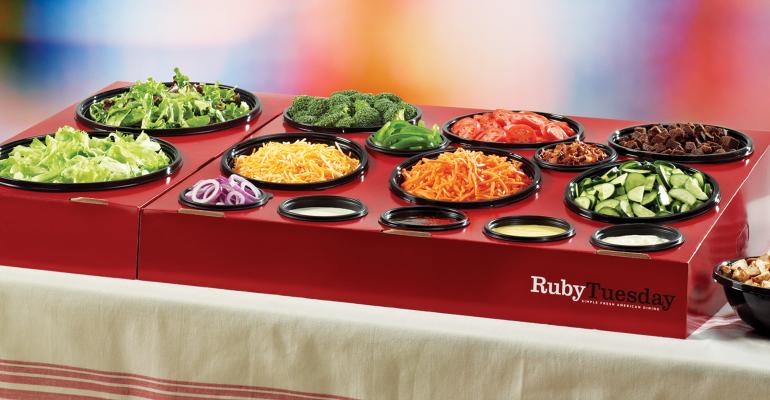 The Maryville, Tenn.-based casual-dining chain is banking on the systemwide relaunch of its Garden Bar on Jan. 17 to help boost traffic and sales, said Lane Cardwell, Ruby Tuesday’s interim CEO and president, in a post-earnings call with analysts Thursday.

“Our Garden Bar adds a level of complexity that our competitors do not have,” Cardwell said. “Because the Garden Bar is not something that can be easily replicated, it remains a unique feature to us and our category and a key competitive differentiator for our brand.”

The company conducted a series of upgraded Garden Bar tests in Atlanta, Charlotte, N.C., and St. Louis, Mo., expanding the offerings from 36 to 58 items, he said. In addition, various price points were tested for the Garden Bar as both an entrée and as a meal add-on.

“Our fresh new Garden Bar is our core strategy to enhance our food offering and reconnect with our target of women and families,” Cardwell said, adding that “approximately half of our guests utilized the Garden Bar when they dine with us either as an add-on or as a main course.”

“We’ve also introduced a line of eight new house-made dressings, salad dressings that are naturally gluten-free and utilize only the freshest ingredients to ensure great taste and high quality,” he said.

Ruby Tuesday’s same-store sales declined 4.1 percent, but customer traffic fell only 2.8 percent and was an improvement from the first quarter, Cardwell said.

“Our various promotional offers during the quarter were aimed at building greater guest frequency ahead of our fresh new menu in mid-November and our fresh new Garden Bar launch in mid-January,” he said, adding that the Garden Bar will evolve as the company gets more guest feedback.

In the second quarter, Ruby Tuesday repeated its three-course meal promotion, supported by television advertising, in November after seeing success in August. It featured the Garden Bar, a selection from among three main courses, two sides and a full-sized dessert for $12.99.

“This promotion was popular with our guests that was more challenging for our operators this time around since it coincided with rollout of our fresh new menu,” Cardwell said.

Sue Briley, Ruby Tuesday’s chief financial officer, said the company’s interest expense in the second quarter was $4.8 million, compared to $5.1 million in the same quarter last year. The company ended the quarter with $38.6 million in cash and $223.2 million in debt.

On Dec. 31, the company filed documents with the Securities and Exchange Commission that it had entered into waiver with Bank of America, Wells Fargo and Regions Bank and was negotiating to amend its senior credit facility.

And on Dec. 30, according to the SEC filing, Ruby Tuesday entered into a mortgage loan waiver with First Tennessee Bank. The company said that as of Nov. 29 it had $14.8 million in mortgage loan obligations outstanding.

The status of those lender negotiations were not addressed in Thursday’s conference call.

Ruby Tuesday has closed 109 restaurants over the past year, which led to a second-quarter 17.7 percent decline in revenues, to $214.7 million. Net loss for the quarter was $38 million, or 63 cents a share, compared to a loss of $14.8 million, or 26 cents a share, in the prior-year quarter.