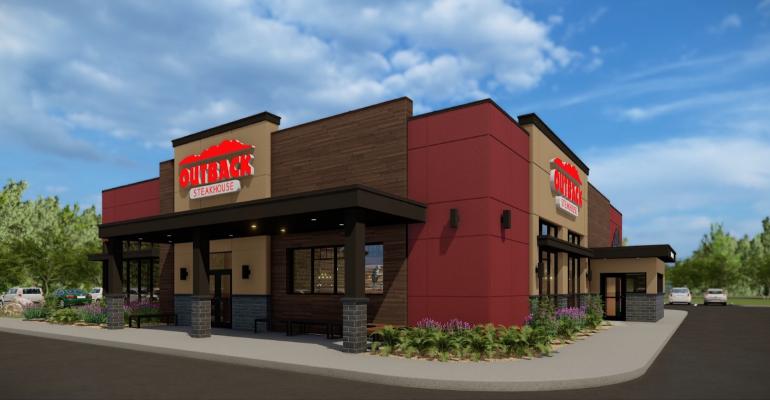 Bloomin' Brands Inc.
Outback Steakhouse has shaved 16% off the size of its unit for a smaller 5,000-square-foot prototype.
News>Casual Dining

Bloomin’ Brands Inc. is introducing a smaller Outback Steakhouse prototype as it anticipates U.S. growth, shaving as much as 16% off the typical unit’s size, company executives said Friday.

“The improvements made over the past several years to enhance the customer experience, simplify execution and capture the off-premises business have strengthened the economic model,” said Mark Graff, Bloomin’ Brands’ senior vice president of business development and financial planning, told analysts.

Graff said Bloomin’ expects to achieve 3% gross unit growth in the next few years, with priorities on Outback and Fleming’s and internationally in Brazil.

A smaller prototype is planned in key markets, such as Florida, Texas and other Southern states, he said.

“We reduced the overall size of the building by 16%, to around 5,000 square feet,” Graff said. “We accomplished this by simplifying the configuration of the restaurant. This included redesigning the back of the house and optimizing the layout of the dining room. Importantly, we did this without compromising the guest experience or the number of tables.”

Recent openings in the company’s “Outback Relocation Program,” which includes about 50 restaurants over the past five years, had sales lifts of more than 35% to an average annual unit volumes of $4.6 million, Graff said. Bloomin’ sees the opportunity to relocate 100 more restaurants, he noted.

“The new prototype integrates the new back- and front-of-house technology enhancements,” Graff said, which improves speed, consistency and execution.

The new units also accommodate growth in the off-premises sales, which now are about 30% of sales, by adding space for those channels, he said. The company reduced the cost of building the new units by about 20%, he added.

“We currently have 23 sites under contract and expect to double our Outback development in 2023,” Graff said.

Bloomin’ also sees opportunities to open more Fleming’s units in California, Florida and Texas, which are three of the top markets, he said.

“Recent new unit volumes have averaged $6 million [annually] and profitability measures are among the highest in the portfolio,” Graff said.

Bloomin’ Brands expects to open 16 Outback units in Brazil this year, he said. “The market remains underpenetrated and the future potential of this business is tremendous,” Graff said. “We have 126 Outbacks open today and believe we can grow to approximately 240 Outbacks over time.”

Graff said incremental opportunities are offered by the company’s non-traditional formats, which include Aussie Grill by Outback and the virtual Tender Shack brand.

“We'll also leverage the learnings from the smaller prototypes and apply them to the rest of the portfolio,” Graff said. “This includes opportunistically building Carrabba's and Bonefish in our core geographies.”

Same-store sales in the quarter for U.S. stores in the combined Bloomin’ domestic system were up 14% with increases of 9.2% for Outback, 11.5% for Carrabba’s, 21.3% for Bonefish and 45.7% for Fleming’s. International Outback in Brazil saw a 35.9% increase in same-store sales.

Bloomin’ Brands, parent to the Outback Steakhouse, Carrabba’s Italian Grill, Bonefish Grill, Fleming’s Prime Steakhouse & Wine Bar, Aussie Grill by Outback and the virtual Tender Shack brand, has more than 1,450 full-service restaurants and off-premises only kitchens in 47 states, Guam and 15 countries, some of which are franchised.

Update June 15, 2021: This story has been edited to correct the name of Carrabba's Italian Grill.