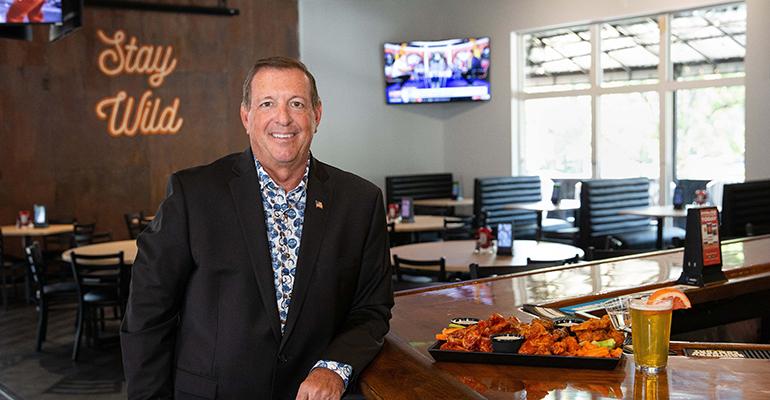 The brand is growing in a unique way

The 40-unit Charlotte, N.C.-based restaurant started out as a small-town entertainment hub before growing to what it is today – and Weigel plans to expand it further.

“I think we could be up to 100 restaurants by 2028, and I think that's just a small piece of the puzzle,” he said. “This brand could be easily 350 restaurants across the country.”

The first Wild Wing Cafe, opened 31 years ago, was a sports party that wound up growing into a restaurant that eventually involved music. But customers didn’t want to leave, so TVs in the space were soon tuned to games and the current model was developed.

Units now feature live music, including established and up-and-coming artists, during non-game times, and TVs show sports when they’re on. Plus, there are lots of wings.

Wild Wing Cafe has developed quite a cult following since the first restaurant.

“It was amazing to see people sitting on our patios, in the midst of a pandemic when they weren't supposed to be but wanted to be as close to the restaurant as they could while they're eating the wings,” said Weigel.

The brand survived during pandemic despite being a full-service concept because of its wings. Wild Wing Cafe’s sales are up 5% year-over-two-year, and the company currently has an average unit volume of $3.5 million.

Wild Wing Cafe and Weigel are not betting on off-premises – Wild Wing Cafe is very much an in-person experience, even going forward.

The cafe spent the pandemic remodeling 15 out of 18 corporate stores while they were closed, designing a better experience for the customer and developing a new prototype.

One of the newest locations of Wild Wing Cafe with the new prototype features two stages – one of which is the back of a ’57 Chevy truck – and 6,500 square feet of space.

But the main attraction is the stage is built on a turntable so it can face indoors or outdoors depending on how the barndoors of the restaurant are opened, bringing music to customers in either spot.

The restaurant is open all day and serves as a community gathering spot, rather than just a dining destination. It’s one of the reasons why Wild Wing Cafe goes into smaller markets.

“I’ve worked for the Dardens of the world, the Bloomin’ Brands where you have the flipping of the dining rooms and that's it, [whereas] we have basically the whole community dining in our restaurant at some part during the day,” Weigel said. “And we touch everyone's lives instead of just a very few that fit into our demographics.”

The restaurant has featured musical acts like Luke Combs in Asheville, N.C. and Zac Brown Band in Augusta, Ga.

“I think that's the unique piece of our brand where music brings people together, and music kind of lets you forget about what side of the world you're on, and you can come across and love the same music and forget about all the other differences people have,” said Weigel.

When the company enters new markets, it’s careful to become a part of the community, not just plop a new restaurant down.

“We want to provide great dining experiences for those communities, and it's even more impactful in a smaller community when you're their restaurant to go-to,” Weigel said.

At the chain’s new Jacksonville, N.C. location, for example, Wild Wing Cafe is looking to the local military base for musicians to open for the larger musical acts.

“We're signing very long leases; we're in it with that community and we want to be part of the success of those communities,” said Weigel.