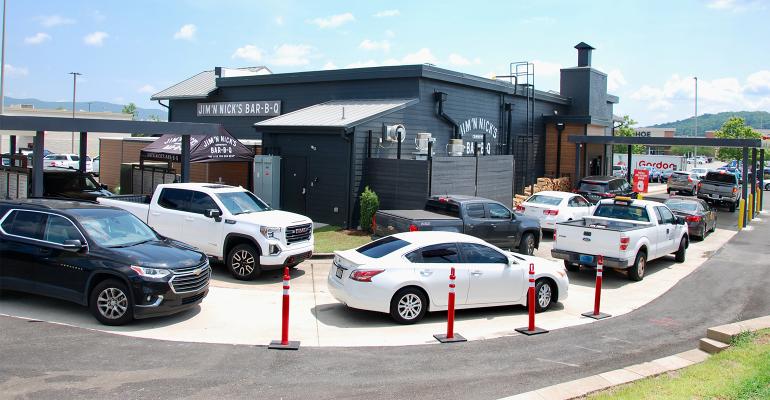 Jim ’N Nick’s opened one store so far this year — in Oxford, Ala. — which features what the company describes as its new “quick-casual plus” format, offering counter service and a full bar, plus a drive-thru window.
News>Casual Dining

Jim ’N Nick’s Community Bar-B-Q has created a new managing partner position to reward its top general managers as it continues to expand in the Southeast.

The 38-unit casual-dining chain has opened one new location so far this year, with two more on tap, and it has plans for seven additional locations next year.

“We obviously have a real-estate pipeline for beyond 2023, but a lot of that … is going to depend on how well things go in the next 15 months, and the external environment as well,” Larry Ryback, CEO of Jim ’N Nick’s, told Nation’s Restaurant News.

Among the biggest challenges the company faces, along with the rest of the industry, is finding and retaining talent. It is seeking to address that issue with highly competitive compensation packages, Ryback said. That includes the creation of new managing partner position, which is essentially a promotion for the company’s top-performing general managers.

­­Managing partners not only receive a higher base salary and a car allowance, but they can also earn higher bonuses and a share of the profit increases at their location. The company has so far elevated 11 of its general managers to the new rank.

“There’s not a limit to the number of them that we’ll have, but they’ve got to demonstrate the ability to run the restaurant at a high-level, be a good steward in the community and live our core values, and lead others,” said Ryback.

He said the company hopes that the new position, which he said elevates top unit managers to among the highest-paid in the industry, creates an incentive for other general managers and acts as a tool for retention. He said the management turnover rate at Jim ’N Nick’s — in the low 20% range — is already well below industry averages.

While the term “managing partner” often implies that the individual has taken an ownership stake by making an investment in the business, that is not the case at Jim ’N Nick’s, Ryback explained.

In addition to the labor challenges, the company is also coping with the current inflationary environment and supply chain disruptions as it seeks to expand its footprint by more than 25% over the next 15 months.

So far, the company has worked to minimize its price increases, despite the cost pressures, which Ryback said has resulted in growth in both sales and traffic. Same-store sales in the past year have been positive, he said.

During the pandemic, the company streamlined its menu, eliminating a few items, so that it can focus on profitable execution, Ryback explained.

The company opened one store so far this year — in Oxford, Ala. — which features what the company describes as its new “quick-casual plus” format, offering counter service and a full bar, plus a drive-thru window. It has also converted a handful of other locations to the new format.

It has another location planned for Foley, Ala., later this year, and one for the Atlanta market. Next year, the company plans to open one restaurant in Huntsville, Ala., and six in Georgia, mostly in the Atlanta area. All of the new locations will feature the quick-casual plus format.

The company also has a presence North and South Carolina and in Tennessee and Florida.

“In the next two years, the majority of our growth will be kind of an infill strategy in markets where we already have a presence,” Ryback said.