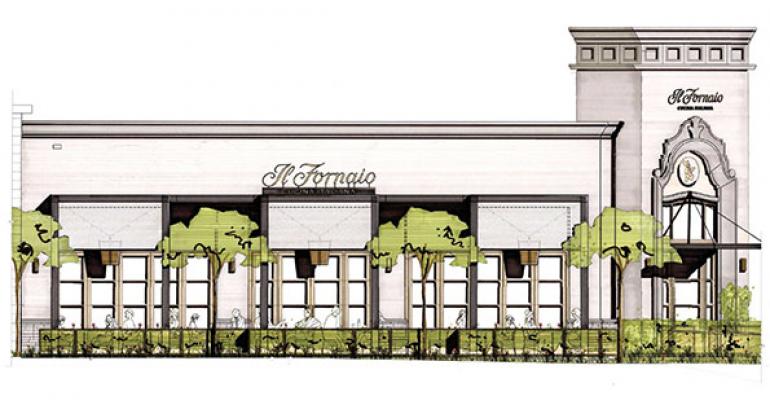 Casual-dining chain hopes to revive the brand for new growth

The casual-dining Il Fornaio chain is scheduled to open a new prototype restaurant this fall that company officials hope will jumpstart new growth.

The new unit in Woodland Hills, Calif., is scheduled to open in September in a new Westfield retail complex called The Village at Westfield Topanga. It’s the first new restaurant the Corte Madera, Calif.-based chain has opened since 2008, and the first since the 20-unit Il Fornaio was acquired in 2011 by Roark Capital Group.

Michael Mindel, Il Fornaio senior vice president of marketing, said the goal is to update the brand with a more casual but modern design — borrowing from elements of a Tuscan farmhouse, with rustic wood columns, terra cotta flooring and less marble.

The 6,200-square-foot restaurant is a bit smaller than typical Il Fornaio locations, he said. “But we think this is just the right size.”

The new unit has no dedicated private dining, for example, and the dining room is designed to be more intimate. At the same time, the new prototype has an expanded bar area with communal seating and a separate patio.

“Bar patronage has skyrocketed in the last few years,” Mindel said. “People are eating more casually than they used to and they love spending shorter amounts of time with less formality in bars, so we’ve built in more space to accommodate that.”

New design elements, like a wall of wine, will emphasize updates to the bar, which will feature more wines on tap, a larger array of beers and new cocktails created by a mixologist, Mindel said.

Also more prominent is the pizza oven and rotisserie, which offers an element of theater as guests watch the pizzaiolos at work.

“We’ve gotten away from those elements in other restaurants, but we’ve been doing thin-crust Neapolitan pizza for decades and we haven’t gotten as much credit for that as we should,” said Mindel.

The chain’s executive chef Maurizio Mazzon is reworking the menu with restaurant chef Giuseppe DiMola. A number of new dishes will be tested, but Mindel said the menu is still a work in progress.

Il Fornaio has an average check of about $25 per person at lunch and $38 at dinner, he said.

According to Nation’s Restaurant News’ Top 200 census, the Il Fornaio America Corp.’s 21 restaurants in fiscal 2014 had sales of $112.9 million, a 0.2-percent increase from $112.7 million the prior year, according to information in franchise disclosure documents tied to subsidiary CBC Restaurant Corp., operator and franchisor of Corner Bakery Cafe.

Mindel declined to speculate on how the new prototype might perform, but he said expectations are high.

“We think because of the visibility in this center and the amount of people and offices in the area, this will be above our unit average,” he said.

Other more systemwide efforts to update the 28-year-old brand are also in the works.

Il Fornaio recently launched a mobile app, for example. Although it doesn’t yet allow ordering or payment ahead, those features will likely be included in the 2.0 version, Mindel said.

But the focus now is getting the new prototype right before putting the accelerator on changes systemwide, he said.

“If this one is successful, we will be back in growth mode,” he said.

Correction: July 11, 2015 An earlier version of this story included an incorrect age for Il Fornaio.