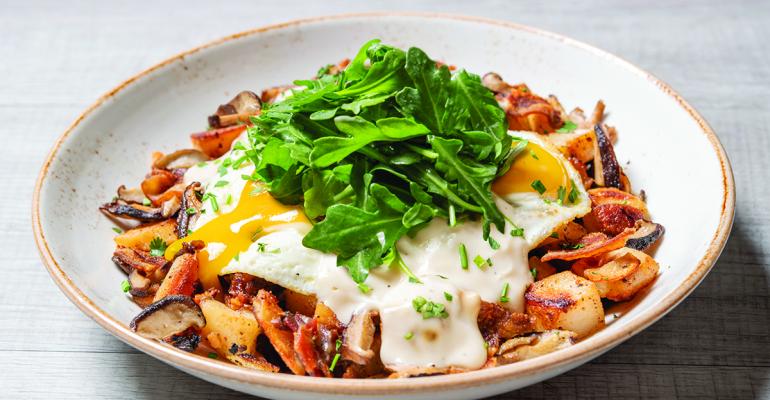 How produce-centric plates are getting a pandemic-era makeover

From mushrooms to cauliflower, chefs are getting creative and thoughtful with vegetables

Produce has become one of the most exciting -- if not downright glamourous -- categories on the menu. Long considered a side-of-the plate commodity, vegetables have gotten a whole new lease on life. They answer consumers’ long-running preoccupations with health and wellness and more recent concerns around the “quarantine 15” pounds, and they address the rise of flexitarian -- or situational vegetarian -- dining.

From the operator’s perspective, they offer an abundance of variety and the ability to cook seasonally and/or locally. What’s more, they’re cost effective and, most importantly, compatible with a wide range of culinary treatments.

Fungus fever. Prized for their nutritional and functional benefits as well as their savory umami, mushrooms are growing on fall menus as appetizers, as with Smokey Bones’ smoked mushrooms finished with rosemary-garlic butter and Carrabba’s four cheese and sausage mushrooms served over tomato cream sauce.

They’re on the center of the plate at First Watch, where patrons can start their day with a limited-time Truffle Mushroom Hash made with roasted shiitake and cremini mushrooms and diced bacon served over potatoes topped with a pair of eggs, Parmesan cream sauce, lemon-dressed arugula, and truffle oil.

The breakfast menu at the Duplex in Chicago features a wild mushroom tostada made with beer-battered-and-fried maitake mushrooms, avocado mousse, tempura-fried shaved almonds, and radish slices. And in a similarly Latino vein, Vivir, a new cafe, market and bakery in northeast Minneapolis, cooks up a luscious Mushroom Cemita: a classic Mexican sandwich presented here on a house-baked, sesame seed cemita roll with melty panela cheese.

Other independent operators are swapping out mushrooms for meat, as at Petite Leon in Minneapolis, where the mushroom birria appetizer is a creative take on the super trendy Mexican stew. At award winning, plant-based Vedge Restaurant in Philadelphia, the smoked portobella carpaccio is finished with a caper vinaigrette and fennel remoulade, while at The Lakehouse near Park City, Utah, king mushroom “BBQ Burnt Ends” are smothered in creamed Cajun sauce.

Creative cauliflower. The past decade has seen cauliflower-- the humble, previously underutilized brassica -- soar to the top of the charts as an alternative ingredient in pasta, pizza crusts and rice dishes. Cauliflower continues its veg-of-choice run on fall menus in snacks and appetizers like Hawthorne, Calif.-based Eureka!’s chargrilled cauliflower with Fresno chile lime vinaigrette and Fox & Hound’s Nashville Hot Cauliflower with ranch dipping sauce.

Other restaurateurs take it into the global kitchen. The walnut-cauliflower “chorizo” tostada at Satellite in Santa Barbara, Calif., is served with refried lentils, cilantro cashew cheese and Napa cabbage; and at Tongue in Cheek in St. Paul, Minn., the summer menu included cauliflower wontons with corn purée and mustard greens.

Amazing maize. Corn has also been the subject of recent reinvention, thanks in part to TikTok, which made corn ribs a thing this summer. According to a report on the subject in Eater, the “ribs,” long strips of kernels cut off the cob, had already appeared on menus at concepts like Momofuku Ssam Bar in New York before their digital (re)discovery. Moroccan Corn Ribs are a side dish at Roger in Mountain View, Calif., where they’re served with sunflower seeds, feta and sumac; and in a nod to their distinctive shape, they appear as Curly Corn at Atlanta’s Wonderkid, where they’re finished with bacon-miso butter and scallions.

Speaking of corn on the cob, elote-- the popular on-the-cob street food in Mexico-- continues to be a source of culinary inspiration here. The limited-time Elote Mexican street corn hash at First Watch brightened up the summer menu with two eggs atop potatoes, roasted summer sweet corn and chorizo. By contrast, the Mexican street corn on offer as a small plate at California Pizza Kitchen is roasted with smoked paprika, feta and Parmesan, served off the cob and accompanied by fresh cilantro, homemade ranchito sauce and grilled sourdough bread. On a related note, Velvet Taco has added elote and chips with blue corn chips to the permanent menu.

Taking inspiration from other parts of the globe, E&O Kitchen and Bar in San Francisco features Famous Indonesian Corn Fritters with sweet chili soy sauce for dipping; while in Chicago, PB&J — which promises Pizza, Beer and Jukebox — features a real global mashup with its elote pizza, which consists of ricotta bechamel, poblano peppers, cotija cheese and, of course-- the eponymous roasted corn.