The casual-dining chain held a systemwide birthday party that included a Hooters Girl reunion for many of the 300,000 women to have worn the orange shorts.

Hooters celebrated its 30th anniversary this month, paying tribute to the restaurant concept that started in a beachside shack in Clearwater, Fla., in 1983 and has grown into a 435-unit chain in 44 states and 27 foreign markets.

In the week leading up to the Oct. 4 anniversary, Atlanta-based Hooters ran special deals to celebrate, culminating in a systemwide birthday party that included a Hooters Girl reunion for many of the 300,000 women to have worn the orange shorts.

“If you’re going to have that beach atmosphere, we thought having the California beach girl theme would offer that kind of escape,” Droste said. “The Hooters Girl outfit would offer a fun twist. The hope was to recreate the beach-meets-Midwest vibe, and the Hooters Girl became an iconic association very quickly.”

Once Hooters became popular with athletes and celebrities visiting Florida, it took off quickly, growing into a national restaurant brand and diversifying into calendars, a magazine, merchandising, a casino and, briefly, an airline. The brand has survived a challenge to its practices of hiring only female servers, two ownership changes, and the periodic downturns in the United States that hit casual-dining brands hard.

Droste remains involved with Hooters through 23-unit operator Hooters Inc., which sold the original trademarks in 2001 to Hooters of America, which then became the franchisor. He said he remains optimistic that the brand’s current ownership will continue to bring its strategic vision to Hooters to keep growing past middle age.

“This is a resilient little brand,” he said.

Take a look at Hooters' logos, servers and units from past to present. 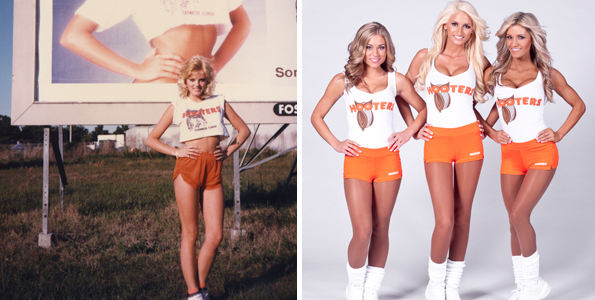