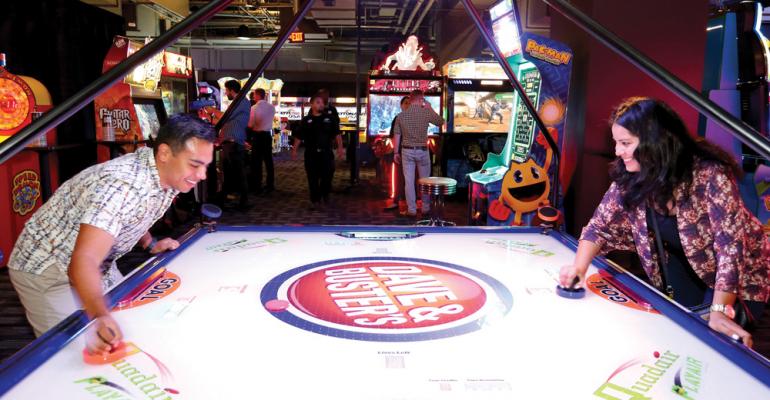 The Dallas-based big-box restaurant-entertainment concept has a pilot of test of a food cart in the arcade with about five items and a beer selection, said Brian Jenkins, Dave & Buster’s CEO, in a third-quarter earnings call.

The company said same-store sales in the third quarter ended Nov. 3 declined 4.1%, with walk-in sales down 4.6% and special event sales up 0.7%. Food and beverage same-store sales were down 4.4% in the quarter, compared to amusements and other sales down 3.9%.

Amid growing competition in the restaurant-amusement segment, Jenkins said Dave & Buster’s is consulting with an outside firm to help meet consumer demand.

“We will be testing our more accessible food offering in our arcade, which will feature new snackable menu options in select locations,” he said. “For our core menu offering, we will continue to evaluate enhancements including test at a more simplified 30-item menu and introduction of several new signature and shareable items.”

The arcade food cart test has been launched without changes in technology at its point-of-sale systems, Jenkins added.

“You will be ordering it from a person,” he told analysts, “so there won't be technology involved other than normal POS at this stage.”

He added that Dave & Buster’s is “really focused on overarching strategy refresh" for the restaurant-entertainment brand.

“We're not going to stop the onslaught of investment coming into the space,” Jenkins explained. Dave & Buster’s has partnered with Toronto-based Jackman Reinvents, which worked on the brand earlier in the decade, to do customer research and behavior.

“Obviously, the behavior we're trying to drive is more guests coming through the door and more frequently,” he said, and part of that is in food.

Jenkins said the company is also looking at social games and is increasing the number that allow for multiple players.

That is why we are testing a physical game opportunity in our stores,” he added, “and when I say physical games, I'm really talking about large format, Giant Jenga, Twister, shuffleboard, cornhole, some of those games, and bringing that into a space to allow for our guests to socialize together with friends and family.”

“We're really looking at trying to have our food, bev and entertainment options collide so we can increase our penetration across the brand. So we're working with urgency across the entire brand to activate these plans right now,” he said.

For the third quarter, Dave & Buster’s net income was $482,000, or 2 cents a share, down from $11.8 million, or 30 cents a share, in the same period last year. The company said income was affected by pre-tax charges totaling $3.3 million related to on-going litigation and corporate restructuring. Revenues increased 6.1% to $299.4 million from $282.1 million in the prior-year quarter.