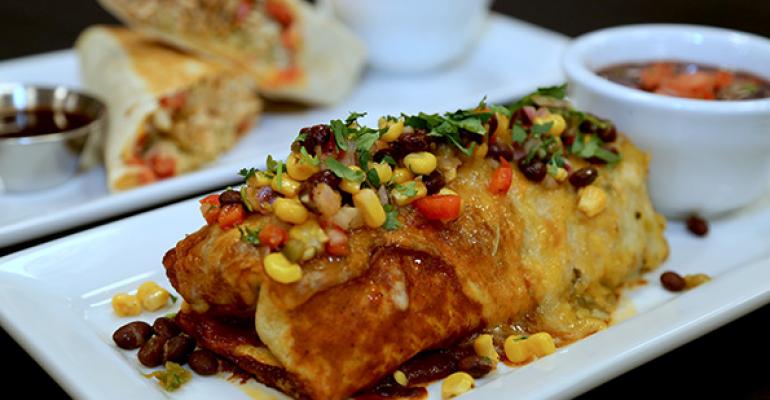 Chili’s to roll out burritos

Burritos will come Aug. 3 for the first time to Chili’s Grill & Bar menus, the brand’s research and development team has revealed.

The Dallas-based division of Brinker International Inc., which sold On The Border Mexican Grill & Cantina concept in 2010, has been building its own Mexican- and Texas-inspired platform with tacos and other dishes to complement the popular Baby Back Ribs and Big Mouth Burgers parts of its menu.

Chili’s also for the first time is adding prime rib as a protein option, the chefs said. The new protein is featured in the Smothered Prime Rib Burrito, which is served with pico de gallo, ancho-chile sauce, green chile sauce and corn-black bean salsa.

The protein will also show up later this year, the R&D team said, with the addition of a new Prime Rib Bowl, served with citrus-chile rice, corn-black bean salsa, pasilla-honey chile sauce and jalapeno aioli.

Chili’s chefs also provided skillet samples of a Triple Berry Crumble Cake that they said was in test for possible addition to the chain’s menu later on.

The new items were unveiled July 23 during a “Chili’s Underground” event at its corporate-campus test kitchen in Dallas, which echoed a similar event in January for media and Internet bloggers.

The January event was a debut for Chili’s “Fresh Tex” menu of reformulated sauces for the chain’s Baby Back Ribs, smoked chicken quesadillas and “Skillet Sides” such as asparagus and cherry tomatoes and potato wedges.

The July “Underground” included several of Chili’s own staff social-media influencers from individual restaurants, who were awarded expense-paid visits to headquarters for the event.

For the most recent March 25-ended third quarter, Brinker International reported a 16.3-percent increase in net income before special items. The company posted a profit of $65.4 million, or $1.02 a share, up from $56.3 million, or 82 cents a share, in the prior-year period. Earnings excluding special items were 94 cents a share, rising from 84 cents in the same period a year before. Revenue increased 3.3 percent, to $784.2 million, from $759.3 million the previous year.

Brinker owns and franchises 1,629 restaurants, including 1,580 Chili’s and 49 Maggiano’s units.