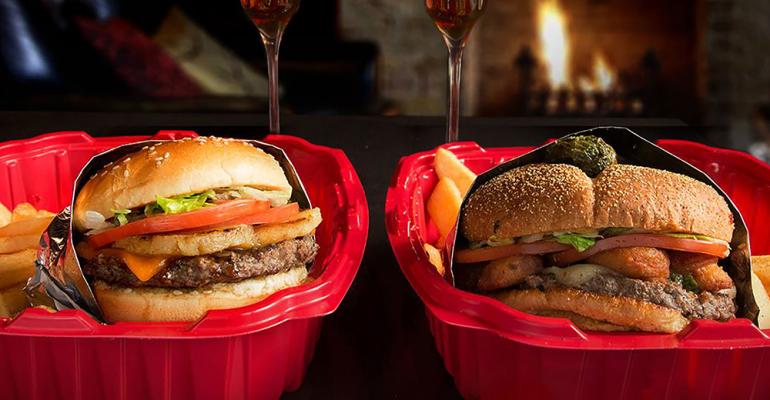 Red Robin
“We have to be everywhere that our guests are,” says Red Robin VP Jason Rusk about the proliferation of digital platforms.
News>Casual Dining

Can tech level the playing field for casual dining?

Soon after Paul Motenko and Jerry Hennessy left the board of BJ’s Restaurants in 2009, the two restaurateurs responsible for catapulting the Southern California-based pizza chain to national growth began crafting their next big concept.

They sought an unprecedented restaurant where diners could customize pizza, burgers and salads. In the limited-service industry, Chipotle Mexican Grill and Subway set the bar for assembly-line personalization. Motenko strived for the same build-your-own experience — but at the table and with multiple classic American foods.

Technology, he recalled, was the key to avoid a Cheesecake Factory-style menu binder. But there was one problem. “The technology didn’t exist,” he said.

The launch of the iPad in early 2010 eventually paved the way for Motenko to create Stacked (above), a next generation restaurant with a new type of tablet ordering system. Now with five units, the Huntington Beach, Calif.-based company has become a pioneer in a sector desperate to digitize its operations to stay relevant amid stagnate sales.

“It’s this Amazon effect,” said Jason Rusk, vice president of business innovation at Greenwood Village, Colo.-based Red Robin. “We have to be everywhere that our guests are.”

State of the industry

Restaurant same-store sales fell for the second month in a row in February, marking the industry’s worst month since September 2017, according to TDn2K’s sales snapshot report of roughly 30,000 restaurants.

Despite an uptick in consumer confidence, traffic also fell 3.1 percent in February. In terms of sales, quick-service chains are growing, but at the expense of casual dining. “You’ve got to play their game,” said Burke, whose firm specializes in financial services for multi-unit restaurant companies and franchisees.

And, the sport of choice for the so-called Letter Generation is one where convenience, customization and speed are rolled into one.

On demand from the couch

The popularity of restaurant delivery has been one of the few measurable bright spots for casual dining.

Delivery in the sector increased 23 percent to 93 million orders in 2017. That’s up from 76 million transactions in 2013, according market research firm The NPD Group.

“It’s the only growth area for them. There’s nothing else growing,” said NPD restaurant analyst Bonnie Riggs.

The 26-unit Lazy Dog Restaurants, which recently opened its second restaurant in Colorado, started selling its food through DoorDash and GrubHub last year. Founder Chris Simms said delivery has resulted in incremental sales and brand awareness, though he could not provide specific data.

He said third-party operators have given casual dining the unexpected opportunity of showcasing their menu alongside limited-service players.  As a result, casual dining can now compete on speed and convenience, attributes the sector has been hard-pressed to promote.

Still, delivery can be a bitter pill to swallow for operators, who face double-digit fees from third-party vendors. Also, check averages tend to be lower compared to dine-in sales where servers can upsell pricier entrees, appetizers and alcoholic drinks.

“It’s expensive to do, but you can’t afford not to do it because habits are changing,” Stacked’s Motenko said.

Though there’s concern delivery comes at the risk of foot traffic, most casual-dining operators interviewed by NRN say cannibalization is not an issue. They see dine-in and off premise sales as two distinct meal ordering opportunities.

In some cases, chain leaders say delivery sales are making up for overall declines in restaurant visits especially during inclement weather.

“Those actually are heavy [delivery] days, so it balances,” Red Robin’s Rusk said.

Meal ordering at your fingertips

While off-premise sales are exposing casual-dining brands to younger audiences, those strategies aren’t solving the dining industry’s No. 1 challenge: frequency.

Restaurant visits have been flat the last two years following a 1 percent increase in 2015, NPD reported in March.

Among the contributing problems: there’s not enough consumers to support an oversaturation of restaurants. Tablets have been around for several years, but are gaining momentum as options and software become more sophisticated. In 2017, Ziosk tablets were used to generate $8.9 billion in restaurant transactions, up from $5.64 billion in 2015.

Instead, they are using them to leave a lasting impression.

Tablets have proven to solve classic service issues, including flagging down a busy server to order a beverage or pay the bill. End-of-the meal surveys also give managers real-time feedback so they can course correct when there’s a breakdown in customer service.

“We’re not here to shake people upside down and grab every penny. It’s about delivering a great experience,” Rusk said.

He said Red Robin relies on its tablets to settle payments, and to assist servers with taking orders for items such as drinks and appetizers. The chain completed its tablet rollout at some 560 restaurants in late 2015.

Around the same time, Darden International-owned Olive Garden completed its rollout of tablets. The year before, Chili’s, owned by Dallas-based Brinker International, finished the rollout of its tablets at 823 company-owned restaurants.

Jessica Dinon, a spokeswoman for Orlando-based Darden, said Olive Garden diners have enjoyed using the tablets to “control the pace of their meals.”

She underscores the sentiment of operators interviewed by NRN. They said tablets should always be a hospitality enabler — and never intrusive or frustrating.

“Technology when it helps the guest. Humanity when it’s better for the guest,” said Motenko.

The expanded features of the E la Carte-powered tablets will include better food imagery, graphics and more games. The chip-enabled tablets also will let diners make mobile payments with virtual wallet programs such as Apple Pay.

At Stacked, the iPads provide uber personalization of meals but can also save diners a few pennies. The drag-and-drop interface lets diners build each entree ingredient-by-ingredient.

If you order a pre-set burger and choose to swipe away or remove any topping such cheese, the tablet will knock off the cost of that ingredient.

Over the last several months, the industry is seeing other trends emerge including virtual waitlists and voice-assisted ordering.

Yelp recently integrated Yelp Nowait on its consumer review site. The virtual waitlist is available on the site at 4,000 restaurants including Chili’s and Dave & Buster’s. Diners who use the Yelp app can check on table times, and add their party to a wait list without stepping foot in the restaurant.

Hands-free ordering is another frontier.

In March, customers craving a Grand Slam can now order from Denny’s by shouting commands at Amazon Alexa.

The Spartanburg, S.C.-based company launched the voice ordering technology as part of its Denny’s on Demand initiative. Since rolling out an Olo-powered app for off-premise sales last May, Denny’s said it’s logged more than 1.3 million orders.

Ultimately, operators say these fingertip and touchless solutions are crucial to remain relevant in a digital-driven society.

“When we do it right, I believe it’s the perfect restaurant experience,” Motenko said.

Correction: March 19, 2018 This story has been updated to correct the name of Ziosk's CEO.