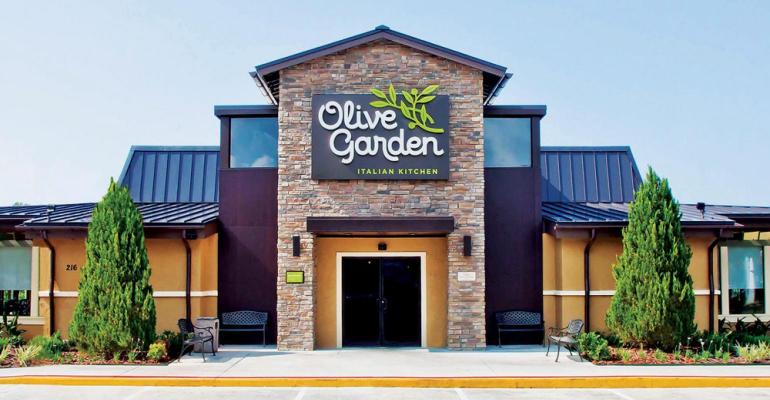 As Darden Restaurants Inc. anticipates its announced leadership succession, the parent to Olive Garden and other casual-dining brands is also moving up a planned team-member wage increases by a year, executives said Friday.

The Orlando, Fla.-based company, which also owns the LongHorn Steakhouse, Cheddar’s Scratch Kitchen and other full-service restaurant brands, had in March announced bonuses and an increase to $11 per hour in January 2022, but the original planned 2023 timetable has been accelerated, executives said.

“Earlier this year, we committed to increasing the minimum hourly earnings for our restaurant team members to $12, which includes income earned through gratuities by January 2023,” said Rick Cardenas, the president and chief operating officer who will be taking over the CEO reins from Gene Lee, who will retire May 29. Lee will remain chairman.

“However, given the strength of our performance, we are accelerating that timing to January 2022,” Cardenas said Friday in a second-quarter earnings call with analysts. “This primarily impacts entry-level roles such as hosts, bussers and dishwashers. And with this change, we expect our restaurant team members will earn, on average, approximately $20 per hour.”

Cardenas said people are the key to Darden’s performance. “We work hard to be the employer of choice in our industry, and we're proud that our retention rates for managers and team members are both in the top quartile, and we will continue to invest in them to retain and attract the best talent in the industry,” Cardenas said.

Lee noted that the increase would impact team members at Cheddar’s Scratch Kitchen more than the higher-check-average brands. Cardenas and Lee said labor issues had been isolated, with restaurant staffing looking better with each quarter since the pandemic was declared March 2020.

Wage rates do vary by geographic region, he noted. ”Starting wages or wage rates vary very, very much depending on geography and overall demand. We have people that … make $25 to $28 an hour in the back of the house,” Lee said. “And in some parts of the country, you're doing that same job for $18 an hour, depending on the environment.” The company has about 170,000 employees.

Cardenas said Darden is at about 95% of pre-COVID staffing levels, up from about 90% at the end of the first quarter.

“We continue to increase that percentage,” he said, adding that productivity increases have led the brands to need fewer workers per restaurant than in past years.

“A majority of our restaurants are well staffed,” Cardenas noted.

On the CEO succession, Lee said: “This is the right time for this transition, and I look forward to continuing to serve as Darden's chairman. Our company is in a clear position of strength, and this is also the right time for me and my family.

“I'm excited for Rick, who's been a tremendous partner over the last seven years and is one of the best strategic thinkers I've worked alongside,” Lee said.

Cardenas said he was fortunate to have worked with all of Darden’s CEOs. His first job at Darden was in 1984 as an hourly employee.

“I have a strong appreciation for the legacy of leadership I am inheriting,” he said on the call. “By upholding our commitment to operational excellence and maximizing the power of the Darden platform, we will continue to execute our strategy to drive growth and shareholder value.”

During Darden’s second quarter, its brands’ to-go sales continued to increase, especially with what Cardenas called “the strength of our digital platform.”

Darden executives said they expected off-premises sales to settle in higher than an earlier expected 20% and dine-in sales will continue to rebound.

“We believe that in the long run, we'll get back to our pre-COVID levels of on-premises experiences as we continue to invest in our food as we continue to increase our staffing levels, as people become more confident and comfortable going out to eat,” Cardenas said.

Commodity price increases were being managed, the executives said, inflation for commodities and labor was 6% in the second quarter, said Rajesh Vennam, Darden’s chief financial officer. Darden brands took total price increases of 2% in the second quarter and expects “back-half pricing to approach 4%, resulting in total pricing of just under 3% for the full fiscal year,” he said.

“We're talking weeks, not months, a couple of weeks here or there,” Cardenas said. “We may have a restaurant or two that might go a little bit longer than that, but on average, we're a few weeks. And we are starting to order a lot of these long-lead-time items a lot sooner, and actually holding them in inventory, which not driving our inventory costs up, but making sure that we have the kitchen equipment to open the restaurant when the restaurant is ready to open.”

Same-restaurant sales by segment for Darden’s consolidated restaurants were up 34.4% with increases of 29.3% at Olive Garden, 31.2% at LongHorn, 61.6% among the fine-dining brands and 42.9% in its other business.