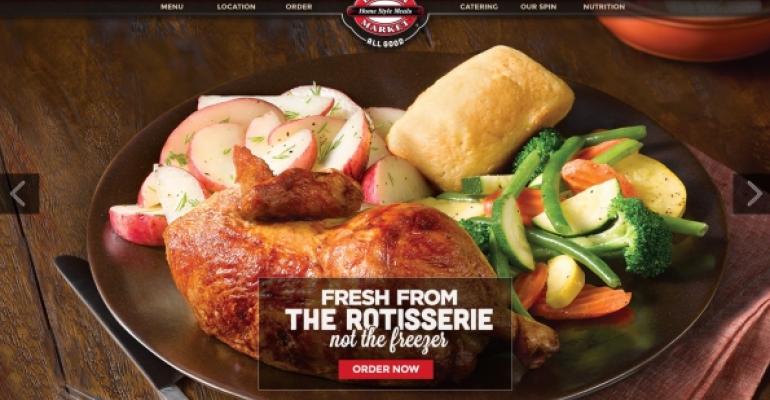 Boston Market launched a marketing campaign Monday that focuses on its all-natural, never-frozen rotisserie chicken, raised without added steroids or hormones, and urges customers to “take a side against fried.”

Sara Bittorf, Boston Market’s senior vice president and chief brand officer, said the chain’s chicken has long been delivered “fresh from the farm,” without being frozen or with added steroids or hormones, but consumers may not be aware of the product’s quality.

“We felt like people’s concerns about food and wanting to eat better are coming to the forefront, and it was time to make sure that message is getting out,” Bittorf said.

Although Boston Market is fast casual, the ads take shots specifically at quick-service chicken players. Brand names are not mentioned, but there are references to chicken made to fit in cup holders, burgers, tacos, pizza and chicken nuggets.

In recent weeks, a number of chains have promoted “cleaner” ingredients in an attempt to tap growing consumer demand for food that is less processed.

Chains like Panera Bread, Taco Bell, Pizza Hut and Chipotle Mexican Grill have recently touted the removal of artificial additives and preservatives from its ingredients. Chipotle said it has removed most genetically modified ingredients from its menu, and McDonald’s has pledged to shift to using chicken raised without human antibiotics.

Going human-antibiotic-free by 2017 is also a goal for Boston Market, and the chain is working with its chicken suppliers on that effort, Bittorf said.

In addition, the brand has asked the Anschutz Health and Wellness Center at the University of Colorado to conduct an audit of ingredients used across its menu to see if there are things that need to be removed, Bittorf said.

The first consideration will be safety, but Anschultz will also look at t ingredients that might be making consumers uncomfortable, even though science might indicate they are safe.

“We’ve always had a no-no list, if I can use that language, but people’s awareness and tastes are changing,” Bittorf said. “We’ve asked Anschutz to look at this through the consumers’ eyes. We may decide an ingredient is safe, but we want them to look at things like, does it sound safe, does it feel safe or does it make consumers uncomfortable?”

Initially, the audit will focus on certain ingredients identified by the Center for Science in the Public Interest, or CSPI, as worth avoiding, including certain food dyes, aspartame, caffeine and other commonly used ingredients. CSPI also advocates against the excessive use of salt, sugar, high-fructose corn syrup and partially hydrogenated oils.

At Boston Market restaurants, customers can earn a free side dish with the purchase of a rotisserie chicken individual meal, Bittorf said.

Those who show their love via social media with the hashtag #RotisserieChickenDay will also find some surprises and delights, although those were not specified.

Through the summer, basketball star and mom Lisa Leslie will serve as a brand spokesperson for Boston Market.

Bittorf said Boston Market also recently relaunched an online ordering platform that allows customers to order and pay ahead. It can also be accessed by smartphone.

“We think that’s a huge opportunity because three-quarters of our business goes out the door” as takeout, Bittorf said. “We’re the greatest choice for the ‘what’s for dinner?’ question.”

Boston Market is also testing car-side delivery, and about 200 of the 456 restaurants have drive-thru windows.

The chain has tested home delivery in urban markets, with in-house staff delivering, but it hasn’t been very successful, Bittorf added. The brand is likely to rework the model, perhaps using a third-party delivery service, to test again.

“We will look at any way to conveniently get our food to people who want it,” Bittorf said.