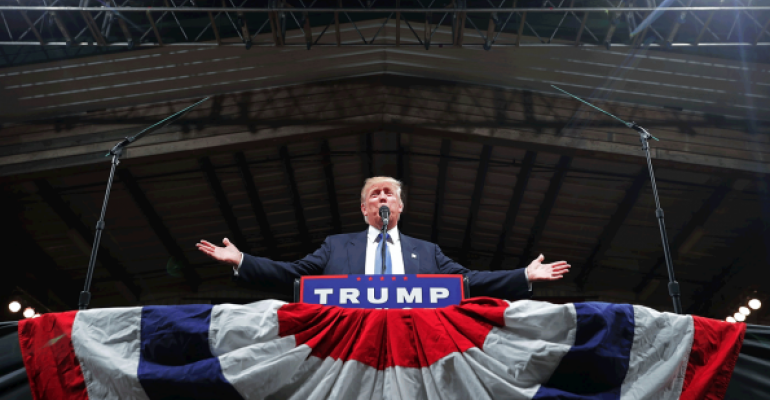 Not that long ago, investors were avoiding restaurant stocks like the plague, punishing companies for seemingly minor indiscretions and concerned about the state of sales and costs.

And then the election happened.

The stock market has rallied in the days since the election. The S&P 500 is up more than 2 percent since voters put Donald Trump in office, along with a Republican Congress.

Restaurant stocks have gone right along with them. The NRN Restaurant Index is up nearly 5 percent since the day before the election, having risen in six of seven trading days.

That rally has completely wiped out what had been a difficult year for the industry on Wall Street, and there are more winners than losers, year to date. For the year, restaurant stocks are up 2 percent, according to the index.

To be sure, companies that are still down this year are really down. Ignite Restaurant Group Inc., struggling with poor sales and financial losses all year long, is down nearly 93 percent entering Friday trading, despite a recent rally.

Rave Restaurant Group, whose fast-casual pizza concept Pie Five has been struggling with sales, is down more than 75 percent. Both Papa Murphy’s and Noodles & Company are both down well over 50 percent on the year.

There’s a general view among some observers that Republicans could provide the economy with a short-term stimulus in the form of lower taxes next year. In addition, they could reduce regulations that seemingly hurt restaurants as much as any other industry — though it remains to be seen whether they will ultimately dismantle the Affordable Care Act, as promised.

Indeed, operators and speakers at the recent Restaurant Finance and Development Conference were optimistic that a Trump administration could put a halt to the “restaurant recession.”

The result seems to be giving an excuse for consumer investors to put their money back into restaurant stocks.

Still, for all of those faults, restaurants don’t have the problem that other retail sectors do in the form of Internet-based competition — Internet companies like review sites and delivery companies are generally viewed as restaurant industry helpers, rather than major threats to their business models.

As such, investors who might otherwise put their money into retailers like Abercrombie and Fitch are instead betting on restaurants — believing that, perhaps, the worst is behind them, or at least most of them.