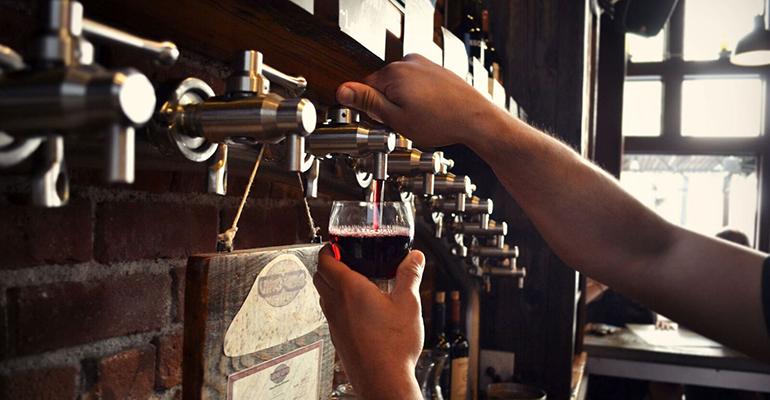 Wine on tap is emerging from the shadows. Over the past 10 years, it’s gone from fad to staple on menus, offering benefits to consumers and operators. Today, companies have sprung up to help restaurants get their wine-on-tap program up and running, but it wasn’t always this way.

Adam Jed, co-owner of Bluestem Brasserie in San Francisco, was an early adopter of wine-on-tap ten years ago, and at the time, he had to build his own wine refrigerator in the restaurant.

But once his wine-on-tap program was established “it was pretty easily embraced and most people, once they realized the sustainable value of it as well as the quality, embraced it right away.”

“The biggest draw to [wine-on-tap] was quality and increasing the quality of our wine by the glass” said Jeffrey Amoscato, vice president of supply chain and menu innovation at New-York-based Shake Shack.

Because wine is not a big part of Shake Shack’s sales, a keg of wine that stays fresh for three months after tapping just makes good business sense, Amoscato said.

And wine on tap is easy to pour. “We’re not employing wine serving professionals, we’re employing fast casual workers who wouldn’t be typically be opening wine bottles every day in their life, so it just made it an easier operation for our team to work through,” Amoscato said.

Restaurants that do brisk wine business benefit from the convenience of wine on tap during rush times. 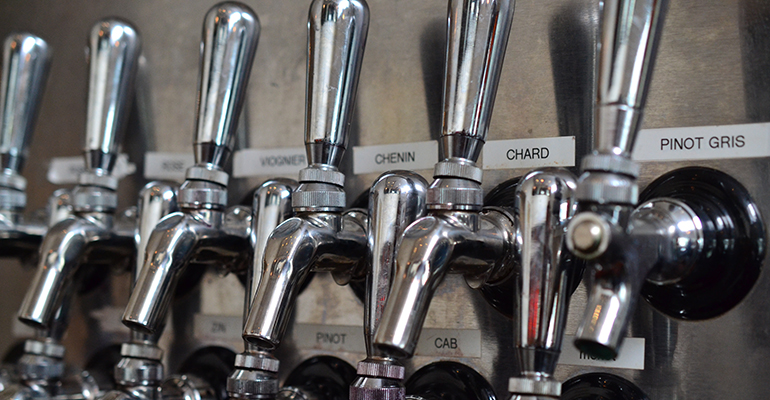 At Snooze Eatery, a Denver-based breakfast-focused chain with 30 units, CFO Bill Long said, “from an operational perspective, it’s a lot easier. It creates more efficiencies for us, being able to crank out 100 mimosas on a busy Sunday, doing it off a tap versus opening up 50 bottles of wine.”

Mimosas, make up a majority of alcohol sales at Snooze, Long said. The money saved by using wine-on-tap allows Snooze to create a higher quality sparkling wine at the same price range as an inferior brand, said Long.

“We’re able to offset some of the cost and create a better product.”

Today, a market has emerged to bridge the gap between the wineries and the restaurants. Free Flow Wines and Gotham Project, which works with Shake Shack, are two companies that serve as a middle-man of sorts to the burgeoning industry, working to assist those who are on board and educate those who are unaware of the benefits of wine on tap.

These companies exist to serve as guides for the interested restaurateur or operator or as an agent of the winery. They work to make sure the process of installing wine on tap goes smoothly, planning every detail with the operator. Gotham Project lays out the plan for an operator, down to the price per glass. When comparing the same wine in kegs and bottles, a glass of wine from a keg costs about 13 percent less, according to the company. Free Flow Wines works for the wineries, getting wineries on board with the process and getting their kegged wines into restaurants. 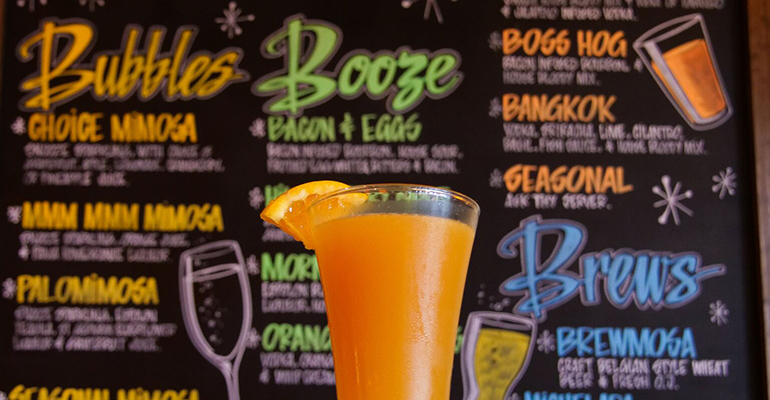 Snooze Eatery uses a sparkling wine on tap for mimosas, which which make up the majority of its alcohol sales.

Vendors in this burgeoning market have spent years developing offerings that would work for restaurant operators.

The initial roadblock to wine-on-tap was materials. Wine requires a different system than beer. Wine proved to be too acidic to work in a traditional beer tap system, eating through the chrome-plated brass and leaving a sulfur taste in the wine. 304 stainless steel, a material that’s able to withstand the acid found in wine, solves that problem.

Other than the steel, the tubing has to be altered for wine, suppliers said. High-grade barrier tubing was necessary to ensure that the wine isn’t exposed to any oxygen.

Lastly, the gas used in wine-on-tap is different from beer. Rather than use CO2 to carbonate the liquid as beer does, wine needs a mix of 75 percent nitrogen and 25 percent CO2.

Companies like Micro Matic, a manufacturer that specialize in dispensing systems for wine and beer, use 304 stainless-steel across all of their draft equipment, making it suitable for both wine and beer.

And installing a system like this with four taps is about a $3,200 investment, according to Gotham Project.

Consistently, the glass of wine from a keg is going to be the same from the first sip to the last, according to Jordan Kivelstadt, co-Founder and CEO of supplier Free Flow Wines. The wine is preserved at its first state, unchanged from the moment it enters the keg. Not to mention, most kegs and tap systems are temperature controlled so wines remain at their ideal temperature. 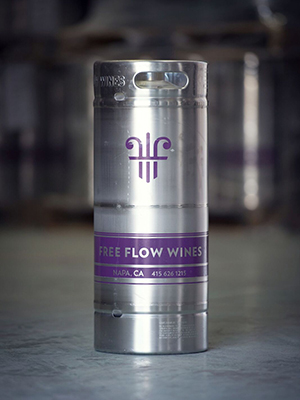 Less than 30 percent of glass wine and liquor bottled are recycled, according to the Glass Packaging Institute. So, kegs are often a better choice for the environment.

Kegs have an infinite loop of reusability and, in some markets like New York City where removal of kegs posed a unique challenge, companies like Free Flow Wines run their own vehicle around the city, collecting empty kegs to take back to their New Jersey facility for refilling.

With a keg, an operator must make more of a commitment to a specific wine — one keg of wine is the equivalent to 26 bottles of wine — but with that commitment comes a reduction in pricing.