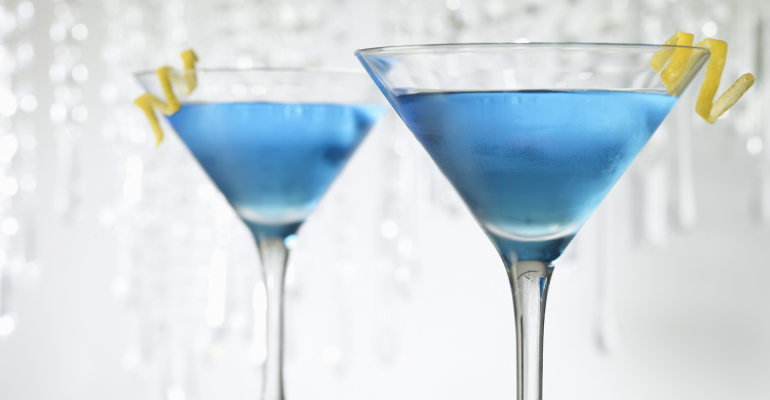 Blue-hued food and drinks — once an unappetizing faux pas — make their way onto menus in the form of creative cocktails, smoothie bowls, and novelty ice creams

For a long time, the color blue was taboo in the food world. It was shunned by many photographers and stylists for its supposed appetite-suppressing qualities, while others objected on the grounds that true blue fruits and vegetables don’t exist in nature, that what we perceive as blue is actually purple. As a result of these claims, blue was effectively blackballed as an unnatural, unappealing food color.

Its transformation into one of the hottest hues on the menu likely started when dietitians anointed blueberries a so-called “super food,” thereby generating a buying frenzy that led to a temporary shortage of the fruit around the country. At about the same time, interest in the cuisine of the Southwest led to rediscovery of Hopi maize, the bluish-purple corn found throughout the region.

The most recent boost to blue came from the color gurus at Pantone, who pronounced Classic Blue their official Color of the Year for 2020. Fashion mavens and interior designers took note, but restaurant chefs were way ahead of the game. They’ve actively embraced blue in a range of shades from pale aqua to deeper indigo.

Blue beverages. Cutting-edge drink developers definitely have the blues. First Watch, the 300-unit, daytime café chain based in University Park, Fla.,  has offered a limited-time Blue Booster nonalcoholic drink made of white grapes and blueberries with lemon and basil, while the signature Skinny Lemonade and Blue Butterfly T combo at the Los Angeles-based, 14-unit Lemonade chain uses trendy butterfly pea flower, a Southeast Asian plant that is prized for both its stress reducing qualities and its color-changing blue-purple tint. 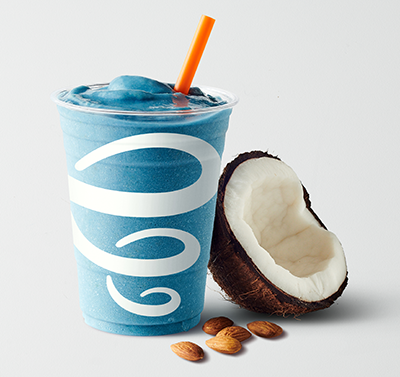 Some blue-hued beverages make for affordable, drinkable escapes. Ocean Water, the long running favorite at Sonic Drive-In, evokes tropical islands with its hint of coconut, while Steak ‘n Shake’s promotional cotton candy milkshake, which starts with blue cotton candy syrup and is finished with whipped cream and a cherry, connotes a carnival.

Blue bars. Mixologists began using blue Curaçao decades ago in campy umbrella drinks, and the return of the tiki bar has given a second wind to the orange-flavored liqueur that gets its distinctive color from food dye.  However, when Chef’s Special Cocktail Bar opened in Chicago in February (Chef’s Special Cocktail Bar) it created buzz with its neon-colored cocktails that eschewed the artificial in favor of the natural. The signature drink Blue Moon, for example, combines house-made sour mix with spirulina and tequila.

The limited-time Blarney Blast menu from Irish pub-themed 33-unit chain Bennigan’s included the Irish Rainbow, a layered cocktail of many colors, one of which was blue Curaçao, while last year, Applebee’s launched the Shark Bowl, a bright blue slushy made with rum and topped with a gummy shark.

Blue foods. Blue dishes have been somewhat slower to take off, and many of the newer items are in the better-for-you category. At Great White, a fast-casual, coastal-California themed operation in Los Angeles, diners can breakfast on the blue smoothie bowl with tropical fruits, house-made granola and live blue algae. Wow Wow Hawaiian Lemonade Stand, with 10 locations in the Western US and Japan, features rainbow-hued bowls from pink to purple to the Blue Hawaii, which marries a mélange of fruits with coconut butter, almond milk, granola and blue spirulina.

Most blue-toned foods are more playful, perhaps taking their lead from electric-blue cartoon Smurfs, who invaded supermarket shelves with Smurf-themed cereals, cookies and candies after premiering in the 1980s.

The origins of Blue Moon ice cream, a regional specialty in the Upper Midwest, are a little hazy, though many sources point to a food chemist in Milwaukee as its creator. An enduring favorite in the region, when combined with red and yellow ices, it pays homage to another animated hero. The Superman, promoted in some venues as Scooperman or Super Scoop, swirls Blue Moon with black cherry or strawberry and lemon ice creams to conjure the cape worn by the Man of Steel.