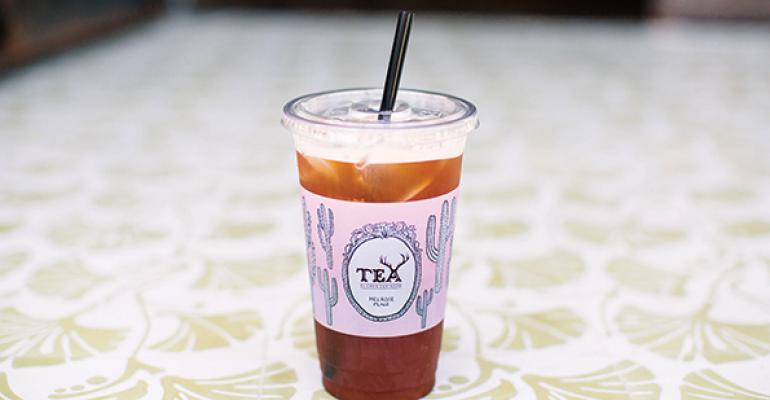 Iced tea bubbles up beside soda

The chilled beverage emerges to make up for slumping soft drink sales.

Restaurants are innovating with iced tea, and finding that the chilled beverage can take up some of the slack from declining soda sales.

Soda and tea have opposing reputations with consumers. Soda is considered unhealthful and unnatural; even sugar-free varieties get flack for artificial sweeteners, colors and preservatives. But tea is seen as a natural product that is high in antioxidants. Even sweet tea, for which it’s common to use a pound of sugar for every gallon of tea, has a health halo.

Some operators are responding to changing consumer preferences and slumping soda sales by experimenting with tea, and even offering the beverage in sparkling form to bring new life to soda fountains.

Soda sales are at a 30-year-low, according to a recent report from Beverage Digest, a provider of news and data about the non-alcoholic beverage industry. Americans still drank about 650 8-ounce servings per person in 2015, according to Fortune magazine, but that’s the lowest consumption level since 1985.

By comparison, the USDA Economic Research Service puts per capita tea consumption at about 134 8-ounce servings as of 2013.

Most of that tea is iced. The Tea Association of the USA reports that 85 percent of tea consumed in the country is iced tea. And foodservice beverage supplier S&D Coffee & Tea says almost all of the tea consumed in restaurants — 95 percent — is iced.

At this year’s NRA Show in Chicago, two companies exhibited tea concentrates designed for the soda fountain. Others provided pre-made tea in kegs.

Josh Zad of Alfred Tea Room in Los Angeles prefers a keg. His supplier, Smith Tea, brews a strawberry honeybush tea that is carbonated and delivered in kegs.

“The fact that it’s kegged means that it’s to the specifications of Smith Tea. We don’t do anything but lock it into the machine. It’s just how it’s intended to be served,” Zad said.

“We wanted to be one of the first people to carry it in L.A., and it was just too tasty, novel and original. It was a new element to our tea game,” he said.

At trendy coffee houses, nitro coffee is all the rage. To make it, chilled cold-brew coffee is infused with nitrogen, giving it a consistency and mouthfeel similar to stout beer. Nitro coffee has become so popular that large chains such as Caribou Coffee, The Coffee Bean & Tea Leaf and Starbucks offer it at some locations.

At Alfred, Zad applies nitrogen to chai tea. As with sparkling tea, he buys chai in kegs, but he attaches a nitrogen infuser to the tap head.

“It comes out very frothy, like a Guinness almost, or a nitro cold brew [coffee]. It’s eye catching, and the flavor has a classic masala chai element,” he said.

The Drake Hotel in Toronto takes a different approach at Drake General Store, which brews tea on-site and fills its own kegs, then dispenses the tea via nitro tap.

“The bubbles go through it and it has a nice feel ... almost of a crema on top,” public relations manager Jessica Rodrigues said.

“In the warmer states, and California specifically, they’re interested in having an iced tea on tap,” Brady said.

There are other ways to lend glamor to tea besides adding bubbles to it, Brady said. She is currently doing a pop-up tea shop at the Gansevoort Market in New York City, where she makes iced tea using loose leaves in a French press, “because it adds such a beautiful element,” she said.

“They can actually see the leaves expand and grow, so it really adds a bit more of experience for the customer,” and helps her to justify charging more, she said. Additionally, the French press allows for a better release of tea flavor because the leaves have room to expand.

Brady uses twice the usual amount of loose-leaf tea to make iced tea because it is diluted when poured over ice, she said.

At larger chains, one of the leading champions of iced tea is McAlister’s Deli, based in Alpharetta, Ga., whose sweet tea has been a top seller for years.

In March, the 360-unit chain introduced green tea. Robert Dimson, McAlister’s vice president of marketing, said in an email that research into consumer perceptions of green tea found that offering it could benefit the reputation of the chain itself.

“We found that the benefits of drinking green tea could have a halo effect on our brand,” Dimson said. “In addition to the health properties that green tea has, the flavor profile fit with our guests’ desire of a very refreshing beverage.”

Green tea is available sweetened or unsweetened, and either plain or with light mango flavor.

In the past, McAlister’s experimented with an artificially sweetened green tea that did not perform well with customers. But opinion of the new, cleaner-tasting version is “very favorable,” according to Dimson, “and sales are incremental, with very minimal cannibalization of our black tea. Water incidence has also dropped.”

S&D, citing NPD/Crest data, reports that the vast majority of iced tea sold is unflavored — 80 percent in limited-service restaurants and 90 percent in casual-dining restaurants. But some operators find that flavored teas allow them to distinguish themselves from the competition by offering something unique.

David Burke Kitchen in New York serves Gingerade, made by blending two ounces of iced tea with an ounce each of ginger puree and lemon juice, and half an ounce of honey syrup. The mixture is shaken with ice, strained into a highball glass and served with a lemon wedge.

“I created the Gingerade as part of our non-alcoholic house sodas as an option for those craving a fresh, new alternative to traditional sodas and [other] non-alcoholic options,” beverage director Jason Galang said. The drink sells particularly well in the restaurant’s garden, he noted.

The Signature Room in Chicago does a stylized and lightly carbonated version of the classic Arnold Palmer, a blend of lemonade and iced tea.

For the drink, iced tea, lemonade and blood orange are shaken together, poured over ice and topped with soda and an orange slice.

“We added the blood orange to put a spin on the classic,” marketing manager Lauren Cullnan said. “The soda adds some light refreshing bubbles, giving it more of a true cocktail feel.”

She added that customers like how the drink is familiar at its core, “and yet it still allows them to experience something unique, creating a memorable experience.”

The health halo of matcha

Other operators are veering more toward healthfulness by using the increasingly popular matcha — a powdered Japanese tea that, since the tea leaves themselves are actually consumed, is believed to provide even more antioxidants than other teas.

Protein Bar, an 18-unit chain based in Chicago, uses matcha in its Avo-Matcha smoothie, which has been one of its most popular menu items since it was introduced in spring 2015.

The drink combines a choice of vanilla protein powder (whey, soy or raw vegan) with a choice of milk (2 percent, skim, almond or coconut), along with avocado, matcha powder, organic raw honey and crushed ice.

“It reminds me of a pistachio milkshake,” Teddy Heidt, Protein Bar’s head of brand culture and communications, said, adding that the item does very well on social media. “It was generating a lot of buzz and getting a lot of attention.”

“The flavor is very nuanced. It tastes fragrantly green, a bit earthy and slightly bitter, and it is a really cool color,” Khaund said. “Once one is ordered, other guests ask what it is, then order it themselves.”