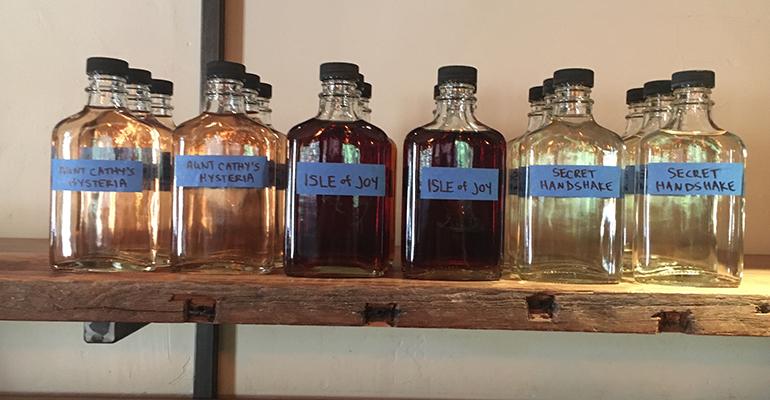 Hearth
Places like Hearth in New York City are looking to make cocktail kits, use Zoom for virtual tastings and more as quarantine continues.
Menu>Beverage Trends

How to make takeout and delivery cocktails work for your restaurant

It’s often said that necessity is the mother of invention, and with COVID-19’s devastation of the hospitality industry, many operators have had no other choice but to throw new ideas up against the wall in the hope of creating alternate revenue streams. And many are finding that some of those ideas are so lucrative that they may just stick well beyond the pandemic.

In addition to all the innovations around selling meals to go, home delivery, and even liquidating once-robust wine cellars, beverage directors have also been finding ingenious ways to sell pre-made, bottled cocktails, as well as unique cocktail kits that guests can play bartender with in the comfort of their own homes. They’re being met by legions of fans who want unique experiences, but also who are eager to help their beloved haunts survive.

“Don’t underestimate the amount of goodwill that exists in this climate,” said Jordan David Smith, spirits director and head bartender for The Backroom, HALL, and o.d.o in New York City. “If you’re a good operator and people like what you offer, they want to support you. More people than you might realize would rather buy the wine, or saké, or spirit that they were introduced to from the place that introduced them to it.” 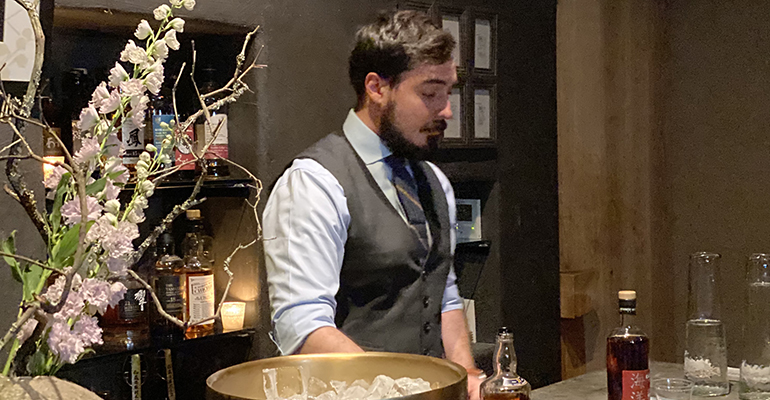 “Don’t underestimate the amount of goodwill that exists in this climate,” said Jordan David Smith, spirits director and head bartender for The Backroom, HALL, and o.d.o in New York City.

HALL is offering to-go cocktails for takeout and delivery, and are seeing most of their sales come through the delivery services they’ve partnered with. The drinks change on a weekly basis, and are sold in 16-ounce bottles, enough for four drinks, for $30.

“It’s obviously uncharted territory for us, having never had the ability to offer them before,” Smith said. Before the pandemic, New York bars couldn’t do cocktail takeout or delivery “We aren’t losing our shirts, but we’re intentionally not making a killing either. Providing to-go cocktails at fair prices is a small way of letting people support us, and a means of giving them a part of the experience of going out that they miss.” 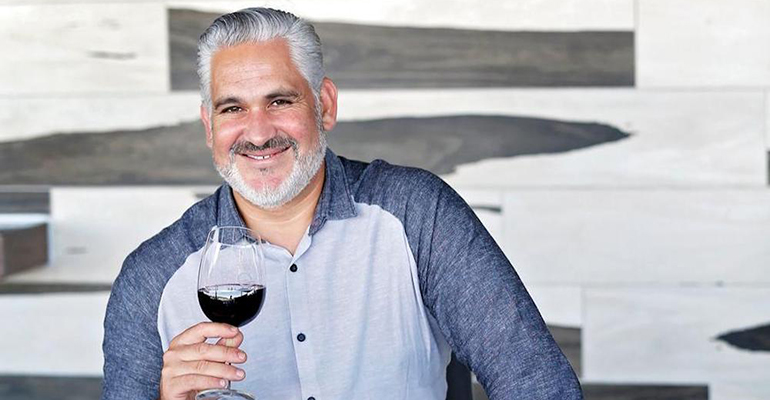 With the easing of certain regulations for California operators, beverage manager Maurice DiMarino, who oversees more than 20 operations for Cohn Restaurant Group in San Diego (three of which are currently open for takeout), is selling anything and everything in liquid form that he can. “We offer everything — beer, wine and spirits,” he said. “We are selling growlers and mason jars of beer, cocktails in mason jars, full bottles of wine and cocktail kits.”

For Mother’s Day, DiMarino and team offered kits that included bread pudding, a bouquet of flowers, and a choice between either a Mimosa kit or a Margarita/Paloma kit for $45 and $55, respectively. They sold more than 100. The Mimosa kit included a 750-milliliter bottle of sparkling wine and a pint of orange juice, while the Margarita/Paloma kit included a bottle of tequila and a bottle of mezcal, along with limes and grapefruits, agave syrup, two cocktail shakers, grapefruit soda and some recipes so guests can play around with different variations for themselves. His Old Fashioned kit comes with both bourbon and tequila to allow for fun experimentation. 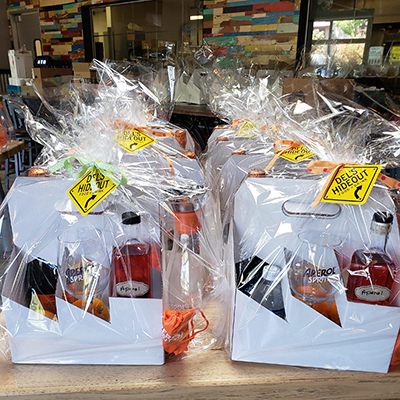 “Yesterday I had just finished packaging Aperol Spritz kits and put up a photo on Instagram,” DiMarino said, “and immediately had people texting me to order some.”

His approach has been to price everything as low as he can (somewhere around $25-$35 above cost) and just to keep engaging with his guests to stay top of mind by offering new creations and experiences such as wine and spirits tastings and classes via Zoom, which have helped to raise more money.

Many small restaurants across the country are now seeing some federal loan programs coming into play that are allowing for some principal team members to be rehired, and who can help create new revenue sources.

“We were approved for a PPP [Paycheck Protection Program] loan, which kicked in just yesterday,” said Christine Wright, general manager at Hearth restaurant in New York City. “This allowed us to hire back a few key managers and, ideally, open as just a takeout/delivery operation in the next week or so. We will need to rehire part of our staff to help with that, so hopefully it all works out — fingers crossed.” 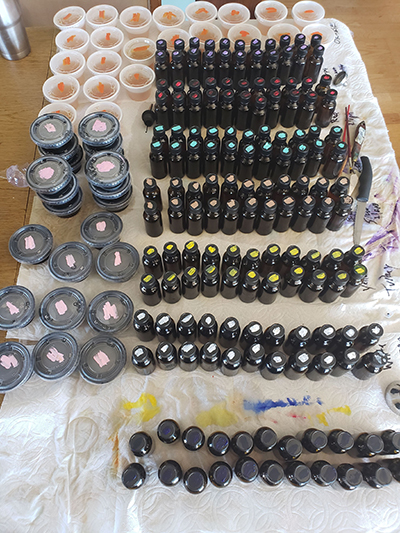 Photo: An example of the prep work involved in a Zoom experience from Cohn Hospitality Group.

Up until now, Wright has been selling mostly wine and basic cocktail kits, along with a selection of full bottles of spirits, beers and ciders, and to great success -- Hearth has sold nearly half of its robust inventory of products thanks to support from long-time regulars. But with more hands on deck, Hearth can begin to offer more custom and creative offerings that better align with what a guest might expect if they were actually dining in the restaurant.

“We’re planning to offer bottled cocktails in both small format [200-ml] and large format [one liter] sizes,” Wright said. “The smaller format will be our more creative outlet, with specialty cocktails, and the larger format will be more our riff on classics. I always wished that we were able to sell wine and spirits with our food for delivery and takeout, and now we can. It seems like you could really get close to the Hearth experience if you order a meal with an original, tasty bottled cocktail, and an awesome bottle of wine.” 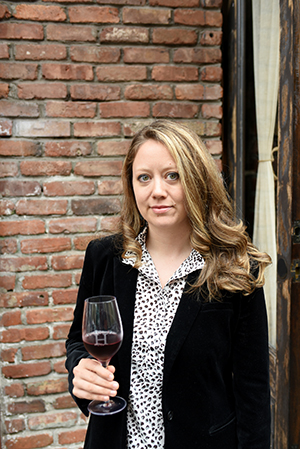 In terms of production, keeping some simple rules in mind can be helpful. “Start small, but ambitiously,” said Jordan David Smith. “Until you know the demand for your drinks, you don’t want to lock an abundance of product into a venture that might not sell as aggressively as you’d like. You can always scale up later. And by ambitiously, I mean be creative in a way that’s representative of your restaurant.”

Remember, this is a chance to brand your operation in a way that shows who you are and what your perspective is. Get creative and have some fun; your guests can make their own classic cocktails at home, so give them something unique.

Additionally, Smith suggested picking one person to go in for one full shift and complete the production for the week, from prep to packaging, as it mitigates both health risks and labor costs.

“It also forces you to put a relatively hard number on the amount of product you’ll sell,” he said, “which can in turn create its own demand when customers hear there are only X number of drinks available.”

Many of these new revenue streams may last for the foreseeable future.

“I think this will still be pretty relevant for some time after we open,” DiMarino said. “Especially if we are restricted to 25%-50% of occupancy. Hopefully the laws will continue to let us sell retail. I think this could really help restaurants regain some of those sales lost during the quarantine period.”