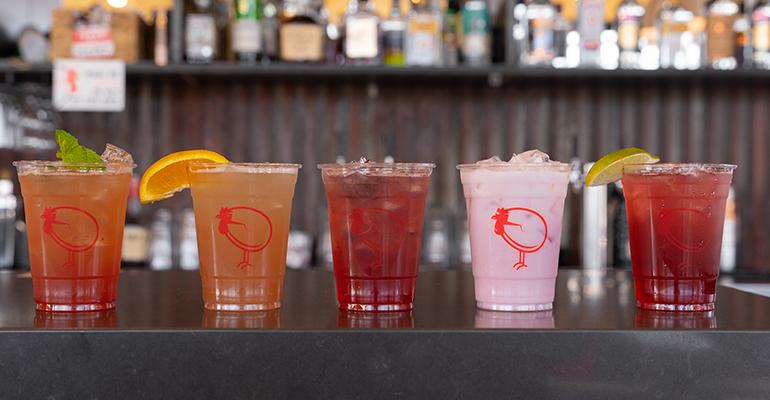 The Crack Shack came up with $7 Shack Sips such as the Mule in the Henhouse and the Dirty Bird.
Menu>Beverage Trends

By many accounts, alcohol consumption spiked at the onset of the pandemic. But now, as consumers are settling into a somewhat new way of life that includes a greater focus on health, they’re seeking beverages that are better for them, or at least free of alcohol.

“You shouldn’t feel segregated or lost in the world just because you don’t want to drink alcohol,” said Kyle Letson, bar manager at Oak at Fourteenth, a trendy and upscale restaurant in Boulder, Colo. 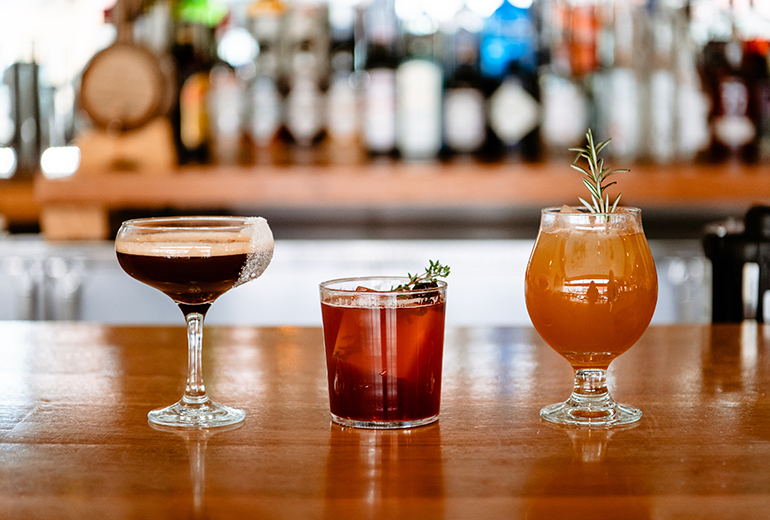 Kyle Letson at Oak at Fourteenth in Boulder, Colo., developed three mocktails using herbal elixers from local company Three Spirits: the N/Aspresso, the Lights Out, and the Peach Keen.

The N/Aspresso uses the company’s Social Elixir, which Letson describes as similar to Port — “super raisiny with lots of plum” — along with regular or decaffeinated espresso, Fee Brothers alcohol-free Chocolate Aztec Bitters and agave syrup.

The Lights Out is made with Three Spirits Livener — “a juice-forward elixir on the spicier side,” said Letson, with blackberry-thyme simple syrup, Dram Apothecary’s Palo Santo bitters and Fee Brothers Chocolate Aztec Bitters. That’s served in a rocks glass over a large ice cube, topped with a little soda, and garnished with preserved blackberry and a thyme sprig.

The Peach Keen uses Three Spirits Night Cap, which Letson said is like “a very herbal bourbon, or almost like an Amaro” with peach-rosemary syrup, lemon juice and Fee Brothers rhubarb bitters for a more floral note. That’s shaken and served over ice in a goblet and finished with a little soda water for added effervescence.

There’s a fine line between a cocktail mixer and a craft soda, according to Kristen Wemer, director for technical services at Flavorman, a custom beverage development company based in Louisville, Ky. 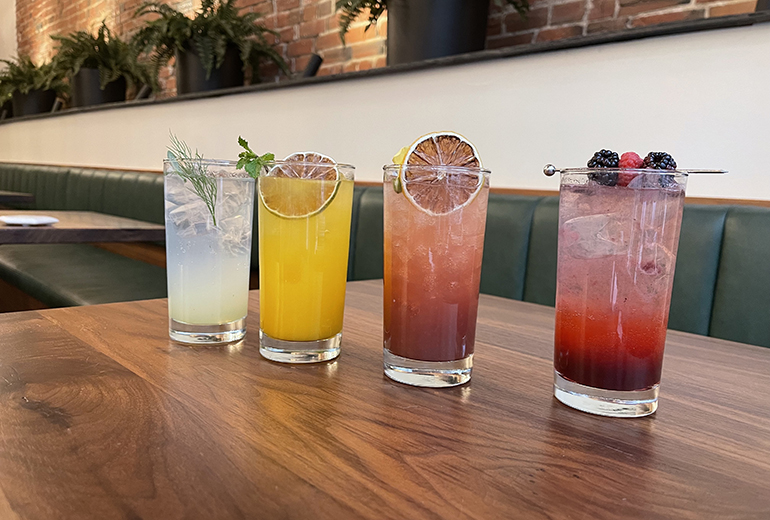 Hence the mocktails at Deviation Distilling in Denver, which specializes in gin as the company’s forthcoming whiskeys are still aging in barrels. Even at its cocktail lounge in the Dairy Block in Downtown Denver, there’s a demand for non-alcoholic beverages, and mixologist Tiago Amaral is happy to oblige with $11 zero-proof drinks such as the Berry Blast, made with blackberries, raspberries, grapefruit sherbet, simple syrup, lime juice and soda water, or the Garden Party made with cucumber, dill, sage, lemon sorbet and soda. A range of spirit-free Mojitos are also on offer.

“Our goal was to deliver a product that allows people to enjoy each other socially even if they’re not drinking alcohol … by focusing on beautiful looks, aromas and tastes,” he said.

Amaral is developing recipes for a drink with figs, one with beets and passion fruit, one with blood orange, and one with chlorophyll, which he said, apart from being a beautiful bright green, is beneficial for asthmatics.

Wemer of Flavorman said ingredients with health halos are certainly on trend when it comes to soft drinks. She added that the notion of what’s good for you “means different things to different consumers, providing a lot of room to play — lower sugar, ‘beneficial’ ingredients such as probiotics, or even ingredients known to support health in other ways such as vitamins and minerals, adaptogens and other herbs.”

“Soda” might have negative connotations in some circles, but apparently not much in Utah, where the majority of the population is Mormon and therefore not supposed to drink alcohol or caffeine.

“Soda’s really big in Utah,” said The Crack Shack’s marketing director Nicole Rogers, who noticed the popularity of the soda machines in its restaurants in the Utah communities of Salt Lake City, Riverton and Lehi. “We wanted to offer them something more on-brand for us versus just generic soda offerings.”

They came up with $7 Shack Sips such as the Mule in the Henhouse, made with strawberry, lime, grenadine, mint and ginger beer, and the Dirty Bird, made with blackberry, Sprite and vanilla cream. A “dirty soda” is any soda with something added to it — often dairy, but it could be any flavor shot.

They’re made by bartenders but served in soda cups, and guests are welcome to refill those cups for free with fountain drinks.

The Shack Sips are only available in the seven-unit chain’s Utah locations, not in its three Southern California restaurants or the one on the Las Vegas Strip. But the Pink 182, made with berries, lime, mint and pineapple topped with Sprite, was offered at all of the restaurants in October for Breast Cancer Awareness Month, and it sold well.

“We actually found that people were pretty receptive to a non-alcoholic drink, even in our Las Vegas store that is directly on the Strip, where we do great bar sales. … I think people are very interested in having a fun drink even if they’re not trying to have alcohol, especially if it’s on-brand and pairs really well with the food.”

A Utah soda chain called Swig trademarked the term “Dirty Soda,” and it sells a lot of them, according to founder Nicole Tanner.

Founded in 2010, Swig, based in Lehi, recently opened its 46th location, in the Dallas-Fort Worth area.

Swig offers both Coca-Cola and Pepsi-Cola products (which she said took some doing), along with Dr. Pepper, assorted root beers, their own energy drinks and still and sparkling waters. When Swig entered Oklahoma, it added sweet tea.

Guests can and do customize them with a choice of 35-40 flavor shots, along with purées, creams and fruit.

“They know exactly how they want their drink,” Tanner said, and Swig records the favorite drinks of its loyalty program members so it’s made exactly the same, with specified amounts of each flavoring and amount of ice, every time.

Popular syrups include coconut, vanilla, raspberry and peach, and a hit across the chain is the Strawberry Breeze, made with still or sparkling water, strawberry purée, frozen strawberries, sugar-free coconut and vanilla syrups, and coconut cream.

Larger chains have also seen success with soft drinks with different flavor profiles, such as Chick-fil-A and its Cloudberry Sunjoy that launched in the spring as a limited-time offer. It was a combination of lemonade and sweet tea (or diet versions of them), flavored with cloudberry and cherry blossom, starting at $2.29.

A spokeswoman for the Atlanta-based chain said the cloudberry combination scored best in internal testing, and after a successful test in Augusta, Ga., last autumn it was offered nationally. 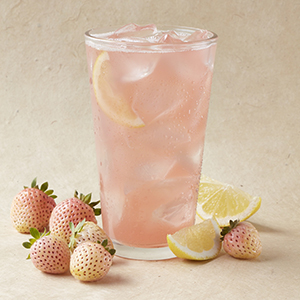 Photo: Hot Dog on a Stick introduced a pineberry lemonade in November.

“While we don’t typically share sales information, we can say that customers loved it,” she said in an email.

Other chains with trend-forward flavors in their sodas include Buffalo Wild Wings, which this past spring rolled out MTN Dew Legend flavored with blackberry, ginger and citrus, and Taco Bell, which in the spring offered the Cherry Sunrise Freeze — a frozen wild cherry flavored drink with pineapple and orange flavors — and soon after introduced Brisk Dragon Paradise Sparkling Iced Tea as a permanent addition to the menu. It’s a bright purple carbonated drink with flavors of raspberry, blackberry and dragon fruit in a hibiscus tea base.

Dragon fruit, though fairly bland in flavor, is nonetheless trending in beverages due to its attractiveness and health halo. Syrup company Monin introduced a dragon fruit syrup in 2020, along with Orange Spritz, with bitter orange and floral notes, and Pineberry, which resembles a small white strawberry with bright red seeds and tastes like a cross between strawberry and pineapple.

Hot Dog on a Stick, a subsidiary of Fat Brands, introduced a pineberry lemonade in November to its more than 50 locations, and although it was supposed to be available through December it sold out at many restaurants before then, according to director of operations Nichole Montano.

“Pineberry is like the perfect balance of flavors of a ripe strawberry and sweet pineapple,” she said. “We definitely thought it was delicious and fun, and the fourth quarter being our busiest season for us, we definitely wanted to introduce this delicious product to our customers.”