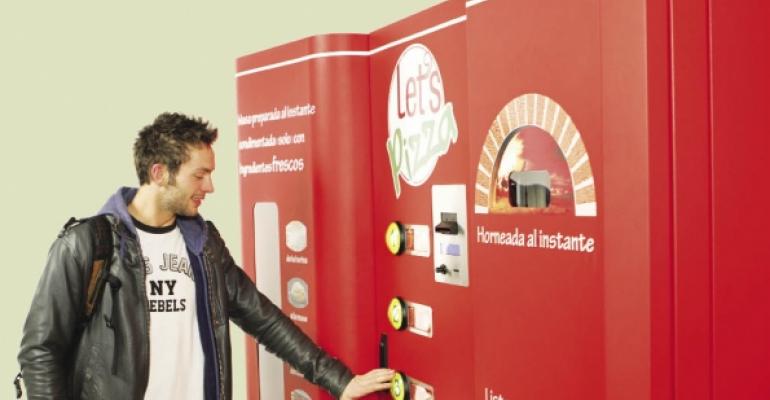 The automat is back.

No, not the turn-of-the- century version by Horn & Hardart, a once-popular chain of self-service food vending outlets where guests would drop in a nickel, lift a little door and pull out a sandwich. But an infinitely more modern version with the same self-service orientation designed to give time-starved consumers an affordable treat wherever they are, whenever they want it.

Among the players embracing the new automated model are:

l Seattle’s Best Coffee, which recently announced a partnership with Coinstar Inc. to put thousands of premium-coffee vending machines in grocery and other retail stores across the country;

l Jamba Juice, which is rapidly growing a self-service smoothie and beverage kiosk designed for schools, convenience stores and airports;

l And Sprinkles Cupcakes, which this year unveiled a “cupcake ATM” with a selection of the bakery’s specialties available 24/7.

Other concepts are considering their automated options. Among them is an Italian company that this summer is expected to bring a new pizza vending machine to the United States. The machine would make a 10-inch pizza from scratch, including mixing the dough, adding the toppings and baking — all within three minutes.

More such vending opportunities are coming as restaurant chains find the right technology and the right partners to reach their target customers, according to observers.

“Certainly in food, it’s been talked about for a long time,” said Dennis Lombardi, executive vice president of consulting firm WD Partners in Dublin, Ohio. “It’s a great way of extending the reach of your brand — once you develop the technology to offer a product that represents your brand well.”

Automated food vending has been widely used in countries such as Japan, where everything from fresh eggs and beer to hot noodles and live lobsters can be purchased from a machine.

For years, he said, he urged restaurant clients to look for automated opportunities, but the U.S. foodservice industry has been slow to adopt.

“They were worried, correctly, about the quality of the experience,” said Stibel.

But things have changed, he said.

“Yesterday, vending-machine coffee was terrible, for example. But today we drink vending- machine coffee in our homes with K-Cups. We’re comparing Keurig-made coffee to Starbucks and saying it’s just as good.”

Stibel pointed to the Seattle’s Best/Coinstar deal as the perfect vending marriage for today’s consumer. Starbucks-owned Seattle’s Best in June announced a five-year agreement with vending chain Coinstar to roll out a new automated coffee kiosk in thousands of locations.

“The market is prepped for it and the partners are right,” he said.

The machine, dubbed Rubi, grinds whole coffee beans and brews each cup to order. Specialty drinks such as mocha or vanilla lattes are also available, with prices starting at $1.

For Seattle’s Best, which has about 100 coffeehouse locations across the United States and Canada, the move was part of a larger strategy to make premium coffee available in places it couldn’t be found before, said Jenny McCabe, Seattle’s Best director of communications.

The “bean-to-cup” technology was key, she added.

“This is not your grandpa’s vending machine,” she said. “It really makes a good cup of coffee.”

Coinstar, which is known for its self-service DVD rental Redbox, as well as the namesake coin-counting machines, has the infrastructure and “grocery real estate” to grow and service thousands of Rubi locations, McCabe added.

In tests, 90 percent of consumers surveyed rated their cup of Rubi coffee as either good or very good, she said.

“People have to try it to believe it,” she said.

Seattle’s Best won’t comment on projected returns from Rubi, but McCabe said the company expects to sell about 10,000 cups of coffee per year per machine.

Both Seattle’s Best and Starbucks also have tabletop self- service coffee machines in hotels and other locations around the country; each is essentially a  single-cup machine, she said.

Rubi is a full-size vending machine with a touch-screen operation that can make multiple beverages. Guests can select the “level” of coffee intensity — from bold to mild — and various flavorings. During the holidays the plan is to make even more options available, such as a peppermint mocha latte.

“The U.S. is way behind the curve” in the automated trend, McCabe said, but Seattle’s Best aims to prove that it can be done well.

“People are buying coffee all day long in all kinds of places,” said McCabe. “We believe each of these places is an incremental coffee occasion that we don’t want to lose to another brand.”

Jamba Juice’s self-service outlet, called JambaGo, is another opportunity for the brand to be accessible to consumers, said officials.

The 750-unit smoothie chain has been testing licensed JambaGo locations in elementary and secondary schools. The units, which take up about the same space as a soda dispenser, offer pre-blended smoothies and a small cooler of Jamba Juice branded grab-and-go products.

This year parent company Jamba Inc., based in Emeryville, Calif., expects to install 400 to 500 JambaGos in schools, convenience stores, colleges, entertainment centers and other nontraditional locations.

The company projects revenue from the licensed locations to be about $700,000 for fiscal 2012, but James White, Jamba’s chief executive, sees potential for much more growth. Over time, he envisions installing more than 1,000 outlets.

“It holds great promise,” White told analysts during the company’s most recent earnings call. “We’ve seen significant momentum building in schools in terms of the demand for these units, and we’re learning as we go, but we’ve been very pleased with the early results.”

Stibel, whose company works with Jamba, said the quality of JambaGo products is good.

“It’s not the same as you’d see in Jamba Juice stores,” he said. “But the consumer doesn’t expect it to be identical. They do expect quality, however, and JambaGo delivers.”

Freshness is a factor for vending situations, admitted Stibel, but “I don’t think people expect something coming out of a machine to be as fresh,” he said. “Consumers get it. They’ll be willing to tolerate it if the experience is something they’re willing to repeat.”

The ability to assure quality was key in the move by Sprinkles Cupcakes to launch a “cupcake ATM” connected to its bakery in Beverly Hills, Calif., in March, said owner Charles Nelson.

The idea grew from customer demand, he said. Sprinkles stores are typically open from 9 a.m. to 9 p.m., but customers asked them to stay open later.

It didn’t make sense to staff the bakeries during late-night hours, so developing an automated outlet filled that need.

Using a touch screen, guests can select from a variety of flavors stocked throughout the day.

The machine takes credit cards only, and customers can watch on the screen as the robot-arm camera shows their cupcake being selected and placed into in a signature individual cupcake box.

Because bakers are producing cupcakes almost around the clock, the machine is filled with fresh batches throughout the day up until about midnight, and again the next day starting around 3 a.m.

In Beverly Hills, the ATM sells about 1,000 cupcakes per day at about $4 each, and it’s common to see lines into the wee hours of the morning.

The company also is looking to place cupcake ATMs in nonbakery locations, though details are still being worked out. Nelson said they would look for high-traffic areas where the ATMs can be stocked with fresh product.

Stibel said he thinks customers will find the cupcake ATM a good experience, so long as it’s attached to a bakery.

“I think it’ll be successful with a store-adjacent location, but I’m not sure it has legs” outside a home base, he said. “What happens when the novelty wears off?”

The next big thing?

Novelty may also be a factor for the new Let’s Pizza automated pizza machine, which is being brought to the U.S. by Miami-based vending company Smart4Retail.

Let’s Pizza makes 10-inch thin-crust pizzas from scratch, mixing the dough, rolling it into the pan, depositing sauce and selected toppings, and baking it in three minutes.

The cost to operators is about $2 per pizza made, so if pizzas are priced around a recommended $6 to $7.75, potential margins are high, said vice president of operations Victor Mancebo. Each machine can hold ingredients for about 100 pizzas.

Sight unseen, Stibel said he was skeptical of vending opportunities like Let’s Pizza.

“I really am concerned about the quality and consistency of that product,” he said. “That will be an uphill battle.”

Mancebo agreed that American consumers are not quite ready for a foodservice vending landscape that rivals that of Asia.

However, he predicted: “This is the next big thing.” n