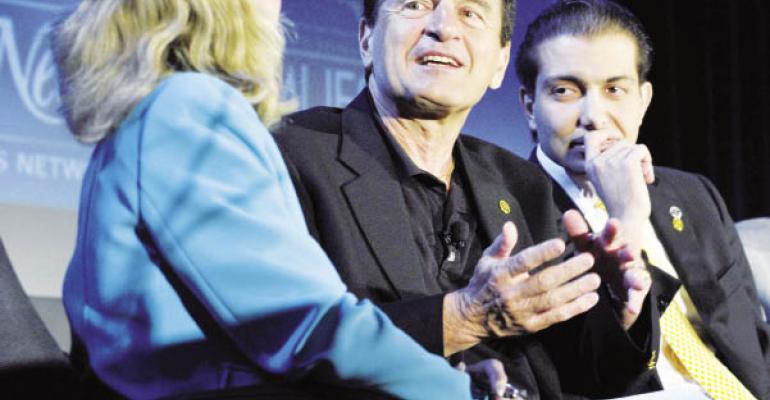 Participants in the Award Winning CEO Panel at the 2010 MUFSO conference came out in favor of the national menu-labeling law, but exhorted attendees to continue to advocate for an interpretation of health care reform that would benefit the foodservice industry.

Sally Smith, chief executive of Buffalo Wild Wings and the MUFSO Operator of the Year, said that there were still areas of the legislation that required further clarification, and she said it was important to let politicians know how it would affect restaurant businesses.

But as for requirements in the legislation mandating that menus include calorie information, Smith said she was glad that one law would be in place rather than a patchwork of rules in different jurisdictions.

John Y. Brown, former chief executive of Kentucky Fried Chicken and the 2010 Pioneer of the Year recipient, said of caloric information: “It’s the truth. It’s probably the right thing to do.”

“We have to own it,” said Doug Brooks, chief executive of Brinker International, “and realize that most people lie through their teeth about what they eat.” He said, however, that attempts to offer lower-calorie items didn’t work and that customers at Chili’s and Maggiano’s say they eat more healthfully at home, but when they eat out, they want to celebrate.

Brooks was the winner of the inaugural Norman Award, given in honor of the late Norman Brinker, founder of Brinker International and the mentor of a legion of restaurant executives.

The other chief executives on the panel, moderated by Nation’s Restaurant News publisher Randall Friedman and executive editor Robin Lee Allen, were winners of the NRN Golden Chain Award. They were Elie Maalouf of HMSHost, Fred DeLuca of Subway, Sardar Biglari of Steak n Shake and Kevin Reddy of Noodles & Company.

NRN’s readers cast their votes from among the award winners to select the Operator of the Year.

The panelists discussed their personal histories and observations about the current economic climate, as well as their opinions about menu labeling and health care reform.

Biglari, who got into the restaurant business as an activist investor who took over the reins of Steak n Shake and Western Sizzlin’, said he got his start working in his family’s rug business before working for a pizza place in Canada at age 13. He started his first company as a teenager, and selling it before going to college provided him with the seed money for his first hedge vehicle.

On the subject of menu labeling, he said: “I personally don’t think people will change their ways. They might change for a few weeks, but they’re going to eat what they like, and why shouldn’t they? I mean, if you’re going to try to trim a few calories to live a little longer, that’s a miserable way to live your life.”

Commenting on the economy, Maalouf pointed out that he is the head of a 113-year-old company, and that has given him the long-term perspective that you can’t change your strategy for every recession. He added that whatever cost-cutting measures are taken must be done across the board and all at once, “so there’s no dribbling out of strategies.”

DeLuca said that Subway had been lucky during this recession in that the hugely successful $5 Footlong promotion had been carrying them through the difficult times.

He added that he found it interesting that franchisees were wondering about an exit strategy from the cost-cutting promotion.

“I thought you wanted to exit things that didn’t work,” he said.

Reddy said that Noodles & Company also was fortunate to have gone into the recession during a company growth spurt.

“We didn’t want to lose that momentum,” he said. “I think we’ve been a little sharper in discipline about how we do things,” he added, noting that they did slow growth to preserve capital and “got better at real estate.”

He said the company was now working on “finding efficiencies” in its profit-and-loss statement.

“But if you only play defense with cash flow, you’re not going to come out strong.”