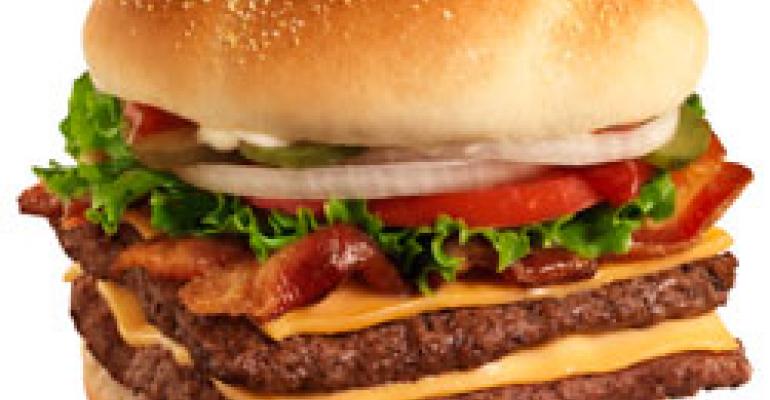 DUBLIN Ohio Wendy’s is breaking its biggest ad campaign in years on Friday with a focus on product quality and a new bacon cheeseburger meant to take on competitors’ premium burgers.

The Dublin-based chain, a division of Atlanta-based Wendy’s/Arby’s Group, will unveil the new “You Know When It’s Real” campaign with a 60-second commercial premiering during ESPN’s “Football Friday” lineup of programming, including “Sportscenter,” a weekly college-football match-up and “NFL Live.” Commercials for the Bacon Deluxe, Wendy’s new premium burger featuring a new bun and applewood-smoked bacon, will debut Oct. 12.

Wendy’s hopes to emphasize fresh ingredients and in-store preparation with the ads, which mark the first campaign with the brand’s new agency of record, New York-based Kaplan Thaler Group. But the brand also must balance a quality message with one of value, not just in terms of price but also premium items for the money, said Ken Calwell, chief marketing officer for Wendy’s.

“We really want to have something for folks who care most about what they get and for the folks that are more price-point-focused,” Calwell said. “If you’re tilted too much to one group or the other, that’s where you get into trouble.”

Wendy’s plans to pay attention to both kinds of value seeker by rolling out new menu items and advertisements for its 99-cent value menu later this year, coupled with the launch of the Bacon Deluxe, Calwell added.

The brand’s debut of the ad campaign and premium burger is the fourth step in a long turnaround plan begun in September 2008, when Wendy’s International Inc. and Arby’s parent, Triarc Cos. Inc., merged to form Wendy’s/Arby’s Group. Previous turnaround efforts were identifying a brand vision, improving product quality and conducting an agency review that led to Kaplan Thaler getting Wendy’s account, Calwell said.

Throughout that whole process, Calwell added, Wendy’s interviewed more than 10,000 of its customers about their experiences with the brand, and what people mentioned most were quality and freshness markers: the chain’s use of fresh, never-frozen beef or the fact that baked potatoes were cooked in ovens, not microwaves, for instance.

“When we brought up Wendy’s [with consumers], there were lots of positives,” Calwell said. “We asked, ‘What’s the central guiding truth?’ We learned that this notion of being real was really important to them, and É consumers saw Wendy’s as being able to deliver real.”

To drive that point home, Wendy’s advertising for the Bacon Deluxe will highlight the chain’s new variety of bacon, which is center-cut and thicker, naturally applewood-smoked, and cooked on-site in ovens. The more premium bacon also will be included on bacon products like the Baconator.

“It feels like in the quick-service category, there’s kind of a sea of sameness out there,” Calwell said. “Our competitors use a precooked bacon that they largely reheat in microwaves. But go to Wendy’s, and you’re going to smell bacon in the stores, and that’s a good thing. It shouldn’t ding in a microwave; it should sizzle in an oven.”

New commercials will be food-focused and understated, like the chain’s founder, Dave Thomas, Calwell said.

“This campaign is not about synthesizers and smoke and mirrors, and we talk in a straightforward voice,” he said. “Dave was a plainspoken, straight-talking man, and we’re that way as a brand.”

Since Thomas’ death in 2002, Wendy’s has struggled to find a coherent brand voice in its advertising, and the chain has tried five different campaigns the past several years. After an agency review, Wendy’s awarded Kaplan Thaler its account in late July. As it goes forward, Wendy’s hasn’t ruled out harkening back to Thomas’ legacy in future quality-focused ads.

“It’s certainly an option to work with Dave,” Calwell said. “We’re proud of what he created, and his legacy lives on in the way we do things here. The fresh beef we use costs more, and it’s more difficult to do in the stores, but it’s the right thing to do and Dave instilled that in us.

“Dave was a real guy, and he created real food for real people. So it’s consistent with our new message and always an option.”

The Wall Street Journal reported Thursday that Wendy’s will spend $75 million dollars on the new marketing initiative in the fourth quarter.

Separately, Wendy's/Arby's Group said earlier this week that it had hired Andy Skehan to serve as senior vice president of its international division as the company looks to ramp up growth outside of North America. Skehan most recently worked for Quiznos, where he was president of the sandwich chain's Europe, Africa and Middle East division.