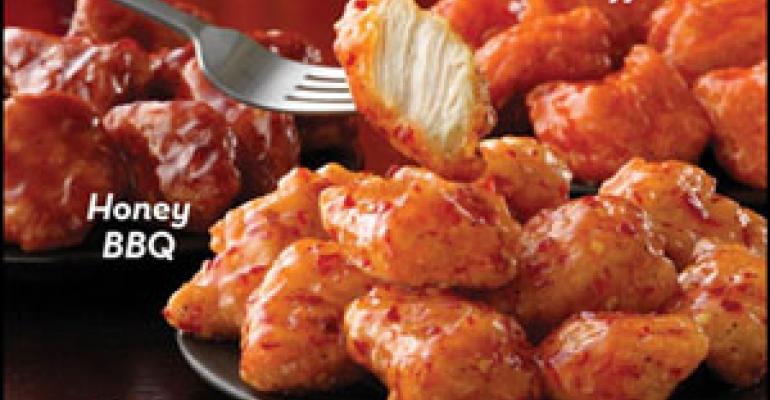 Wendy’s to roll out boneless wings

DUBLIN Ohio Wendy’s said Tuesday it would introduce boneless chicken wings in a trio of flavors later this month.

The announcement comes less than two weeks after the No. 3 burger chain hinted that it would soon have major new-product news and as peers throughout the quick-service segment ramp up their menu introductions in an effort to keep customers coming in their doors. In the recent past, KFC has debuted grilled chicken, Burger King has touted its ribs and McDonald’s has rolled out its premium coffee offerings.

Wendy’s Boneless Wings, the first boneless wings to be offered by a QSR hamburger player, will come in three flavors: Sweet & Spicy Asian, Honey BBQ and Bold Buffalo. The suggested price of the item will be $3.99 for seven to nine wings, depending on weight. Boneless wings also will be available in a combo meal for a suggested $5.69.

The wings, made with 100-percent breast meat, will be lightly breaded and hand-tossed in one of three sauces, Wendy’s said in a statement. The 6,623-unit chain will begin promoting the Sweet & Spicy Asian choice in national advertising scheduled to launch June 22. The other flavor options will be promoted later in the year, said Wendy’s spokesman Bob Bertini.

“Our new Boneless Wings are as far as it gets from fast food,” said Ken Calwell, Wendy’s chief marketing officer. “Sweet & Spicy Asian wings are something you’d find at an upscale restaurant, and now you can get them at Wendy’s.”

Wendy’s introduction of boneless wings follows the rollout last month of its Frosty-cino Shake and the Coffee Toffee Twisted Frosty. As part of the chain’s turnaround strategy that began just after its merger with Arby’s and the formation of Wendy’s/Arby’s Group, Dublin-based Wendy’s overhauled its R&D process and put a record number of products into testing, Calwell said.

According to Bertini, the boneless wings were tested in four U.S. cities in January. He noted that other boneless wings options could be introduced in the future.

During a conference call in early May, Wendy’s/Arby’s president and chief executive Roland Smith told investors the boneless-wings product was one of many premium chicken products in the pipeline.

“At Wendy’s, we are just beginning to re-establish leadership in new-product innovation,” Smith said.

However, Wendy’s has not fared as well as many of its QSR competitors in the economic downturn. Wendy's/Arby's Group reported a loss of $10.9 million, or 2 cents a share, for the first quarter ended March 29. The results included $15 million in one-time charges related to last year's merger of Wendy's International Inc. and Triarc Cos. into Wendy's/Arby's Group. First-quarter revenue totaled $864 million, the company said.