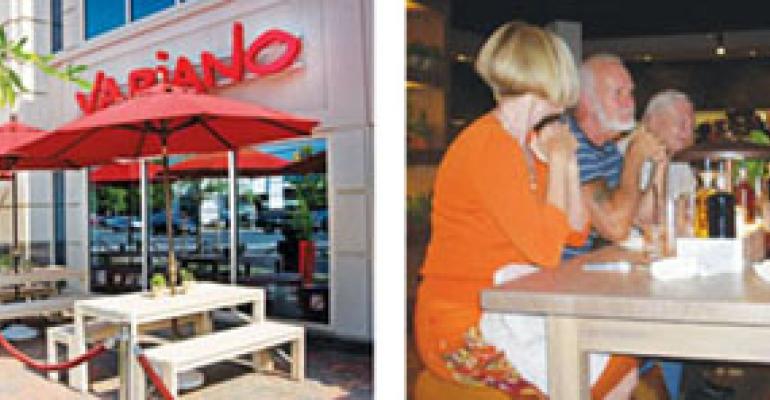 Mitchell Dannenberg knows how to savor a lunch at the new Vapiano restaurant in Fort Myers, Fla. Order the fresh pasta crafted from a machine behind the station counter? Check. Chat with the cook while he prepares the dish? Check. Hang out for two and a half hours in the stylish restaurant with leather-covered chairs at heavy-oak tables. Check.

“I enjoyed watching the food prepared,” says Dannenberg, an insurance broker who considers himself a foodie. “It was like I had my own personal chef. I like the ambience. I can relax and enjoy the conversation. I had a two-and-a-half-hour lunch, and nobody said get out.”

Vapiano International LLC is banking on patrons like Dannenberg—customers with an appetite for fresh pasta and pizza, an appreciation for an upscale and friendly ambience where laptops are discouraged, and a wallet willing to shell out $8 to $11 per entrée.

Vapiano’s upscale fast-casual concept has stirred a buzz in the restaurant industry. Four Germans have created an Italian restaurant chain that offers an intriguing blend of friendly chefs who chat with customers while preparing the food in a hip atmosphere that’s designed to get patrons to engage with each other at tables that seat six to 12.

Customers are greeted with a “chip card,” or smart card, which they take to pasta, pizza or salad stations to keep track of their meal’s costs. They check in with the cooks, who make the food for no more than two people at a time. Pasta and pizza dough machines imported from Italy at $8,000 to $10,000 apiece sit behind the station counter.

Want extra oregano, or a little garlic? No problem. Just chat with the cooks, who will tailor your meal to the smallest detail.

“We want cooks with great personalities,” says Martin Luible, Vapiano’s chief operating officer. “We can train them in cooking. We call them ‘cook-tainers.’ They’re kind of like entertainers.”

The cooks and customers are separated by only a couple of feet, which is supposed to lead to a meal that’s piping hot, says Kent Hahne, Vapiano’s chief executive and founder.

The restaurant’s interior is designed with an upscale touch. Chairs are covered in leather. The tables are made of hard oak. The pasta bowls are high-end china from Europe. The containers on the table filled with various oils, salt and pepper are made of marble.

After chatting with their cooks, patrons are encouraged to shoot the breeze with their dining neighbors. Want to play with your electronic gadgets at the table? Highly discouraged.

Hudson Riehle, an official with the National Restaurant Association, says Vapiano is hitting the high notes: quick service in a casual atmosphere that’s kicked up a notch in locations frequented by higher-income consumers.

Indeed, Vapiano is seeking a higher-income professional demographic in the 20-to-55-year-old age group, Hahne says. Also, 60 percent to 65 percent of its customers are women, he says.

The number of patrons is growing. Launched in Hamburg, Germany, in October 2002, Vapiano has grown to 35 restaurants in a dozen countries. By the end of 2008, Va-piano hopes to have 60 eateries in 18 countries, including new sites in Saudi Arabia, Serbia, Romania, Croatia and Dubai.

Vapiano also has a sweeping expansion plan for the United States, where company executives hope to open 80 to 100 new restaurants in the next three to four years.

Vapiano projects that half of the new restaurants will be owned by franchisees, while the other half will be corporate-owned.

But opening a Vapiano restaurant won’t come cheap. First, there’s a $45,000 franchise fee. Then, potential franchisees have to fork over $1 million to $1.7 million for build-out, training and broker’s fees. The restaurant size is 4,500 to 6,000 square feet.

Revenue at the restaurants comes from the 350 to 800 daily customers who visit a Vapiano, where the average check runs from $15 to $20, producing annual revenues in the $1.8 million to $2.6 million range. A pizza or pasta dish, depending on whether it’s traditional, classic or premium, runs $8 to $11. There’s also a dessert and beverage bar.

Luible says Vapiano will finance its expansions of corporate eateries in the United States by borrowing against the equity of the company’s four owners, including chief executive Hahne, who was the first McDonald’s franchisee in Germany and opened 14 quick-service restaurants in the former East Germany.

Rader, who founded L’Osteria, a pizza and pasta fast-casual concept with four locations; and Friedemann Findeis.

The first American Vapiano opened in Virginia in April 2007 and two others followed in Washington, D.C. A Vapiano in Fort Myers, Fla., opened in July, while others are planned for Tampa, Fla., Miami, Dallas, Los Angeles, Chicago, Boston and Las Vegas by the end of 2009.

Julie Petsos, a south Fort Myers resident who visited the Vapiano in Fort Myers recently, says American patrons are in for a pleasant surprise.

“Conceptually, this is much different from what Americans are used to,” Petsos says.

Dannenberg says the food was terrific with a restaurant experience to match.

Luible, the chief operating officer, says the customer is in total control.

“The customer controls what goes on at the station,” Luible says. “Nobody wants to wait for a bill. There are no tips. The atmosphere is like making a party at your house. It’s like cooking at your best friend’s house.”