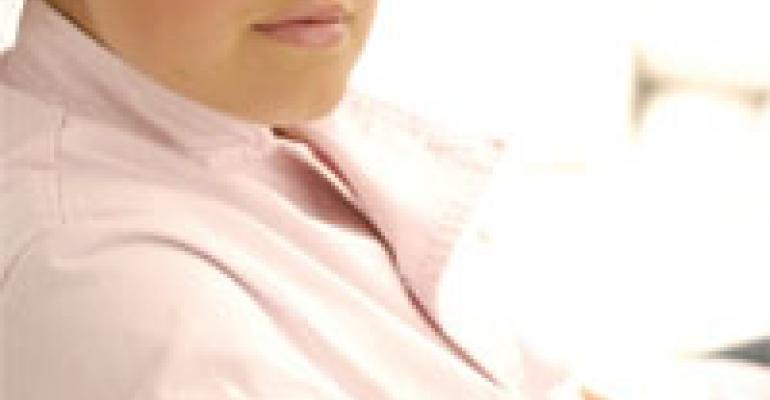 Under the Toque: Jamie Lauren is top dog at San Francisco’s Absinthe

Like many chefs, Jamie Lauren, whom The San Francisco Chronicle named a “Rising Star Chef” in 2005, fell into her profession by accident. She started as a restaurant cashier in college, “but it didn’t work out because I just didn’t really deal with people so well,” she says.

Working in the back-of-the-house as a prep cook at that restaurant proved to be more her style. Soon she was promoted to line cook and then decided to leave the University of Massachusetts in Amherst, Mass., and headed to Hyde Park, N.Y., to study cooking at The Culinary Institute of America.

She gained critical acclaim as executive chef of Levende Lounge in San Francisco, and last June she started running the kitchen of Absinthe, where she is one of several high-profile female chefs in the area—along with Judy Rodgers of Zuni Café, Traci Des Jardins of Jardinière and Elizabeth Falkner of Citizen Cake and Citizen Cupcake.

What were some of your early restaurant experiences?

I did my externship in Santa Fe, N.M., which was really cool. It’s a great food town, and it’s really artsy and food-friendly. I was at a restaurant that I didn’t really love. I was actually sexually harassed there, which was one of my first times dealing with that. But I was glad that that happened because it helped me see the warning signs of that sort of thing. Because it does happen a lot in this industry, which sucks. But it hasn’t happened to me since, which is good.

How did that help you?

It taught me how to behave in a kitchen more. I mean, it’s not like I was flirtatious or anything like that, but I learned that this was a real thing that could happen. I’ve seen it since then happen to other people, and I take it very seriously. I won’t tolerate it in my kitchen at all.

Do you have recommendations for how to shut down sexual harassment?

Not really, it’s hard. The best thing is just to try to be as professional as possible, which in a way kind of sucks, because you want to have fun, but you have to be able to stand your ground and be as strong as you can. But I think flirting in the kitchen is a big no-no. Bad idea. I think you send the wrong signals to certain people.

What do you like about working in San Francisco?

Tell me about your tattoos.

I’d wanted [tattoo] sleeves for a really long time, and when I had the idea to get them I wanted something with lots of color. So when I went in for the first one I said to the artist: “I want color, and I want orchids, and I kind of want a lotus flower, but I don’t really know,” and he came up with the whole concept.

And then once he did [the left] arm I decided that I wanted to get the other arm done. I got inspired at the Monterey Bay Aquarium. They had this amazing jellyfish exhibit. It was in a dark room, and the jellyfish were lit from behind with these orange lights, so they’re just floating in this blue pool in a dark room and they’re bright orange, and I thought, “that’s what I need to have tattooed on my body.” But my next tattoo is going to be a hot dog.

I don’t know if I should tell you where [laughs] but I want to get one of those dancing hot dogs. You know, like the ones from the drive-in movie theaters that do flips and have little faces on them. I want one of those. I’m totally obsessed with hot dogs. I’m actually going to make them here on our café menu. I’m going to do pigs in a blanket. I’m thinking of making a spicy duck sausage and then wrapping it in croissant. Then we’re going to do homemade sauerkraut and homemade relish with it.

Why are you obsessed with hot dogs?

I think it’s from growing up in New York and eating them my whole life. I have this crazy obsession with Papaya King. I grew up four blocks away from it, and I’ve been eating hot dogs since I was a little girl, and I just became obsessed with them.

And there are no good hot dogs here, and it’s really sad.

Absinthe has been around for nearly 10 years, and it has a lot of regulars. So how do you tweak the menu without scaring off the regulars?

I think some of the regulars have been scared off. A lot of the regulars who have been coming here for ten years are the older opera crowd people, and they definitely have their specific tastes of what they’re looking for. They’re the kind of people who like grilled fish over mashed potatoes with sautéed spinach.

And there was a coq au vin on the menu here for years and years and years, and it was one of the first things I took off, because I didn’t think it was that good.

To help preserve the moisture in pork confit, sear the meat after curing in salt and seasonings but before simmering it in duck fact.

But people still ask for it, so I came up with this other chicken dish that is a deconstructed coq au vin, in a way.

It’s an airline chicken breast that I cook skin-side-down so it gets really nice and crispy, and then it’s a ragoût of [seasonal] beans cooked with red wine and tomatoes and pancetta and the little pearl onions. So it’s sort of the same flavor profile as a coq au vin, but just a little bit more modern. And it’s served with sautéed escarole. People love it, so now that it’s on, I’m probably not going to change it.

But the onion soup has been on the menu forever, and I just made it better, I felt. Instead of using chicken or beef stock with it, we now use a veal reduction so it’s a little bit more rich, and I added wine instead of brandy—little things that made it a little better.

But you scared off some customers?

There was a couple that used to come in and sit at the same table and have duck confit and sautéed spinach. So when I took the duck confit off the menu, they stopped coming in. Everyone applauded me for it because I guess they were total pains in the ass.

But now I have duck confit back on the menu, and I’m kind of interested to see if they’ll come back.

But they still can’t get sautéed spinach. That’s not going to happen.

It’s an appetizer. It’s the confit leg served with agrodolce cipollini onions that we make here, and then a salad of mixed chicories with a Dijon vinaigrette.

Hell yeah it is. Sautéed spinach is boring. I refuse to serve it. I won’t. There are so many other interesting greens out there. I mean, I like spinach when it’s kind of toothsome, that has texture, but at the same time I’d rather use kale.