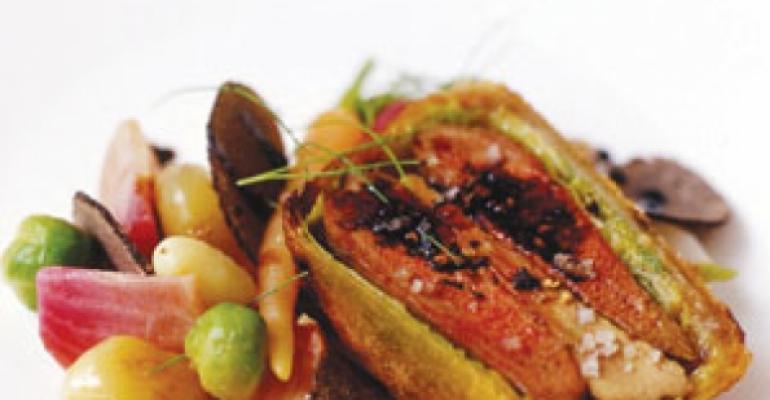 Andrea Froncillo, chef-partner of The Franciscan Crab Restaurant at Fisherman’s Wharf in San Francisco, recalls a recent phone conversation he overheard at the restaurant in which a customer spoke effusively in Italian. While others may not have understood the caller, Froncillo, who is from Southern Italy, heard the man describe his entire meal. Then, excitedly, came the punch line: “I gave them $100, and they gave me change!”

While economic belt-tightening has dampened many American consumers’ spending, a favorable exchange rate against the weak dollar has allowed international visitors at U.S. restaurants the opportunity to enjoy luxuries at relatively cheap prices.

Froncillo estimates that international traffic to The Franciscan Crab is up 30 percent to 45 percent over a year or two ago, with large numbers of visitors from Europe, South America and Asia. The best seller among both international and U.S. guests is the restaurant’s signature roasted Dungeness crab—about two and a half pounds—served with a “killer secret sauce” made with crab guts and Szechuan peppercorns.

At The Modern, a restaurant at the Museum of Modern Art in New York, chef Gabriel Kreuther says he has noticed a gradual increase in international visitors in the last two years, primarily from Germany, France, Spain and England. Kreuther says that his menu, which includes an $88 prix-fixe option, seems like a bargain to visitors from Europe, where, he says, it’s common for nice restaurants to sell appetizers for 45 to 50 euros, or about $58 to $64, and main courses for 60 euros to 70 euros, or about $77 to $90. To underscore the bargains affected by the exchange rate, The Modern this year began listing wine prices in euros as well as dollars. The strategy has been successful in boosting sales of higher-end wines.

The Modern’s international guests also frequently order an appetizer of cauliflower panacotta, finished with Yellowstone River caviar. The dish comes with cockles and orange vinaigrette and is accompanied by a rice crisp blackened with squid ink. Kreuther says the dish, a choice on his prix-fixe menu at no added cost, is appreciated by Europeans used to paying 55 euros extra for anything with caviar.

Squab, escargots and foie gras also are popular among European customers, Kreuther says. A best-selling entrée among his international clientele is squab with foie gras and caramelized ginger jus. To make the dish, the chef puts a slice of sautéed foie gras between two squab breasts and wraps it first in cabbage, then in layers of brique dough. After roasting for about 15 minutes, until it’s “very crispy, almost like a spring roll,” it’s split in two and surrounded by vegetables.

On one recent night, the sell-out special was striped bass pan-roasted with a garnish of confited tomatoes and squash. Keating served the fish on a bed of fresh spinach with meunière sauce, alongside tiny tomatoes, capers, and niçoise olives.

Wild Alaskan Salmon Tostada, which gives Southwest style to a Northwest ingredient, has proven to be a favorite among international visitors to El Tovar Lodge in Grand Canyon National Park in Arizona. For the dish, sliced salmon is layered with fried tortilla and set on a bed of organic greens dressed with tequila vinaigrette. Roasted pistachio garden rice and corn salsa are served on the side.

David Beckerleg, director of food and beverage for Xanterra South Rim, which runs El Tovar, says: “I would call the Grand Canyon South Rim recession-resistant, depending on where the dollar is. This year, I think our percentage of overseas guests has gotten bigger than other years. I think they are spending a little bit more money, and staying a little bit longer.”

While Beckerleg says that Europeans order fish more often in general than U.S. customers, a top seller among both at El Tovar is New York strip steak with cornmeal onion rings and pepper jack potatoes.

Seeber finds that international guests are often willing to leave the specifics of what each course will entail completely up to the chef, in a sort of bring-us-your-best spirit.

Caroline Styne, owner and wine director of A.O.C. in Los Angeles, says that over the summer, the restaurant suddenly saw a big surge of international guests, just as things were slowing down with local business. She says she doesn’t see much difference in food ordering preferences between European and U.S. customers. Out of towners in general, she says, often inquire about and order signature dishes such as A.O.C.’s arroz negro, a risotto-like dish made in the wood-burning oven with squid ink, squid and aïoli. Europeans may be slightly more inclined to order the restaurant’s house-made charcuterie items. A bigger difference she sees is that European customers are more likely than U.S. guests to order wine by the bottle, and are more likely to order both a bottle of white and a bottle of red, whether they are in a party of two or four.

At Hemingway’s Restaurant in Killington, Vt., co-owner Linda Fondulas reports that the restaurant has been seeing more guests from Great Britain, Ireland and Canada. A recent popular offering consisted of seared halibut and grilled shrimp served with sweet corn and butter sauce flavored with chive and just a hint of vanilla. Fondulas says the international guests are also more likely to order the restaurant’s four-course vegetarian tasting menu. Selections might include risotto with some of the plentiful local wild mushrooms, handmade tortellini with wild mushrooms in broth, vegetable couscous timbale, or sautéed baby vegetables with sage.

Bernard Ibarra, executive chef at The Mirage Hotel and Casino in Las Vegas, says guests love ganache-filled cake made with bittersweet chocolate and a hazelnut crust. It’s served with gold leaf and a tuile flavored with cumin. Ibarra says that Europeans especially like exotic tropical flavors such as mango and coconut.