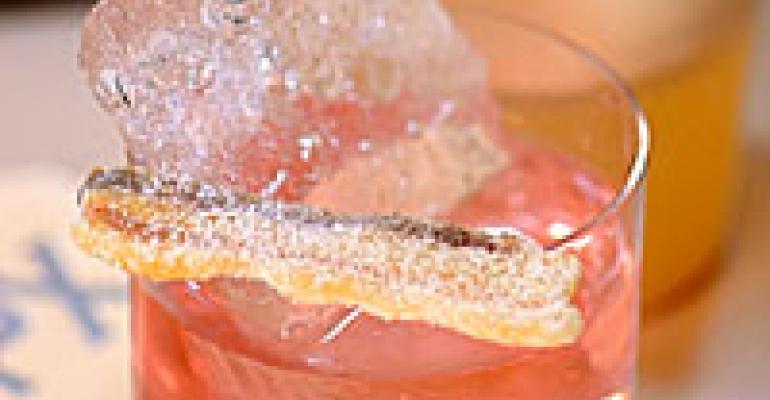 Out to squeeze every drop of salability from summer’s most eagerly anticipated crop, restaurateurs across the country are creating limited-time signature cocktails based on the incomparable flavor of vine-ripened, locally grown tomatoes.

Although operators in warm Southern and Western climes have been happily blending and muddling the juicy orbs for some time, many in swaths of the Midwest and Northeast are awaiting a harvest delayed by below-normal temperatures.

“We’re in full-bore tomato season now,” reported Todd Thrasher, general manager and sommelier of Restaurant Eve and the Px Social Club in Alexandria, Va., and author of tomato drinks like the BLT and Tomato Water Bloody Mary. “At the market, every farm has bushels and bushels of them.”

Also well supplied is Brix, a wine-country restaurant in Napa, Calif. Its summer specialty is the Golden Tomato Bloody Mary, which gets its eye-catching hue from the yellow tomatoes executive chef Anne Gingrass-Paik picks in the restaurant’s 16-acre garden. “Tomato season lasts into October here,” she said.

But in the heartland, John des Rosiers, chef-owner of the new Inovasi restaurant in Lake Bluff, Ill., is still itching to mix an all-fresh Bloody Mary with local organic heirloom tomatoes.

“We’re about a month behind with tomatoes because it’s been so damn cold,” said des Rosiers. “The consolation is that it’s worth waiting for.”

Supply issues aside, what today’s trendy tomato drinks have in common are fresh and often unusual ingredients. That includes not only tomatoes, but also flavorings as various as muddled cucumbers, fresh watermelon juice, kitchen-simmered veal stock, basil-infused olive oil and even bacon vodka made in house.

The latter, in fact, co-stars with custom-made tomato water in the BLT cocktail at Px. Thrasher “fat washes” the vodka by chilling it with cooked bacon and its grease in a container in the walk-in. The congealed fat is easy to remove, leaving a spirit perfumed with smoky-bacon essence. To that he adds the liquid that drips overnight from chopped heirloom tomatoes, lemon grass, Serrano chilies and Bermuda onions strained through cheesecloth into a stockpot. He serves it over lettuce ice cubes made from frozen iceberg lettuce juice and garnishes it with a crispy bacon strip. It’s priced at $12.

“The bacon vodka has the smokiness you associate with the grill at this time of year, and with the great tomatoes, it’s really a summer cocktail,” Thrasher said.

At Gotham Bar and Grill in New York City, beverage director Rick Pitcher said he was waiting for Pennsylvania organic heirloom tomatoes to kick off the third summer run of the Greenmarket Cocktail. The drink, named for the farmers’ market a stone’s throw away in Union Square, plays on the affinity between tomato and watermelon. It is made from equal parts of tomato water made in the Gotham kitchen and freshly made watermelon juice, shaken with muddled cucumber, mint and plata tequila.

“The inspiration was a great tomato-watermelon salad I enjoyed,” said Pitcher.

At the luxury steakhouse Barclay Prime in Philadelphia, one of the 19 Starr Restaurants concepts based there, muddling enhances the flavor of heirloom tomatoes in the Sweet Mary Muddled Heirloom Martini. Simply muddle a hunk of juicy tomato in a mixing glass, add a shot of vodka, shake, strain and serve in a martini glass with skewered tomatoes and a few drops of basil-infused olive oil.

“This drink reflects everything we do, because we’re very farm-to-table here,” said Gordon Dinerman, general manager of Barclay Prime.

The first Tomato Festival at Patina Restaurant Group, operators of 43 casual and upscale restaurants, such as Patina in Los Angeles and the Sea Grill in New York City, is showcasing savory dishes and cocktails made with tomatoes from local farmers on both coasts this summer.

One of the features is the Tomojito, made by muddling cherry tomatoes with basil leaves and stirring in tomato vodka, basil-infused simple syrup and a splash of soda.

At Inovasi, des Rosiers is planning to serve an all-fresh Bloody Mary featuring a base of pureed heirloom tomatoes with only the seeds strained out for a full-bodied, pulpy texture. He’ll add a bit of his own long-simmered veal stock to create “a full, round texture in the mouth.” Completing the drink are fresh horseradish, cilantro, celery salt, cumin, telicherry black pepper, grains of paradise and a lacing of North Shore Vodka, a small-batch spirit from a nearby craft distillery. He’ll price it at a mere $6.

“Part of our concept is to show that things don’t always have to be expensive,” des Rosiers said.