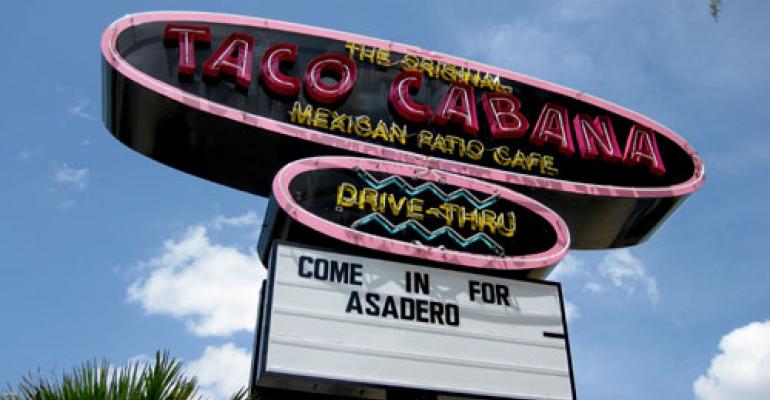 The 158-unit Taco Cabana is rolling out a renovation program aimed at building dinner business and encouraging customers to linger at the Mexican fast-casual chain.

The 32-year-old chain in July debuted six remodeled stores in the Fort Worth, Texas, market, part of a $4.5 million to $5 million investment in upgrading Taco Cabana’s fast-casual positioning. Changes include replacing the bright pink and teal color scheme with a calmer color palette, installing “work station” islands and free Wi-Fi in the dining rooms, adding a service manager to deliver orders to guests at tables rather than have them wait for a number to be called at the counter, and expanding the menu with three desserts.

In addition to the six stores in Fort Worth, the company has also renovated a store each in suburban Hurst and Irving, Texas. The company expects to have all of its 40 units in Dallas-Fort Worth area renovated by year-end, said Todd Coerver, chief marketing officer for the chain, which is a San Antonio-based division of Carrols Restaurant Group Inc.

The renovations, which began in March, are already yielding a return for the 24-hour Taco Cabana, Coerver said.

“Dinner [at the remodeled restaurants] is outpacing the market by about 4 to 5 percent and the total sales lift is outpacing by a 2 percent,” he said. “That’s one of the objectives is to put in people’s mind that this is a dinner destination. We’re already evenly split with dinner and lunch. This brand actually does well with dinner.”

“It gives people the opportunity to stay and spend some more time in the store,” he said. “They can have another drink and than order a dessert after dinner instead of having to rush out and get dessert somewhere else.”

A point-of-sale terminal has been added to the dining room so the service manager, a new position in the restaurants, can offer added sales of beverages and desserts, Coerver said.

“During the rush periods during lunch and dinner, the host can check back around and ring it up and send it to the kitchen without leaving the dining room,” Coerver said.

A center island with outlets for laptops has been added for single diners or computer users.

“We’re trying to encourage more hanging around,” he added. “Taco Cabana was one of the original fast-casual concepts even before it became a even a term. There was the quality, handmade food at an affordable price with compliment of beer and margaritas. There were casual –[dining] cues.

“Part of this effort is to reaffirm the position in the fast-casual segment,” he said.

To that end, Taco Cabana has added handmade wooden tables and free chips so customers can take advantage of the salsa bar, “which is one of our main elements,” Coerver said. The company in June switched to all white-meat chicken breast in its dishes. Exterior awnings have been changed from colored fabric to wooden slats. The patios also have new furniture.

“The big patios have always been part of Taco Cabana’s identity, so we’ve added teak tables and higher-end wicker chairs,” he said.

The front counter of the renovated restaurants features an ice bin filled with beer and margaritas, which are now offered on the rocks as well as frozen. Earlier in the summer, Taco Cabana rolled out a Happy Hour program from 4 p.m. to 7 p.m. on weekdays with half-price nachos and $1.50 margaritas. A premium tequila “boost” is offered for $2.50 for a limited time.