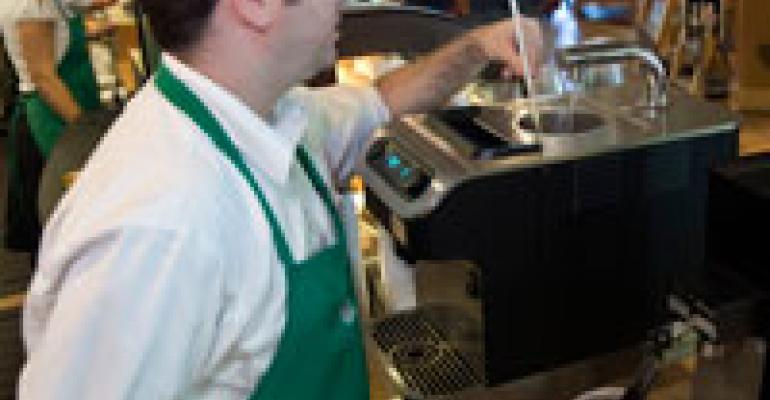 SEATTLE Starbucks has rolled its new Clover coffee-brewing machines into 10 units here to begin the introduction of a proprietary coffee line priced at $2 to $4 per cup. The hot and iced drinks are brewed a cup at a time from limited-production beans ground specifically for that order on the Starbucks-owned Clover system, yielding a product that the coffeehouse giant is touting as unmatchable by its legion of competitors.

The announcement coincided with areport in USA Today that the chain plans to unveil a new, more healthful breakfast lineup systemwide on Sept. 3. The new selections will be lower in calories and higher in fiber and will feature more fruit, according to the story. It also noted that Starbucks plans to revamp its lunch and dinner choices by next year.

The brand’s parent, Starbucks Corp., described the phased rollout of the new coffee line as “a key initiative to transforming the company.”

The new array -- Clover Crafted Small Batch Coffees -- will be adopted by units in Boston and San Francisco over the next few months, Starbucks said. The coffees will be listed on a separate chalkboard menu, as well as in a takeaway listing, according to a spokeswoman.

Four initial Clover Crafted coffees initially will be offered: Costa Rica Agrivid, El Salvador Pacamara, Tanzania Blackburn Estate and Zambia Kasama. Starbucks stressed that each is grown in small lots that the company was able to secure because of its relationships with growers and experience in buying coffee.

The selections will rotate monthly and will be offered only in units that are equipped with the Clover equipment.

Prices range by variety and serving size, the spokeswoman said in an e-mail. The brews will be offered in Starbucks’ 8-ounce short, 12-ounce tall and 16-ounce grande sizes, but apparently not the vente extra-large size.

Starbucks will sell the small-batch coffee beans for at-home use, but the company said patrons would have to use a coffee press. It has not announced plans to market the Clover equipment to consumers.

Starbucks bought Clover’s manufacturer in April for an undisclosed amount. In announcing the new coffee line, Starbucks described the Clover as “one of the most significant innovations in coffee brewing since the introduction of the espresso machine.”

Starbucks chairman and chief executive Howard Schultz reportedly discovered the Clover equipment during a visit to New York City, where one user was charging $7 for a cup.