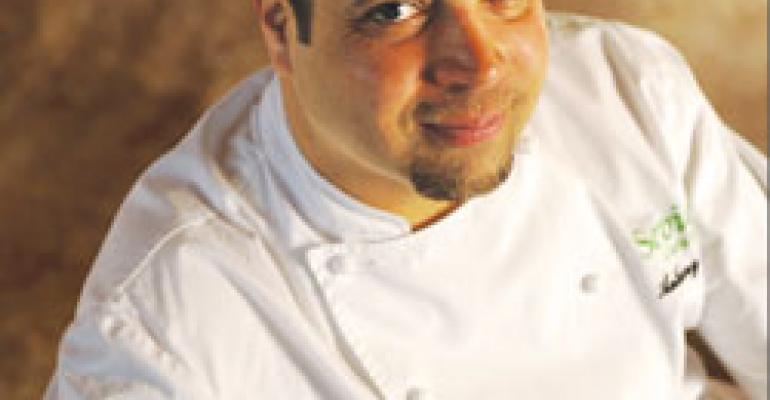 Removing Chilean sea bass from the menu at Seviche in Louisville, Ky., was a huge risk for owner-chef Anthony Lamas. The buttery-fleshed fish was the core of his restaurant’s most popular dish, and he knew some customers would balk when he switched to sable fish.

Yet Lamas did it anyway and disclosed his motives for doing so on the city’s most popular restaurant blog. The move yielded cheers and jeers from readers; most said he did the right thing by ceasing to sell an endangered species, while others implied it mattered little since most seafood and meat supplies aren’t managed with those species’ welfare in mind.

“You’re always going to be seen as controversial if you step up and do something different, but I knew I had to,” Lamas said. “That others are still selling [Chilean sea bass] is not my business.”

The rising tide of books and movies demonizing unsustainable food production practices, along with a growing number of activists pushing their causes, has more U.S. consumers questioning what they are eating and more chefs rethinking what they are serving. While Lamas said he views the change as highly positive, he said the result is mounting pressure on restaurant operators to be more diligent about sourcing sustainable foods.

“All these TV shows about food have people not only wanting to be more adventurous with what they eat, they want it to be better for them,” he said. “People have seen documentaries like ‘Food Inc.,’ and say they don’t want a chicken they saw raised this way in that documentary. They speak up more about it.”

Lamas said he doesn’t expect his decision to remove Chilean sea bass from his menu will win him a measurable number of new customers who support sustainable-seafood causes, but he said declaring his stance can’t hurt at a time when a growing number of consumers understand what he’s trying to help achieve.

In late April, Restaurant Gary Danko in San Francisco removed frog’s legs from its menu in a nod to declining frog populations worldwide. It was declared the first restaurant to take such a step by a group dedicated to amphibian conservation.

“I commend Restaurant Gary Danko’s decision to remove frog legs from their menus, and I urge other restaurants to do the same,” Dr. Kerry Kriger, founder and executive director of Santa Cruz, Calif.-based Save The Frogs!, said in a statement.

Much larger companies are aiming to create similarly positive consumer sentiment. On Earth Day, April 22, Delaware North Cos. pledged to cease using 90 percent of seafood species on the Monterey Bay Aquarium Seafood Watch “avoid list” and create a plan to address the remaining 10 percent by the end of this year. Christian DeVos, vice president of food and beverage for DNC’s parks and resorts division, said the company’s chefs urged the change to serve only seafood harvested from “abundant fish populations that are harvested responsibly.”

Walter Bundy, executive chef at Lemarie in Richmond, Va., said sourcing sustainable products is simply the right thing to do, regardless of whether customers buy into it. While he believes many older customers don’t care where their food comes from as long as it’s tasty, younger and well-educated customers seek such options when choosing where to dine out.

“If you ask a guy who’s 70 whether he gives a crap that his filet is sauced with hollandaise from free-range eggs, he’ll say no,” Bundy said. “But younger generations have embraced the local concept, and that means it only will become more important.”

Robbie Bellew, banquet chef at French Lick Resort in French Lick, Ind., said he used to place greater effort into selling customers on the virtues of foods grown and harvested nearby. But now some guests are turning the tables and demanding he source local foods for their events.

“When a customer requests a cheese as specific as Capriole from southern Indiana, you know she’s thought it through,” Bellew said.

Meeting knowledgeable clients’ demands for locally grown menus does ratchet up expectations, Bellew said, but he insisted he savors such challenges because of their potential impacts.

“If chefs at individual restaurants and resorts start buying only these products, that has to eventually influence bigger chains somehow,” he said. “I’d like to think that those chefs out there are leading that wave of change.”