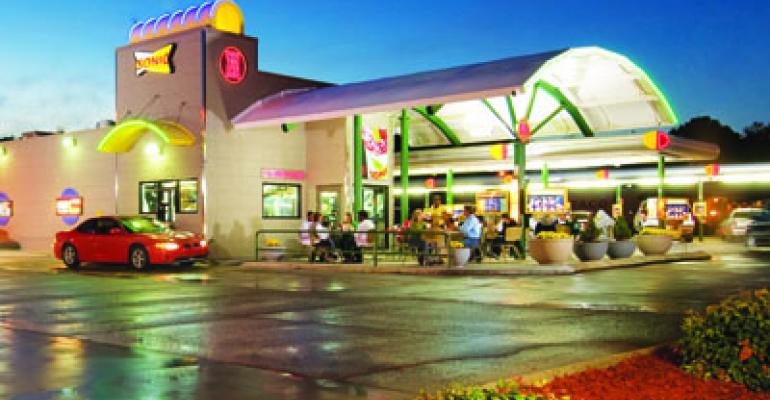 Sonic net income up in 4Q

Sonic Corp. on Tuesday reported fourth-quarter net income of $12.3 million, or 20 cents per share, compared with $4.7 million, or 8 cents a share, in the prior-year period, in which it had taken an impairment charge of $15 million related mostly to the fair value of company-owned drive-ins.

Revenue in the Aug. 31-ended fourth quarter dipped 2.5 percent from the prior year, dropping to $151.2 million from $155.1 million, the Oklahoma City, Okla.-based company said.

The system of more than 3,500 drive-in restaurants reported that same-store sales decreased 0.5 percent during the fourth quarter, with an increase of 0.4 percent at company drive-ins and a decrease of 0.6 percent at franchise drive-ins.

Clifford Hudson, Sonic’s chairman and chief executive, said, “One of the notable achievements in fiscal 2011 was company drive-in sales performance.

“While we expect continued sales volatility due to external economic challenges, we believe the improvements we have made to our business will continue to yield positive results in 2012 and for the long term,” Hudson said.

For the 12 months ended Aug. 31, the company said revenue declined 0.9 percent, to $546.0 million from $550.9 million in the prior year. The company said that the revenue decrease was primarily attributed to the refranchising of 22 company drive-ins over the last two fiscal years.