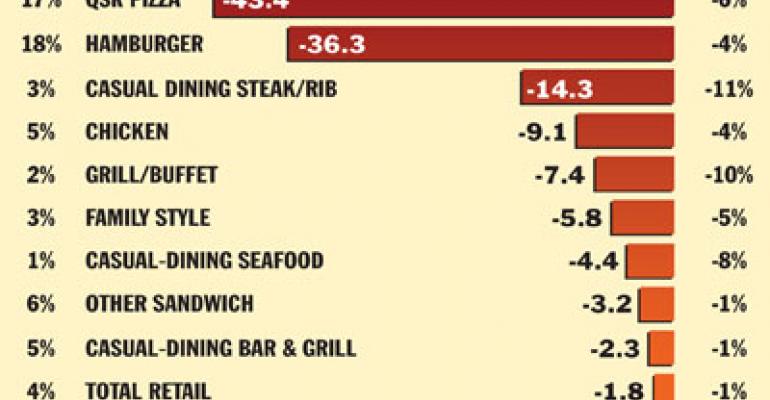 While relentless economic pressures are forcing more consumers to eat their evening meals at home, even after the economy picks back up the dinner hour may still be a lonely time at restaurants.

Dinner traffic has been weak since 2003 and was down 1 percent in the year ended February 2008, after being down 1 percent in the prior year, according to The NPD Group. Factors much bigger and potentially longer-lasting than financial woes are driving the continuing traffic losses at dinnertime, say officials at Port Washington, N.Y.-based NPD. Namely, NPD data points to a sea change in the consumers’ attitudes about eating dinner out, versus at home.

A new NPD study found that while financial reasons are the main driver for some consumers’ cutting back on visits to all restaurants at dinner, others are eating at home more frequently because they are largely uninterested in visiting restaurants for the evening meal, except for special occasions.

Many of those consumers who choose home over a restaurant for dinner are doing so not because they can’t afford to eat out, but because for them eating at home is more leisurely, more enjoyable, gives them more control over what they and their families eat, or allows them to make healthier choices, the data found.

“This slowdown we’ve been seeing at supper for a while…this isn’t about the economy,” said NPD analyst Bonnie Riggs. “It’s not the whole story.

The financial thing will come and go. But these other things [operators] have to find a way to address.”

All segments of the industry have become vulnerable to consumers’ shifting dinner behavior. Quick service, which accounts for 64 percent of total industry traffic at dinner, currently is experiencing the steepest traffic declines at the evening meal. In the quarter ended February 2008, quick-service dinner traffic was down 2 percent on top of a 2-percent decline for the same year-earlier quarter. During the same period, midscale dinner traffic was down 1 percent, following a 5-percent decline a year earlier.

Categories dependent on dinner traffic experienced the most sizable incremental traffic losses, NPD found. In the quarter ended February 2008, quick-service pizza operators, which account for 17 percent of dinner traffic, saw a 6-percent decline from the prior year. Even the hamburger category, which captures the largest share of quick-service dinner traffic at 18 percent, declined 4 percent.

“Those are big numbers,” Riggs said. “It’s more significant to QSR, because QSR has a bigger share of the market.”

Financial concerns are the main reason consumers have reined in their dinnertime visits across all industry segments, but food also is steering consumers away from quick-service restaurants, NPD found. Nearly 40 percent of consumers cited problems with food—including it was too high in calories, there were not enough healthy options, they don’t like it, the food quality has decreased, or it has grown boring—as the reason for not visiting quick-service restaurants at dinner.

In contrast, just 32 percent said the same about midscale restaurants, and only 24 percent said it about casual-dining outlets. Lack of time and money were the primary reasons consumers said they are not visiting casual-dining concepts at dinner. Consumers said they were staying away from midscale eateries because of the food and the fact that such concepts are not front-of-mind.

“This change in consumer needs and wants… I don’t think [operators] realize the magnitude of it,” Riggs said. “It’s bigger than they thought.”

Despite a major shift in consumers’ evening-meal habits, Riggs and other industry experts believe that operators can still win back dinner visits.

The casual-dining segment already has started down that road, Riggs noted. She attributes the recent 1-percent boost in casual-dining traffic to the many value-based, limited-time offers that segment leaders have rolled out of late.

“Casual-dining and midscale restaurants are most likely to increase traffic by offering better value for the money, such as menuing daily specials, having coupons, [or] menuing combination meals that include a free drink or perhaps a dessert,” Riggs said.

Given that unhealthy food or food that’s too high in calories drive consumers away from quick-service concepts, Riggs said the segment would benefit the most from offering healthier, lower-calorie menu choices.

“In this study consumers said they wanted to see more snack wraps [and similar kinds of sandwiches],” Riggs said. “That’s the next thing they think is healthier, fresher.”

With more grocery outlets offering high-quality, good-tasting prepared and ready-to-cook meals and fast-casual chains elevating their offerings and their dining environments, there’s a huge opportunity for quick-service operators to up the ante at the evening meal, said Aaron Noveshen, owner of The Culinary Edge, with offices in San Francisco and New York.

“[Quick-service] is not doing anything but playing the convenience role,” Noveshen said. “They’ve got to create a defensible position with flavor…things to execute that people can’t do at home in a fast and easy way.”

In addition, given that a significant portion of restaurant dinner food dollars are spent by families, Noveshen says quick-service operators have to start catering to that group.

“The whole family experience doesn’t exist [at quick-service],” Noveshen said. “They’ve got to find a way to bring in families and create an emotional attachment.”

Operators may be reluctant to make changes during tough times, but William H. Bender, principal at W.H. Bender & Associates in Santa Clara, Calif., tells his foodservice clients that now is the time to act.

“It’s a good time to look in what I call the brand mirror…to continue to improve what we do,” Bender said. “Everybody needs a reminder [to go back to basics].”

Though some operators are bold enough to make changes during a downturn, they often make the wrong ones, said Ron Santibanez, president of Qualified Solutions Consulting Inc. in Moreno Valley, Calif.

“During tough times, [many operators] try to cut back on labor and food costs,” Santibanez said. “They are not thinking about service.… They don’t look at it as an experience. When things do turn around they may have done damage beyond repair.”

To survive the downturn and beyond, Santibanez advises operators to revisit their menus and “keep it fresh, keep innovating,” and to “take out any [operational] glitches.”