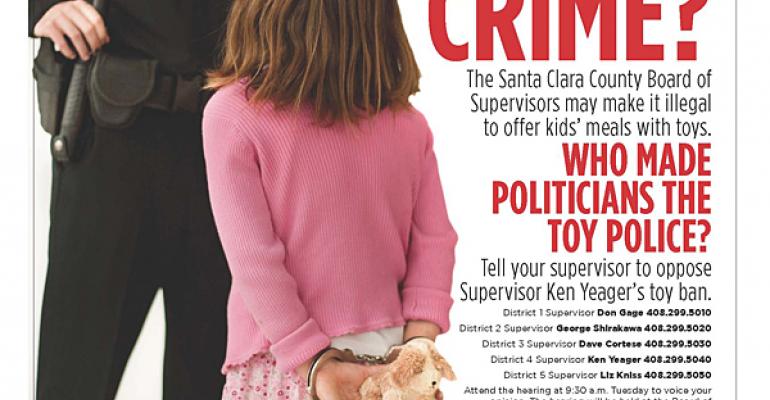 While San Francisco’s proposal to restrict the use of toys and other “incentives” in the sale of restaurant kids’ meals may not see formal hearings until next month, agitation within some foodservice industry quarters is already running high.

San Francisco Supervisor Eric Mar and two colleagues submitted this month a draft ordinance that in many ways mirrors a law in nearby Santa Clara County, restricting marketing through children’s meals that do not meet specified nutritional guidelines.

The Santa Clara measure, believed to be the first of its kind in the nation, as well as the new San Francisco proposal, are each based on the premise that childhood obesity can be reduced by prohibiting restaurants from offering free toys, online gaming time or other incentives along with meals marketed toward children.

While the Santa Clara measure targets thresholds for total calories, calories from fat, trans fats, sodium and sugar, the San Francisco proposal requires that all qualified meals include a half-cup of fruit and three-quarters of a cup of vegetables.

He noted that the industry serves what customers want, and that many chains have voluntarily increased offerings of fruit slices, low-fat yogurts, grilled foods and bottled waters in recent years in response to such consumer demands.

“This proposal has gotten the attention of the industry,” Conway continued. “We can’t help but speculate that these proposals are largely driven by the desires of individual politicians to have their names in lights. We remain skeptical about the effectiveness of a proposal like this to have any kind of meaningful impact on childhood obesity and it is clear, based on comments on websites and listening to the radio that many adults, and parents in particular, find the approach to be offensive.”

The Santa Clara measure, because it covers just the unincorporated areas of that county, impacts a relatively small number of restaurants — some estimates put the number at a dozen or fewer.

The San Francisco proposal would impact a greater number of restaurants. According to restaurant websites, Burger King, KFC, McDonald’s and Taco Bell, alone, operate about 48 locations in the city. The proposal also may be of greater interest to the restaurant industry because it represents an escalation in the strategy of restricting the use of incentives to sell kids meals that don’t meet sponsors’ nutritional expectations.

The local Golden Gate Restaurant Association said it has concerns about the San Francisco proposal.

“We are opposed to the continuing over regulation of the restaurant industry,” GGRA executive director Kevin Westlye said. He said his group is “currently evaluating the toy ban [proposal] and political landscape before proceeding.”

Proposed restrictions on the use of toys or incentives in the sale of restaurant foods to children may soon arise in other cities and states.

A report in the San Francisco Chronicle stated that Ken Yeager, the Santa Clara County supervisor who proposed that jurisdiction’s kids meal law, has received inquiries about the legislative strategy from officials in Chicago, New York City and Orange County, Calif. An e-mail to Yeager’s office seeking confirmation of such inquiries was not returned by press time.

McDonald’s, perhaps the world’s best known purveyor of kids meals and the operator of at least 19 restaurants within San Francisco, according to its website, declined to comment on the proposed San Francisco law.

The Oak Brook, Ill.-based chain of more than 14,000 U.S. restaurants and another 18,000 in other countries, suggested that trade groups representing the entire industry, such as the CRA, were a more appropriate source of feedback on legislation. Recent changes to McDonald’s menu offerings have included apple slices, 1-percent fat milk and water options.

Comment or not, McDonald’s, and any restaurant peer that offers free toys or other incentives when selling kids meals, will find operations and marketing more complicated in San Francisco if the measure passes.

It is unclear from the wording in the San Francisco draft ordinance whether or not the vegetable requirement could be met with the aid of such condiments as ketchup or relish. A call seeking clarification from Mar’s office was unreturned as of press time.

What is clear is that the use of French fries to meet the vegetable requirement would be questionable in many cases, as calories and calories from fat likely would push many possible meal combinations out of compliance in regards to restrictions on total calories or percentage of calories from fat.

While large restaurant companies potentially impacted by the proposed San Francisco law are declining comment on the measure, some foodservice industry vendors are letting complaints fly.

“It is a parent's responsibility to choose nutritious food for their child,” he said. “When the government tries to ban toys or force people to eat a certain way, it is a blatant attempt to limit consumer choice. These government officials are not representing their constituents. If they keep this up, they will not be re-elected.”

Conway, of the California Restaurant Association, indicated that his group still feels stung by the actions of Santa Clara supervisors. A majority of those elected officials enacted their county’s kids’ meals restrictions and then, after the fact, gave the trade group and others in the industry 90 days to offer an alternative that essentially covered the same ground.

“We look forward to any opportunity to be part of a comprehensive effort to address childhood obesity and we hope to be invited to sit down with other stakeholders for that,” Conway said. “But, essentially what you have here are folks grasping for silver bullets and simple answers to complex issues. When they are ready to look for complex answers to complex issues we’re ready to work with them.”

Proposal details:
The proposed San Francisco ordinance prohibits the use of toys and other incentives to sell single food items with more than 200 calories and 480 milligrams of sodium. It permits about 24 percent more calories for meals than its Santa Clara counterpart, or a total of 600 calories, and sets the total-meal sodium level at 640 milligrams, versus 600 milligrams in Santa Clara’s law.

San Francisco’s proposed law also prohibits single food items or meals that get more than 35 percent of their total calories from fat, or more than 10 percent of their total calories from saturated fat, “except for fat contained in nuts, seeds, peanut butter or other nut butters, or an individually served or packaged egg, or individually served or packaged low-fat or reduced fat cheese.” Nothing that contains more than a half of a gram of trans fat could be sold with the aid of a toy or other incentive, wording in a draft of the proposed law indicates.