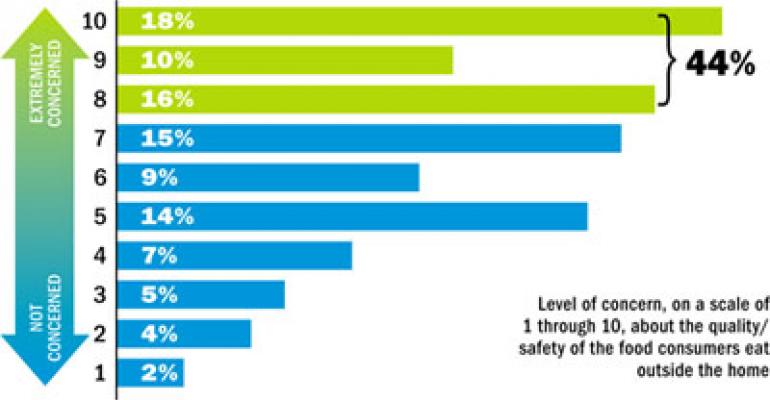 According to Deloitte LLP’s 2010 Consumer Food Safety Survey, 44 percent of the 1,012 individuals questioned were “extremely concerned” about the quality and safety of the food they eat away from home. Only 34 percent had such worries about food at home, Deloitte said.

Over the past several decades, the foodservice industry has found itself having to deal with repercussions stemming from sometimes-deadly foodborne-illness outbreaks. While several such incidents were linked to contaminated produce or other ready-to-eat products, operators have nevertheless found their businesses damaged as a result.

To help reassure customers, industry members have strived to improve the safety of their own operations and develop in-house systems that help to ensure the safety of the meals they serve and minimize the risk of foodborne illness. But most agree that is not enough.

As a result, the foodservice industry also has been actively urging the federal government to enact stronger and more sweeping measures that would help ensure the safety of the U.S. food supply and distribution system.

Last July the U.S. House of Representatives passed comprehensive food safety legislation by a vote of 283 to 142. The National Restaurant Association, however, said it prefers the Senate version of the bill. While both measures give the Food and Drug Administration more power to investigate food producers, require manufacturers to write and facilitate safety plans, and track and recall unsafe foods, the Senate bill contains traceability requirements that would not burden operators with onerous record keeping.

However, momentum appears to be slowing in the quest to pass the bill.

“Over the past four weeks I’ve been told each week by more than a few senators and a couple of staffers that, ‘The bill is going to come to the floor this week,’” foodborne-illness litigator and food safety activist William Marler of Seattle said. “But then financial reform moved in front of it, and now immigration looks as if it might bump it out of the way again.”

National Restaurant Association public-affairs specialist Dan Roehl said he believes Congressional action on food safety will “be done before the end of the year.” While “grateful” to Congress for tackling food safety, he said the NRA nevertheless is lobbying to protect operators from unduly expensive or complicated requirements tied to systems for tracking food across the supply chain and a new Reportable Food Registry intended to tip off regulators to unsafe products.

“We want an effective [trace-back] system so that when there is a problem we can move quickly,” Roehl noted. However, he added, Congress must keep in mind that operators in the highly diverse foodservice industry need “flexibility” in terms of record formats and record keeping technologies that may be required for food tracking purposes.

Even before the latest federal legislation began taking shape, 2006’s deadly E. coli outbreak associated with bagged spinach, among other produce-related contamination problems of the past decade, spurred the refinement of proprietary trace-back systems. Mad Greens Inspired Eats of Denver, a nine-unit, fast-casual chain selling salads, sandwiches and soups, is one of the companies benefiting from that situation.

“We employ a tracking system, developed by our not-for-profit produce cooperative that tracks every box of produce we use, not just back to the producer or distributor, but to the specific field where the produce was grown,” Mad Greens chief executive Marley Hodgson said. “If a problem arises, such as a recall, we know in an instant what ingredients may have been affected and can remove defective product quickly—before it even reaches our customers.”

On a larger scale, a recent survey of 263 firms that grow, process or distribute fresh produce to food-service and retailers in the United States indicated that about 70 percent of the industry is working to implement the Produce Traceability Initiative, or PTI. The PTI, which is championed by the Produce Marketing Association, United Fresh Produce Association and the Canadian Produce Marketing Association, has a goal of making every case of produce traceable by electronic means across the entire supply chain by 2012.—[email protected]

Restaurant operators were not immune to food-safety challenges during the past 12 months. Among some examples:

In March, a franchised Subway restaurant in Lombard, Ill., was associated with more than 123 confirmed cases of shigella illness, 13 of which required hospitalization but have since been discharged. The restaurant reopened in April.