/sites/all/themes/penton_subtheme_nrn/images/logos/footer.png
Recent
Recent
Next round of states poised to open for dine-in restaurant service with capacity limits, social distancing requirements and mask mandates
May 21, 2020
Starbucks has regained 60%-65% of its pre-COVID-19 U.S. sales, says CEO Kevin Johnson
May 21, 2020
Taco Bell wants to hire 30,000 more employees
May 21, 2020
How Kevin Lillis adapted when the coronavirus forced Jaxon restaurant in Dallas to close right after it opened
May 21, 2020
How to Get the Most Out of Your Delivery Solutions
May 20, 2020
Featured
Lawmakers debate improvements to federal Paycheck Protection Program loans
May 22, 2020
CDC updates guidelines for reopening restaurant dining rooms and bars
May 21, 2020
Trending this week: McDonald's reveals its new dine-in safety procedures and more on the CDC’s guidelines for reopening restaurant dining rooms and bars
May 21, 2020
Restaurant executives press Paycheck Protection Program term extension with Trump
May 19, 2020
FsVoice
brought to you by 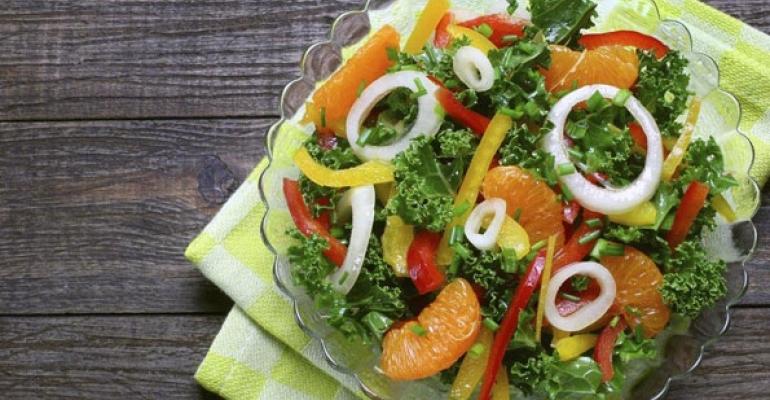 Creative warm weather LTOs help to drive sales with a mixture of sweet and savory ingredients.&nbsp; Sponsored by Ken&#39;s Foodservice.

If the mercury is on the rise, it must be time for operators to be thinking about adding salads to their menus.

The summer months, in particular, hold opportunities for restaurateurs who can create salads that appeal to consumers looking for a meal that is lighter yet still flavorful, experts say.

"The more innovative an operator can be in terms of offering main dish salads, the more it will be a big win for them," says Bonnie Riggs, restaurant industry analyst for the NPD Group in Port Washington, N.Y.

"Salads sell big time during the summer," says Ype Von Hengst, chef and co-owner of the Silver Diner. "It's become a normal phenomenon. People feel like they need less and want to eat lighter. During the winter they want hearty foods, more substantial meals."

The sale of main dish salads is growing during the summer as many operators offer them as creative LTOs. "[Restaurateurs] are thinking outside the box in terms of the salads they are offering," Riggs says, "and many kinds of salad that we're seeing are so appealing. Who ever thought we would see salads containing fruits and nuts. Now [restaurateurs] mix all those flavors together."

According to Datassential MenuTrends, 88 percent of restaurants feature a salad, with kale continuing to be one of the fastest-growing salad ingredients. Datassential research also finds that applewood-smoked bacon is the fastest-growing protein in salads, increasing its penetration on menus by 12 percent compared with a year ago. The research firm also notes that operators are increasing their cheese selections on salads by offering such premium varieties as goat, asiago and fresh mozzarella.

A wide array of salad dressings — both homemade and ready-to-eat — also are helping to fuel salad sales. In a study tracking ready-to-use salad dressing shipments from broadline distributors to foodservice operators, ranch dressing held the No. 1 spot, followed in second place by blue cheese. NPD says in terms of consumption, ranch, vinaigrette and Caesar dressings are growing.

Meanwhile, operators are looking to develop main dish salads that are every bit as creative as their more traditional protein-centric offerings. Newk's Eatery, the 70-unit fast-casual chain based in Jackson, Miss., launched a trio of standout salads for the summer, all of which are under 600 calories.

Newk's summer lineup features the return of its popular Red White and Blueberry Salad, an LTO that was a big hit last year for the brand, says Alan Wright, the chain's vice president of marketing and franchise operations. The salad includes spinach topped with freshly grilled chicken, strawberries, blueberries, watermelon, pecans and feta cheese, and dressed with fat-free raspberry vinaigrette.

The increasingly popular combination of sweet and savory elements is very refreshing on the palate, Wright says.

Wright says he expects salad sales to surpass those of sandwiches at Newk's this summer.

The Warm Roasted Local Veggie Salad includes Brussels sprouts, red beets and butternut squash that have been oven roasted and charred with agave and thyme, and then combined while they're still warm with red peppers, basil, rocket greens, kale, sunflower sees, pecans and dried apricots, and topped with house-made champagne vinaigrette. The selection sells for $12.99.

The Ultimate Power Salad combines grilled chipotle-seasoned Gulf shrimp with greens, spinach, kale, quinoa, cremini mushrooms, cranberries, feta cheese, chopped hard-boiled eggs and sunflower seeds, and dressed with champagne vinaigrette. The salad is available in a half portion for $10.99 or a full portion for $14.99.

Both salads are available with grilled salmon or chicken, Von Hengst says, adding, "They both satisfy many markets — flexitarian, vegetarian, anybody."

Previously, salads featured on The Greene Turtle's summer menu have performed well — above normal, in fact, according to Bob Barry, chief executive of the chain.