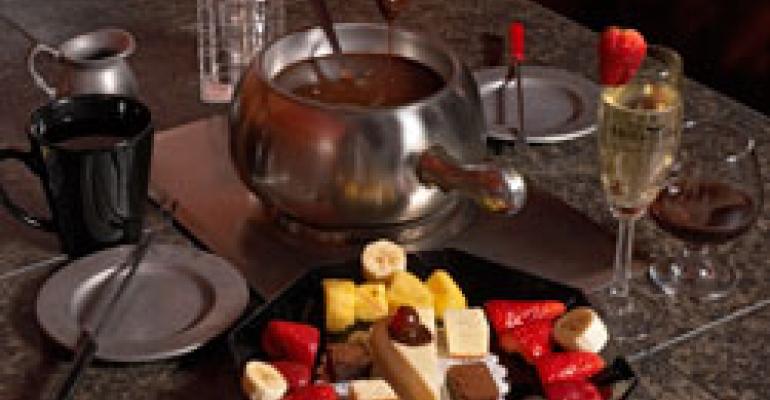 After getting a lot of tough love from customers and the economy this year, chain and independent restaurants nationwide have developed special Valentine’s Day menus and promotions to drive traffic this weekend.

Because the holiday will fall on Saturday this year, many restaurants will have to alter the usual weekend game plan to accommodate more two-tops and won’t benefit from a midweek sales spike Valentine’s had produced in years past. As such, operators everywhere are courting couples, and even some singles, with special deals for a special evening.

The Larkspur and San Mateo, Calif., branches of The Melting Pot, for instance, on Friday and Saturday will feature the “Foods for Love” promotion, which includes a four-course menu and a glass of wine, starting at $65 per person. The fondue-focused brand markets itself aggressively as a place for romantic occasions and features “Lovers Lane” seating, consisting of secluded private booths for couples.

“Foods for Love” includes items meant to enhance romance, such as Champagne; chocolate, which has the chemicals serotonin and phenylethylamine, which activate pleasure areas in the brain; broccoli, believed to increase virility; and strawberries, raspberries and bananas, the last of which contains an enzyme, bromelain, that some studies link to enhanced sexual performance in men.

The Melting Pot, a Tampa, Fla.-based chain of more than 141 restaurants in 37 states, each year hosts about 13,000 wedding anniversaries and marriage proposals. The brand’s systemwide Valentine’s Day promotions this year include a “Perfect Pairings” application on the company’s Facebook page, and more than $2 million in prizes and giveaways.

Casual-dining chain P.F. Chang’s also will offer a four-course prix-fixe menu, for $39.95. The “Chang’s for Two” menu lets guests choose two cups of soup, one appetizer for sharing, two entrees and two miniature desserts. Fleming’s Prime Steakhouse & Wine Bar also will offer a sharing menu for two this weekend, priced from $89 to $98. The meal includes a $25 gift card that can be redeemed on any visit to the restaurant through March 31.

Bonefish Grill announced that it has partnered with chocolatier Lindt to offer diners a complimentary 1.2-ounce chocolate bar at the end of their meals on Valentine’s Day.

“The Heart-Shaped Pizza has evolved to the point where it’s become an annual tradition for many,” said Mark Strickler, vice president of brand marketing for Papa Murphy’s. “We’ve always thought of it as a party pizza for families or groups of kids. However, a few true Papa Murphy’s sweethearts have shared with us that they get this pizza for a meal together.”

Independent restaurateurs are getting in on the act as well, often with playful menus and promotions.

Chef Daniel Orr of FARMbloomington in Bloomington, Ind., will offer a three-course “aphrodisiac Valentine’s Day dinner” for $45, with courses divided into “Getting Warmed Up,” “Sealing the Deal” and “Sweet Success,” with an after-dinner selection of chocolates labeled “Pillow Talk” on the menu. At the adjacent FARMbar, Orr will serve an oyster and Champagne special all weekend, with oysters sold by the piece at market price and Champagne starting at $6 a glass.

In Chicago, modern Indian restaurant Marigold offers not only a “Kama Sutra Tasting Menu,” but also a complimentary copy of the Kama Sutra. The tasting menu is $50 per couple, and $70 per couple including a bottle of wine.

For those single diners not so in love this Valentine’s Day, Atlanta restaurant The Shed at Glenwood will offer the “Better Off” dinner, a $65 four-course meal. Available at the restaurant’s bar and chef counter Friday and Saturday night, the prix-fixe has adopted a “love stinks” theme for its courses: “sour,” or goat cheese with sour-cherry preserve; “violent,” or chicken hearts on a skewer with garlic-cheese grits; “black,” or cast iron-seared strip steak with macaroni and cheese; and “bitter,” or lemon tart with fresh blackberries.

Cindy Shera, owner of The Shed, told the Atlanta Journal-Constitution that the “Better Off” menu was developed for diners who said they felt excluded because area Valentine’s deals were designed just for lovers.

“They felt a little ostracized from the menu,” she said. “So we thought we would have a little fun with it and take care of everybody.”

Perhaps restaurant guests looking to make a better connection with the opposite sex could turn to Burger King this Valentine’s Day. The quick-service chain announced it would re-release its “BK Flame” scented body spray, which sold out in just three days after its debut in December. The spray, which has a hint of flame-broiled meat, is available for $3.99 at Ricky’s retail outlets and online at www.firemeetsdesire.com.

“People simply couldn’t get enough of Flame,” said Brian Gies, vice president of marketing impact for Burger King, “even paying more than $100 for it on eBay. Valentine’s Day presented the perfect opportunity to reintroduce the scent and give those who missed out in December the chance to channel the charms of the King.”