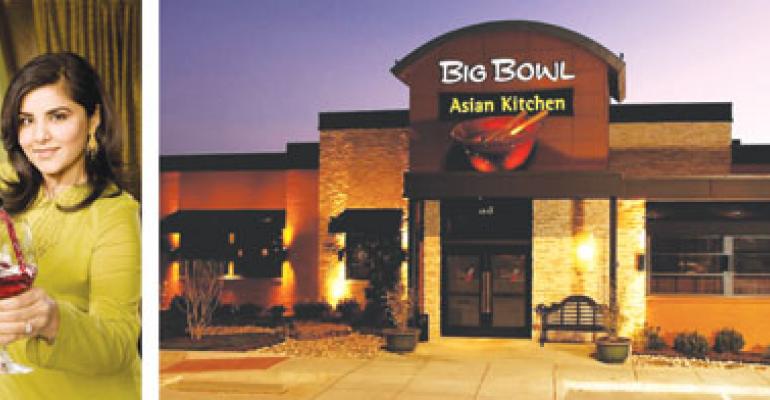 As beverage director for San Francisco-based Mina Group restaurants, Noah Ellis aims to do a whole lot more with his bar program than simply offer guests a choice of different high-end vodkas to put in their Cosmopolitans.

Aware that the beverages restaurants offer nowadays say as much about the concept as the food, Ellis strives to differentiate the drinks available in each of the 15 concepts operated by chef-owner Michael Mina. For instance, a traditional steakhouse like Mina’s Bourbon Steak requires more classic cocktails, whereas a unique venture like the group’s new small-plates restaurant, XIV in Los Angeles, needs show-starters like a “Chupacabra,” a blend of tequila, fresh lime juice, mint and ginger beer with sliced jalapeños and chile salt on the rim.

Ellis, 25, is one of a growing number of young beverage operations professionals who are pouring a strong dose of creativity into bar programs across the country. Although their roles and titles vary depending on the concept, segment or company size, these folks write beverage playlists, meet with vendors, research and design cocktails and other drinks, and train employees to execute what they envision.

Some beverage managers are certified sommeliers and handle the purchasing of wine, beer and spirits, as well as nonalcoholic beverages. Others are self-taught bartenders who have spent off hours studying the expanding world of beer and liquor.

With headlines dominated by news of falling stock prices, a frozen credit market and bank takeovers, beverage managers note that it’s no surprise consumers are seeking refuge in cocktails, especially those that make them feel pampered, such as organic-wheat vodka, a rare 23-year-old rye whiskey or a crisp white wine from Greece.

“Now more than ever, restaurants are places where people come to escape,” says Alpana Singh, director of wine and spirits for Lettuce Entertain You Enterprises Inc., based in Chicago. “We are really focused on service and honing in on value. People are tired of getting nickeled and dimed.”

For the beverage programs at LEYE’s more than 30 restaurants, that means Singh is trying to work with suppliers to create wine events where guests can try exciting wines at reasonable prices.

At LEYE’s more casual venues the wine program includes 8-ounce pours of “favorite wines” for $5.95. Other restaurants offer a “Real Hot 40” wine list featuring a limited number of seasonal “hot wines of the moment,” she says.

LEYE’s eight-unit Big Bowl chain recently adopted a “green mission,” and the wine list was changed to include a limited number of organic and sustainable wines.

Singh, a master sommelier, buys wines for some restaurants but serves as an assistant to restaurant-level sommeliers at others.

Some beverages are purchased at the corporate level to pool buying power, Singh notes, while individual restaurants buy other wines and liquors.

At 32, Singh has been with LEYE for nine years, starting as a sommelier at Everest, one of the company’s fine-dining restaurants. After years of putting in 12-hour days working the floor, Singh now spends more time training servers and bartenders, researching new bar menu options, and developing supplier and distributor relationships.

“It’s not enough just to know about service,” she says.

Given that most LEYE restaurants follow the industry standard of $3 out of every $10 in sales being attributed to beer and wine, she says, “beverage buyers can’t get complacent.”

High-grossing restaurants and nightclubs such as Tao Asian Bistro at The Venetian in Las Vegas see beverage sales accounting for about 45 percent of revenue, which is a huge figure, given that Tao reported sales of $56 million last year. Of beverage sales, about 65 percent is from liquor, says Edward Allen, director of beverage operations for the Tao Group in Las Vegas.

Allen also developed the bar program for Tao Beach, a poolside bar that serves as an extension of the nightclub on some nights, as well as Lavo, a restaurant and nightclub in The Palazzo casino and resort complex next door.

A sommelier that started in the kitchen and worked as a bartender, Allen, 30, is a big believer in reading and travel.

“The best beverage managers travel not only to the wine regions, like Napa and Sonoma, but also to places like Tennessee to visit distilleries,” he says.

Beverage products are constantly changing, as are consumer preferences, he adds.

Mina Group’s Ellis agrees, noting that mixed drinks these days are borrowing more flavors from both the sweet and savory side of the menu, such as ginger, tamarind and muddled herbs. Ellis says he tries to design cocktails that cleanse the palate and refresh.

At Tao, “green” spirits such as organic vodka are popular, as are specialty cocktails such as the “Tao-tini” featuring mandarin- and raspberry-infused vodkas, rum, cranberry and fresh lime juice.

Despite economic pressures on consumers that have dampened restaurant sales across the country, Allen says he hasn’t seen liquor sales drop in recent months, nor are guests trading down to less expensive brands. Tao’s specialty cocktails range in price from $10 to $12.

Allen is responsible for staying on top of what’s selling, maintaining inventory and profit-and-loss accounting. However, like most beverage directors, a big part of his job is training.

Staff members at Tao are required to attend one-hour, weekly beverage classes, three out of every four weeks per month. Among the topics studied are sakés, teas or white Burgundies.

Training is also a key aspect of the job for Laura Maniec, director of wine and spirits for New York-based B.R. Guest Restaurants, operator of about 20 restaurants ranging from the high-end Italian restaurant Fiamma with chef-partner Fabio Trabocchi, to the casual Wildwood Barbeque.

Maniec also teaches at the French Culinary Institute in New York, offering students a window into the world of beverage pricing and cost controls.

One of two beverage managers at B.R. Guest, Maniec sees staff training as an antidote to creeping restaurant costs. “The more we train, the more restaurant sales go up,” she says, “and the more they sell, the less we have to worry about costs.” Still, the company is working to manage costs in other ways, such as shifting the schedule to receive fewer deliveries per week and taking advantage of the group’s collective buying power whenever possible. Maniec also seeks out lesser-known wines from countries like Spain and Greece that offer good quality for the price.

Although B.R. Guest has seen guest counts decline, “once they’re here, they’re still buying what they want,” and not trading down to less expensive liquors, Maniec says.

Across the board, the classic martini made with high-end vodka is a top seller, ranging in price from $11.50 to $14 at the various B.R. Guest venues. At the company’s Dos Caminos Mexican Kitchen, premium tequilas and margaritas are the stars, accounting for up to 45 percent of sales.

Maniec also started as a server and bartender and, now age 29, is studying to become a master sommelier.

She feels she benefited by having a great mentor in her predecessor, Greg Harrington, a master sommelier-turned-winemaker who now owns Gramercy Cellars, a boutique winery in Walla Walla, Wash.

“I couldn’t go to school for what I learned from him—things like integrity,” she says.

To those who aspire to beverage operations, Maniec offers this advice: “Seek out a great mentor. Really research it, the way you would a college. Find someone amazing that works in a restaurant and offer to put away boxes or do whatever to learn what you can.”

Many in the business, however, say they didn’t have a career path in mind when they started out.

Kelley Swenson, the 26-year-old bar manager and spirits director for the independent restaurant Ten.01 in Portland, Ore., was a bartender who helped open the concept two years ago. When the original bar manager left, he stepped into the role, working side-by-side with sommelier Erica Landon.

“I was given quite a lot of freedom, and the owners were willing to invest in the bar program,” Swenson says.

He notes that he doesn’t like it when people in his line of work call themselves “bar-meliers.”

“It’s not appropriate, because we don’t have the degrees,” Swenson says.

Still, he strives to be as educated about the beer and spirits he selects as his counterpart may be about wine.

“You’re expected to know every bottle and to be able to talk to your guests about it,” he says.

Being in microbrew country, Ten.01 tries to keep two local beers on tap, as well as have a unique collection of bottled beers. The restaurant is also well-stocked with more than 250 kinds of spirits, such as single-malt scotches that range in price from $6 to $89 per glass.

Because consumers are so much more adventurous these days, Swenson has designed a tasting program offering all bottles at a 2-ounce pour price as well as a half-ounce tasting price.

“You can taste anything on the wall for between $2 and $29,” he says. “They can pick their own flight or let us pick.”

Portland has a thriving cocktail scene, Swenson says, and nowadays house-crafted liquors and cordials as well as different types of bitters fascinate customers.

Despite rising costs, Swenson says he is working to avoid price increases by crafting cocktails in more affordable ways, such as using lesser-known “gems” found at better price points.

“That’s where really knowing the bottles on your shelf can help,” he says.

Knowing the suppliers is also a key aspect of the job, says Thomas Rekasis, food and beverage manager for the boutique Viceroy Hotel in Santa Monica, Calif. The Viceroy is known for its restaurant, The Whist, and the poolside Cameo Bar. Beverages account for about 50 percent of sales.

Trained as a sommelier, Rekasis, 28, has organized a series of Wine Maker Dinners featuring different brands, starting in January. In November, he plans to launch Single Malt Sundays, bringing in “ambassadors” of whiskey to talk directly to guests.

Despite the economy, consumer interest in rare bottles is high. Rekasis says he was able to find a $9,000 bottle of single-malt scotch, one of only four in the United States, and has already sold two shots at $2,000 apiece.

“And the bottles aren’t even here yet!” he says.

Because he works with both the food and beverage side, Rekasis is a believer in utilizing the kitchen for the bar program.

The hotel offers a cocktail of the day using ingredients that are fresh and available. Recently the kitchen had a jar of hibiscus flowers, which were used in a dish. Rekasis took the juice from the jar to create a hibiscus-spiked watermelon-and-vodka cocktail.

“There’s so much you can do when you line up your bartender with the kitchen and pastry chef,” he says.

Rekasis also likes to make nonalcoholic drinks available. He calls them “starters” rather than “mocktails,” and he challenges his bartenders and servers to create their own new drinks and sell them.

Food and beverage managers such as Rekasis earn about $68,716 on average, according to the 2008 Total Rewards Guide to be published by People Report later this month, which looked at average salaries in 2007.

A sommelier for an independent fine-dining restaurant earns about $69,837, according to the report, which did not look at the category of beverage managers separately.

Most beverage managers say there’s a reason why they tend to be on the young side: The hours are long and grueling, and it’s difficult to balance the demands of work with having a family.

“That’s the one thing about my job I’d like to change: the hours,” Swenson says.

Singh also offers advice to those thinking about beverage operations: “When you’re getting started, there’s a glamour or magic about the idea of being a sommelier. You think you’re going to be a jet-setter, tasting wine all over the world. But no one prepares you for the amount of work you’ll be doing.

“There are inventories, cases to be put away, budgets,” she adds. “In the end, you just have to keep your customers’ needs in mind.”