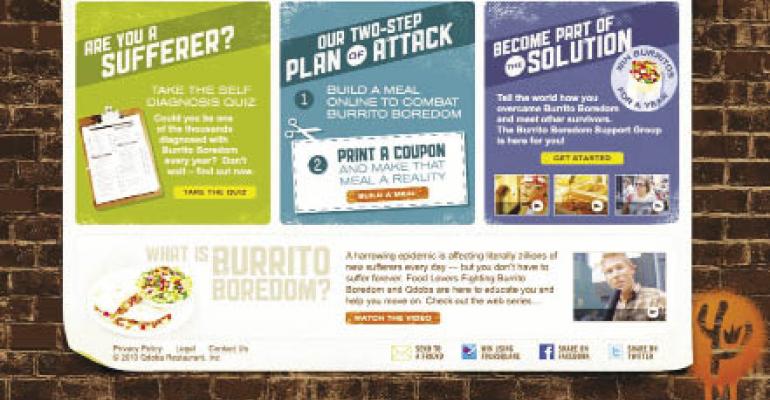 Officials at Qdoba Mexican Grill were pretty sure the brand’s latest digital campaign was the cure for what ailed its customers.

However, those guests weren’t aware they had something wrong with them until Qdoba invented the affliction: Burrito Boredom.

The chain’s “discovery” of Burrito Boredom came from parsing the data from J.D. Power and Associates’ 2010 U.S. Restaurant Satisfaction Study, released in August. That report revealed that nearly half of all quick-service customers order the same thing every time they visit certain restaurant chains.

While such a habit seems  benign to any restaurant operator happy for repeat business, Qdoba saw an opportunity to sensationalize Burrito Boredom and market several treatments and cures, said Doug Thielen, manager of nontraditional  marketing and public relations.

“Our biggest advantage is the breadth and depth of our menu,” Thielen said. “So this was an opportunity to have our guests explore the menu and highlight our differences.”

The resulting digital campaign was Food Lovers Fighting  Burrito Boredom, or FLFBB, which ran from Aug. 24 to Oct. 1. On a dedicated microsite, Qdoba ran a Web-video series on the effects of Burrito Boredom starring Thielen, a quiz for culinary hypochondriacs to  diagnose themselves and a Meal Builder  application that enabled guests to combine Qdoba’s entrées with signature sauces and salsas and get rewarded with coupons. There also was a “support group” where customers could upload 15-second videos of themselves for the chance to win free entrées for a year.

In addition, the campaign tied into Facebook, Twitter and Foursquare, from which guests were picked at random to receive a free meal for checking in and providing the number of their Qdoba loyalty card.

Thielen described FLFBB as Qdoba’s “most robust campaign ever.”

“We didn’t just want to do a Web series or a quiz, which we’ve used in the past and been successful with,” he said. “We wanted options for them to choose from and to  offer more to explore.”

Compared with Qdoba’s previous big marketing push — the “Craft Your Life” microsite, which was used to introduce the Craft 2 menu back in April — FLFBB was even more successful, he added.

“In the first three weeks the FLFBB  microsite was up, it had as much Web traffic as for the entire six weeks of ‘Craft Your Life,’” Thielen said. “We’re sitting here now with well over half a million visitors, and it continues to grow.”

Customers were spending more than three minutes on the FLFBB microsite on average, which Thielen characterized as “fantastic numbers.” The site handed out nearly half a million coupons during those three weeks, and though it was difficult to get an exact  redemption statistic because each coupon was valid for  several days, snapshots from different markets on average revealed redemption rates of  between 15 percent and 20 percent.

There also were nearly 60  video uploads to the website, which was in line with expectations, he added.

“This was really more about crafting your entrée with the Meal Builder, and that went  really viral, since there are lots of different ways to share the site,” Thielen said. “We’ve seen well over 10,000 shares through e-mail or social media, and hundreds of blog posts. … People caught on to the tongue-in-cheek, fun aspect of this.”

For the time being, Qdoba hasn’t crunched the sales data to quantify the correlation between visits to the FLFBB microsite and increases in sales of any Qdoba signatures like the Chicken Queso Burrito. But qualitative  evidence trickling into its headquarters has convinced officials that the program met its goals and will be a part of Qdoba’s long-term marketing arsenal.

“We’ve seen a fair amount of anecdotal conversations on Facebook or Twitter where customers have said, ‘Hey, I found a cure, tried a new burrito, and now it’s my favorite,’” Thielen said. “Our GMs have talked quite a bit about regulars coming in and getting something different. … We’ve had conversations here about the next evolution of FLFBB — you probably won’t see it go away.”

While the coupon handouts from the site ended Oct. 1, the information Qdoba gathered from that execution will drive the next use for certain elements of the campaign at a later date, most notably the Meal Builder.

Thielen added that chain  officials and franchisees were especially pleased with the Foursquare aspect of the campaign, and the ease with which it was able to link in with Qdoba’s loyalty card system. Franchisees keep clamoring for more knowledge on how to leverage a location-based tool like Foursquare, Thielen said, and as social media gets even more localized, it will make digital campaigns even more crucial to nationwide brands.

“One of the reasons we do digital campaigns is because they allow guests to interact with us and our menu in many of our markets that don’t have the penetration to purchase mass media like radio, TV or print,” he said. “It’s a very high level of brand engagement, and in many markets without media efficiencies.”