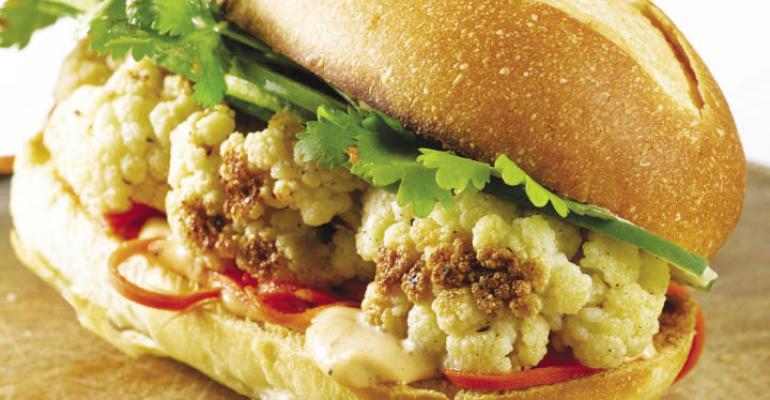 When John Fraser decided to make his New York fine-dining restaurant, Dovetail, vegetarian on Mondays, he had no idea that Meatless Monday was an actual initiative, started by the Johns Hopkins Bloomberg School of Public Health, to reduce meat consumption in the United States.

He just knew that business was slow on Monday, and he wanted a hook to bring in customers.

He also had no idea it would change the way that he cooks every day of the week.

Now, the animal protein is a supporting character rather than the star — it’s there to enhance the vegetable or grain that’s the focus of the dish.

“When you focus on the vegetables, you really see how many options there are, and it becomes a portal for creativity,” he said.

Only 3 percent of the U.S. population is actually vegetarian, about the same percentage as a decade ago, according to the Vegetarian Resource Group, a Baltimore-based nonprofit. But in addition to the 6 million to 8 million vegetarians, Americans in general are growing enamored of local, seasonal produce and meatless menu items for their wholesomeness and health halo, prompting their appearance on menus nationwide.

“I feel as though my customers are just as excited to see ramps, morels and local asparagus in the spring as I am,” said John Manion, chef of Branch 27 in Chicago.

He said one of his best-selling items year-round is his grilled radicchio salad with shaved Brussels sprouts, pecorino and Marcona almonds with dill, lemon and olive oil.

At Num Pang, a sandwich shop in New York whose name is the Cambodian word for “bread,” chef Ratha Chaupoly said between 15 percent and 18 percent of his guests order one of his two vegetarian sandwiches.

One is a sandwich of cauliflower roasted with salt and pepper, served with a spread made from roasted eggplant, tomatoes, vinegar, salt and pepper. It’s served with garlic butter, pickled carrots, cilantro, cucumber and a chile “mayo” that’s made with soymilk instead of eggs, and sold for $6.75.

“We go through a case of cauliflower a day,” Chaupoly said.

Putting things in perspective, David Lipschutz, owner of the Blind Faith Café, which opened in Evanston, Ill., in the fall of 1979, said vegetarian food has always had its omnivorous devotees.

At Johnny Rockets, a 280-unit hamburger chain based in Lake Forest, Calif., the vegetarian Streamliner, which was introduced in 1995, is holding steady at about 1 percent of the sales mix, said a company spokeswoman, who added that, although a vegetarian patty also can be substituted for any of the hamburgers on the menu, that only happens about 50 times per unit per month, out of nearly 11,000 customers on average.

But vegetarian choices are being made at many higher-end restaurants. Anne Quatrano, chef-owner of the fine-dining Bacchanalia in Atlanta, started printing a vegetable tasting menu in 2002 in response to customers who wanted that option in her prix-fixe restaurant. She charges $75 for it, just as she does for her other menus, but the vegetable menu is four courses instead of five.

In 2002, having one guest order that menu in a week would be a lot, she said, adding, “Now, one or two a day is pretty much the standard.”

Bacchanalia does about 100 covers per night, so it’s still not a huge seller, but, like Fraser at Dovetail, Quatrano pays attention to produce in part because of her awareness of vegetarians.

“There are people who have the vegetarian cassoulet first course and then the roasted chicken for the second course.”

For the “cassoulet” Ferraro adds seasonal vegetables and beans to a Parmesan broth.

He froths that with truffle butter and serves that in a ring of blanched garlic shoots for $12.

Back at Dovetail, the introduction of meatless Mondays did turn out to be good for business.

“We’re generally pretty booked up every Monday now,” said Fraser, who started his experiment about three months ago.

The Monday night crowd includes Indians, Muslims and Jews with various religious dietary restrictions, as well as “young, yoga, hot kids who would never come to Dovetail otherwise — it’s not their style.” He said some Monday night customers have started to come in on other nights of the week, too.

Fraser charges $42 for his four-course Monday meal — the same as his Maine lobster entrée and less than the $66 tasting menu served the rest of the week.