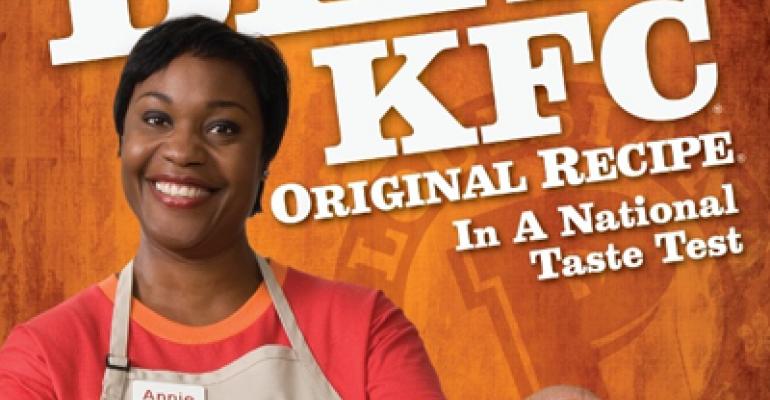 Popeyes gets a boost from taste test campaign

Popeyes Louisiana Kitchen significantly improved its quality perception among consumers with an ad campaign built around its victory in a taste test against KFC, according to research from YouGov BrandIndex.

In late August, Popeyes publicized the results of a taste test in which its signature fried chicken won a head-to-head taste test with rival KFC’s Original Recipe. During the subsequent “Love that Chicken” campaign — which included TV commercials, a celebration in New York’s Times Square and the www.popeyesbeatkfc.com microsite — Popeyes' quality score as measured by BrandIndex rose from 14.6 on Aug. 31 to 27.4 on Oct. 1.

The disparity between KFC’s and Popeyes’ quality scores had been as wide as 17 points at the start of the study but had been slashed to 3 points, according to BrandIndex.

New York-based Brand Index, which tracks customer perceptions of thousands of brands by surveying 5,000 consumers a day, determines quality scores by asking consumers whether they consider a certain brand’s food to be of high quality, and subtracting negative responses from positive ones.

Ted Marzilli, senior vice president of BrandIndex, said Popeyes’ customer satisfaction stores and “buzz” scores — which asks whether consumers had heard anything about a brand, negative or positive, recently — also rose during the same time period, making “Love that Chicken” one of the more successful campaigns of recent years built from a head-to-head competition between brands.

“That’s all a good combination,” Marzilli said. “If you’re increasing buzz, people are taking note of the campaign and the message is sinking in. Satisfaction scores going up tend to imply that people have actually gone to the stores and had a good experience. It seems like they’ve taken action, not just taken notice, based on the ad campaign.”

The taste test has been a popular advertising method since before the “cola wars” of the 1980s. More recently in the restaurant industry, Domino’s Pizza made a tongue-in-cheek ad campaign out of their Oven Baked Subs besting Subway sandwiches in an independent taste test in early 2009. In one of those commercials, Domino’s chief executive at the time, David Brandon, burned a cease and desist letter from Subway, which didn’t recognize the legitimacy of the pizza chain’s claims.

While some consumers always will be skeptical of taste test results being promoted by the contest’s winner, Marzilli said, for the most part, people take the results at face value and usually give the victorious product a try. Sometimes, if there are too many similar ads in the restaurant space, consumers could tune out taste test claims, but it seldom results in backlash.

“In general, the brand that runs a taste test generally sees a positive response to the ad, or at worst, no response,” Marzilli said. “It rarely backfires where people think the company making the claim is doing it in an illegitimate way. So if you’re taking a gamble on an ad like this, it could have a significant payoff, and on the low end your losses are more hedged, because nothing might happen but nothing would hurt your brand.”