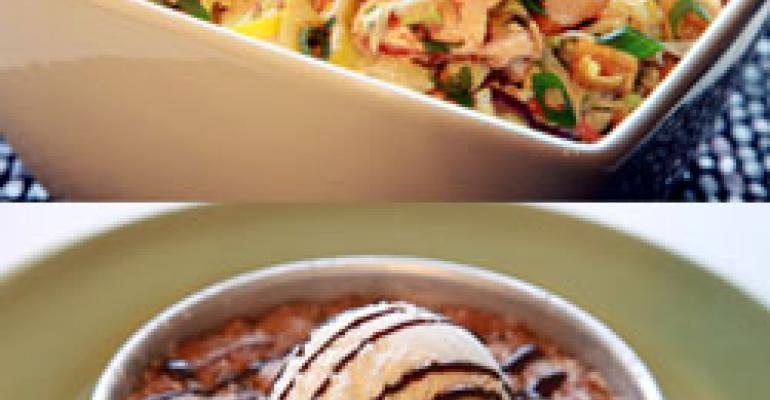 CARLSBAD Calif. Roughly eight months after a management buyout, the owners of the 19-unit Pat & Oscar’s chain are undertaking a menu overhaul, rethinking the restaurants' designs with a new prototype and sparking new franchise growth.

Known for its fast-casual, family-style service for two or four, Pat & Oscar’s new menu includes both an expansion of shared-dish options for six or more people, as well as the option for more individual-sized servings, smaller portions and side dishes, John Kaufman, Pat & Oscar’s president and chief executive, said in an interview Monday.

Kaufman, along with other executives, purchased the Carlsbad, Calif.-based chain from former owner Pacific Equity Partners in January. Terms of the deal were not disclosed.

“Basically we are giving guests the ability to drive their own value,” Kaufman said, referring to the new menu. “It increases add-on opportunities.”

The new menu has been tested during the past six weeks in two Southern California units. The test stores reported an 11-percent increase in average check, from about $7.50 to between $8.35 and $8.50. Sales of family-style meals, which make up about half of the concept’s sales, increased 5 percent with the addition of meals for six or more, Kaufman said. The meals were designed to make the chain more attractive to larger families or groups, Kaufman said.

In addition, diners that share a family meal can now more easily add on a half-rack of ribs, for example, side dishes or salads — an option that was available on the previous menu but not well promoted and difficult to enter into the ordering system.

“The way we dine out has dramatically shifted over the last few years and we want our menu to reflect that,” Kaufman said, while noting that the new menu will be rolled out systemwide within the next six to nine months.

The new menu also includes seasonal dishes with more international flavors, including a Thai-themed Bangkok Chopped Chicken Salad, with sizes ranging in price from $8.69 to $14.99, and a Chipotle Pastrami Melt for $7.99, including a beverage.

Still on the menu are Pat & Oscar’s long-time favorites, such as pizza, pastas, chicken, ribs and salads, served with the chain’s signature hot breadsticks.

The menu overhaul also includes the addition of hand-held menus for the first time, in addition to the long-used menu boards, to allow guests to peruse the menu more thoroughly while in line.

Meanwhile, the company is training franchisees who have taken over five units, with plans to open more franchised units within the same market.

One of the new-menu test units in Irvine, Calif., has been given a new, more contemporary interior design and is being looked at as a prototype store for new locations, Kaufman said.

“We upgraded the colors and the feel without spending huge amounts of money,” he said.