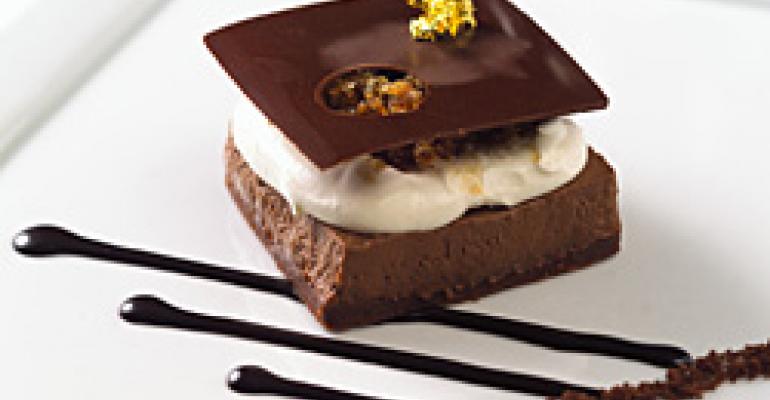 Is there a dessert ingredient more recognized and loved than chocolate? Probably not. But restaurateurs say customers’ current romance with the rich and luscious treat is like a marriage approaching its Golden Anniversary: The familiarity is appreciated, but mix in a few surprises, will ya?

By this point, operators say, chocolate fans have just about seen it all — if not on their plates, then via cooking programs, The Food Network, cookbooks, the local bake shop, articles in food magazines or even demos at the mall. Because of the delectable’s popularity, it tends to be a medium of choice for whomever or whatever is trying to wow an audience interested in food. No longer dazzled by simple sweet joys, diners want to end their restaurant meal with an artful chocolate bang, especially at a time when dining out is becoming more of a budgeted excursion.

“People’s tastes have moved beyond the standard molten chocolate cake,” says Jansen Chan, the pastry chef of New York City’s award-winning Oceana seafood restaurant. “If they’re out spending money, they want something a little more challenging and original, something they wouldn’t make at home.”

The flipside of the coin, he stresses, is that customers want to settle into familiar tastes and surefire delights. “During economic recessions, people go for comfort foods, and chocolate is probably the leading feel-good ingredient pastry chefs work with,” Chan explains. “No matter what, desserts with chocolate are going to sell well, but in times like these, they’re going to do even better than usual.”

The trick, he and others say, is giving diners something comfortably adventurous.

“With less disposable income, customers want to be sure they’re going to get something they will truly enjoy,” remarks Jacques Torres, owner of the renowned chocolate retail and dessert shops in New York that bear his name. Yet “they’re going to be less likely to order a dessert if they see too many unfamiliar terms in its description, because they’ll be afraid of making a mistake and ordering a dessert they won’t enjoy.”

So how do restaurants balance the seemingly bipolar requests?

“It’s all about putting a new twist on an old dish,” Chan asserted. “There are certain key words — ‘cookie,’ ‘brownie,’ ‘sundae’ — that always get people excited for dessert because of their associations with the dishes and the fact that they can wrap their minds around what they’re going to be served.”

Sometimes the chocolate itself is that safe yet novel component, says Bill Corbett, pastry chef of the modern American restaurant Michael Mina in San Francisco.

“I definitely see a new trend in bittersweet chocolate flavors on various menus — in everything from ice creams to pastry creams,” he declares. “Customers love the stronger, richer tastes and the deep, brown color that chocolates with higher cocoa contents produce.”

Meanwhile, restaurants of all stripes are minimizing the risk factors by offering their chocolate desserts in small plates. Patrons can spend a smaller amount for a pared-down indulgence that won’t make them feel like spendthrifts if it ultimately isn’t to their liking. And with several plates ordered by a table, diners can have the adventure of tasting several preparations.

When Oceana moves to a new location in the fall, “our new dessert menu is going to offer two pages of options — one for composed desserts and one for shared desserts,” says Chan. “Customers, in addition to craving classic desserts with a twist, are looking for a communal, fun experience.”

Regardless of how they’re served, “classic chocolate desserts always work well, in good times and bad,” says Torres. “It’s a question of comfort and familiarity. If you use high-quality products and solid techniques, you will always have a good result, no matter what you serve.”