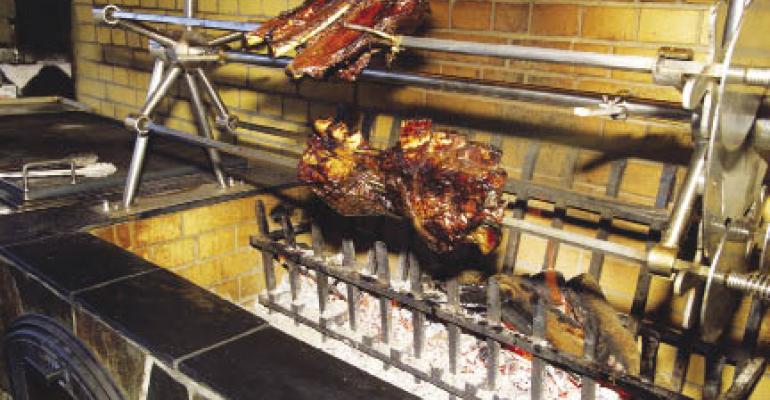 Seeking dishes with the distinctive smokiness and rustic appeal born of flame and embers, a growing number of operators are adopting the age-old practice of wood-fired cooking.

But just because a practice is time-tested doesn’t mean it’s easy. In chasing wood-fired flavor, operators are discovering considerable challenges, including high costs, steep requirements for ventilation and the need for new skill sets.

But, he noted, “sizable” skill is required to operate a wood-burning pizza oven. “Understanding how it heats up and how long to cook multiple menu items is not an easy task,” he said.

Wood-firing also is time consuming. At Tony’s Pizza Napoletana in San Francisco, building a proper fire in the Italian hearth oven takes two hours every morning, reported owner Tony Gemignani. And because wood fires are changeable, the pizzaiolo, or pizza maker, must be able to adjust on the fly.

“Every day is different because you have different types and sizes of wood,” Gemignani said. “That changes the whole dynamic of the oven. A sharp pizzaiolo will understand how the wood will burn and how to keep the oven at a consistent heat.”

Ventilation also is an issue. According to Davella, wood-burning cooking equipment generally is required by code to have a dedicated exhaust hood and flue separate from other kitchen pieces. That can be a major expense, especially if ventilation shafts have to travel long distances.

Still, chefs are hot on the trend of wood-fired cooking. At One Sixtyblue, a contemporary American restaurant in Chicago and one of seven eateries in the Cornerstone Restaurant Group based there, executive chef Michael McDonald said he had a longtime wish come true when a recent kitchen remodel allowed him to replace his gas grill with a new 36-inch wood-burning model.

“[Cooking] with wood and charcoal, we definitely get a stronger sear, which I feel is making the steaks juicier,” McDonald said. “The gas grill never got as hot as I wanted. I’m just much, much happier with this.”

In addition to imparting flavor, the grill exudes an “intoxicating” aroma, he said. “Walking into the restaurant, you get a whiff of the smoke, and you think, ‘Something wonderful is going to happen here.’”

But creating that feeling has a price tag. McDonald said the installation of the dedicated hood and exhaust for his new wood-burning grill amounted to $20,000 — four times what the grill itself cost.

“We have been here 12 years and expect to be here another 12 years,” McDonald said. “If this place was only a year or two old, you might be a little hesitant about investing $25,000 in something you are already doing. But we just wanted that wood-burning, smoky taste.”

Other operators are equally committed to wood-fired cooking. “Bringing authenticity back to the pizza industry is very rewarding,” said Gemignani, who added that his pizzeria is “always busy.”

Chicago-based Technomic Inc. recently found a small increase in the incidence of wood cooking in its Technomic MenuMonitor database. A search revealed 240 entrées out of a total population of 27,882 described as wood-grilled, wood-fired or wood-roasted, up 14 percent for the first half of 2010 versus the first half of 2009.

“Although the total incidence may appear low, it definitely speaks to the growing use of ‘wood’ as a preparation descriptor on menus,” said Technomic executive vice president Darren Tristano.

“Applewood-smoked bacon and smoke flavor in general seem to be cropping up as many chains shift to wood and grilling becomes more prevalent due to the healthfulness which is associated with it versus frying,” he added.

At Pizzeria Ortica in Costa Mesa, Calif., the open hearth of the wood-burning pizza oven is easily fashioned into a grill. “We rake a bed of coals in the front of the oven and put a metal grill over it and use it to cook steaks,” said chef de cuisine Justin Miller. “The flavor is awesome.”

Chef-partner Mark Dommen also offers spit-roasted chicken for two. It requires about 45 minutes of cooking, he said, “but the flavor you get from roasting over wood is pretty amazing.”  One Market’s wood grill is a simple affair with a brick lining, stone exterior and heavy cast-iron cooking grate. It is fueled with almond wood, which Dommen said “burns nice and hot and has a great flavor.” It holds up to five spits of meat, each turning individually.