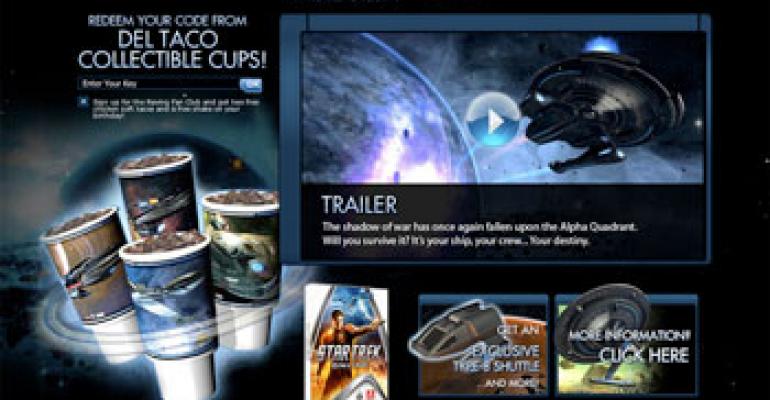 For most restaurant operators there is no game playing when it comes to maintaining or building sales on the backside of a recession, but that doesn’t mean diners can’t have a little online fun.

Del Taco and Qdoba Mexican Grill are two of the latest chains using proprietary or licensed games to hook consumers and their dollars. The respective online games and the menu promotions they support have associated Facebook.com and Twitter.com social networking pages and activities, as well.

The moves follow fast on the heels of efforts from McDonald’s, which provided some of the best known gaming offerings and promotional tie-ins in recent months in connection with the chain’s partnership between its signature Big Mac sandwich and the science-fiction blockbuster movie Avatar.

At 500-plus-unit Del Taco, the chain has partnered with game producer Atari to offer patrons free playing time on the beta test site for the new Star Trek Online game. The personal computer version of that so-called massively multiplayer online, or MMO, game developed by Cryptic Studios is set to formally launch on Feb. 2.

Del Taco has linked the game with its extra large, 44-ounce Macho soft drink, which typically sells for $1.89, and its combo-meals. Customers who make a qualifying purchase from through Feb. 16 receive a plastic collectible Star Trek cup with a peel-off activation code that can be entered at the chain’s www.startrekonline.com/deltaco microsite to receive 48 hours of free online game play.

Consumers who enter codes from four different cups will receive a bonus of 48 additional hours of play, for a total of 10 days of free play, and, if they ultimately purchase the game, will receive free “Type-8 Shuttle” add-ons for their virtual starships.

“Providing Del Taco customers and Star Trek fans a preview of the new online game has been tremendous for the Del Taco brand,” said John Cappasola, Del Taco’s vice president of marketing. “Our existing customers are excited about the promotion and we are reaching another new audience — online gamers.

At Qdoba, which operates or franchises more than 500 fast-casual restaurants, the chain has launched a microsite, www.qdobacraftyourlife.com, to market its new Craft 2 menu, which allows patrons to select two of the chain's most popular menu items for a set price. The microsite includes versions of the old Mansion, Apartment, Shack or House prophecy game, or MASH.

In Qdoba’s version of MASH, single players answer questions about themselves, their possessions, their lifestyles, their food choices and their perfect soulmates and ultimately wind up with what can be a humorous narrative about where their life might lead. There is no purchase necessary to play MASH and participants can enter to win one of thousands of coupons for free food awarded daily.

“We have had great success in the past with engaging with our guests through microsite components, and in this case we thought the MASH game theme was a great way to drive home the choice and variety available through the new Craft 2 offering,” explained Doug Thielen, Qdoba’s manager of non-traditional marketing and public relations.