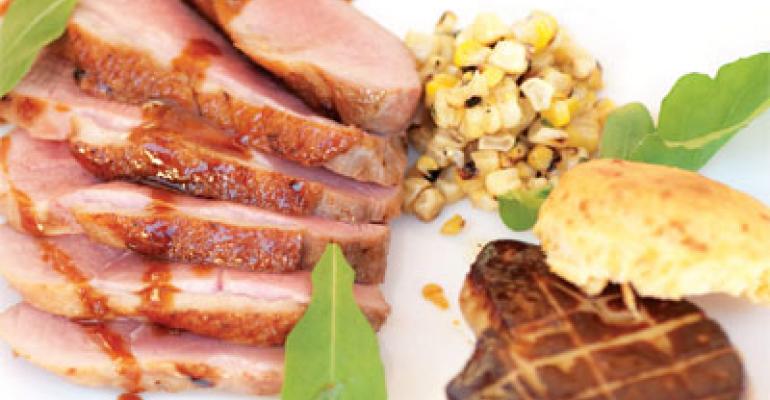 Giving the menu a narrative backstory can entice and entertain customers

Restaurateurs nationwide are striving to create stronger connections with diners by offering food that helps tell a story. Whether educating diners about a particular culture, showcasing the area where an ingredient grew or conveying an aspect of the operator’s personal history, these stories can help boost sales, letting diners feel more engaged with the restaurant, operators say.

Among those finding success with this approach is Michael LeBlanc, owner of Pican in Oakland, Calif., an upscale eatery that tells a story of inclusiveness and cultural blending through its Southern-meets-California fresh fare. LeBlanc, who grew up in the South, aims to expose diners to Southern cooking by blending classic dishes with accents from other cultures. Here LeBlanc talks about the genesis of the nearly 2-year-old restaurant and the power of storytelling through food.

You spent 26 years in corporate America. How did you get the idea to open a restaurant that uses food to tell a story?

I spent time in Ireland, overseas, a number of years in Hong Kong. Yet I still like red beans and rice, fried chicken. I’m a true Southerner. I always felt that there had to be folks that really hadn’t been exposed to good Southern food. But I didn’t think straight Southern could command it. I wanted the food to be a fusion between fresh-style California, but based on Southern fare.

How do you use food stories to boost customer engagement?

For me, food is about family; it’s about connection. I try to impart to the staff that we have to create that Southern gentility — welcoming. I tell servers my philosophy is to “give a story, get a story.” [I spend time] touching tables ... answering questions. In a given night I’ll probably hit 50 percent of the tables. If food can uplift you in terms of either sharing or romance or celebration, people will come back.

What criteria are necessary for a dish to fit into the world you’ve created?

Everything that’s new goes through a brand filter. The criteria for me: Is it a wow? Is it Southern? Is there a California portion to it? Do you think it’s going to sell? For example, I wanted to do something with alligator. Just by being on the menu it’s going to grab folks’ attention. Couldn’t do it as an entrée unless it was a soup — didn’t want to do that. Chef suggested alligator fingers. Now we have Alligator Nachos on the menu ... long plate, bed of chips, shredded lettuce, jalapeño ...

How does food that tells a story help sales?

It definitely boosts sales. If you’re in a good mood, feel like you’re important, the food tastes better. Our best seller by far is the Southern Fried Chicken ... swirled with truffle honey and served with smoked gouda mac and cheese.

Any advice for other restaurateurs who want to use narratives to connect with their customers?

Be clear about what your passion is. Love the story you want to tell, first of all. Make sure you transfer what it is you’re trying to do to the staff. I created a concept book that talks about me and my background, coming from the segregated South, traveling the world, wanting to be an ambassador of the South, the need for inclusiveness. We use that in training staff. Your presence [in the restaurant] also helps with whatever folklore there is. Another part of telling the story is having a chef who’s passionate about [that story]. You can’t just have a technician.