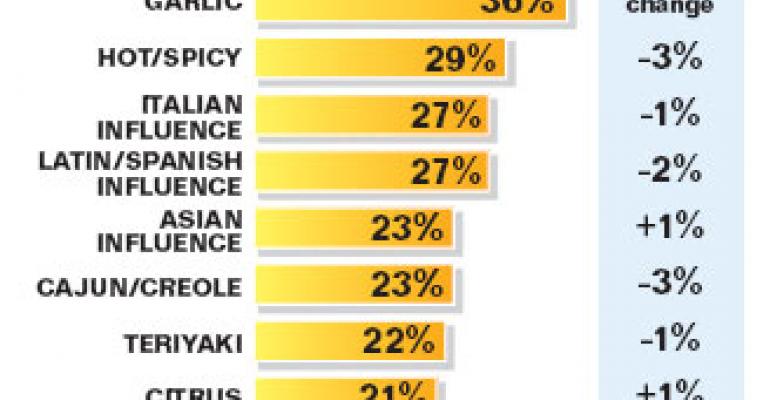 Not so long ago, American menu writers were chiefly focused on a handful of big flavors — Caesar, Cajun, barbecue and Buffalo. At the same time, they looked to such “big” ethnic cuisines as Italian, Mexican and Chinese for inspiration.

But experts say that lineup is changing as consumers increasingly seek new points of differentiation at restaurants.

Data from The NPD Group indicate that the popularity of those big mainstream — or “It” — trends is being whittled away by flavors that are more identified with health, that imply more specific points of origin or that seem exotic but safe.

When NPD asked consumers what flavors they would like to see more often in restaurant meals, the firm found that garlic was the most popular response, and that citrus, berry and chipotle also have become more fashionable.

However, hot/spicy, Italian and Latin/Spanish have decreased in popularity among restaurant patrons over the past five years.

NPD restaurant industry analyst Bonnie Riggs said the shift reflects many subtle factors that are difficult to identify in broad-based consumer analysis. The bump in citrus and berry flavors, for example, may indicate that customers are looking for food that seems better for them, she said.

“And with chipotle, I think they’re not sure what it is, but they’re familiar with it because of the restaurant chain,” she added, referring to the fast-casual burrito brand.
Other responses reveal that customers are looking for ingredients with more specific origins than menus previously provided.

While such changes are not seen as being earth shaking — Italian, Mexican and Chinese, after all, remain the favorite ethnic cuisines — “a lot of opportunity exists for introducing new flavors,” especially when customers are looking for food that’s more healthful, Riggs said.

But even chains not working the health angle are offering new — and somewhat atypical — menu items. For example, 37-unit California Tortilla in Rockville, Md., has taken inspiration from food trucks and is offering such non-Mexican selections as Korean tacos and burritos.

Korean barbecue also has turned up at a next-generation prototype of Baja Fresh in Irvine, Calif., and at the Chinese quick-service chain Panda Express.

On the mild side, the classics still have a role. Chili’s serves chicken tenders with maple barbecue sauce and mini burgers with perennial favorites applewood-smoked bacon, sautéed onions and ranch dressing.