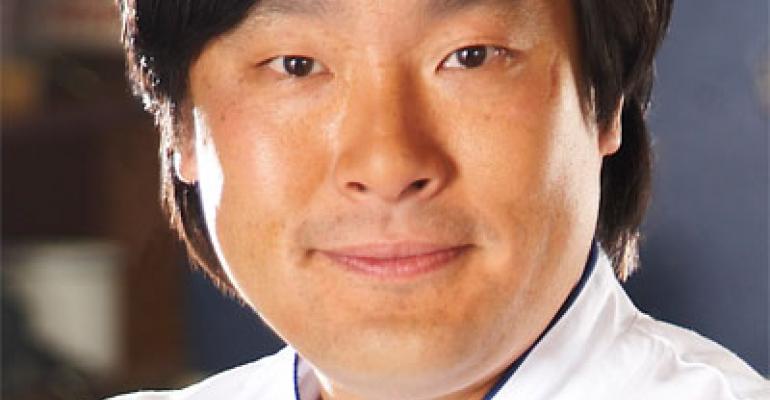 It’s getting more difficult to ignore the cult of the celebrity chef. Turn on the television, and you’ll find half a dozen back-of-the-house-based reality competitions or chef-hosted cooking shows. Walk into a supermarket, and you’ll see scores of retail products branded with a popular chef’s name. Head for the bookstore, and you can pick through shelves of books by well-known chefs.

And we haven’t even begun to talk about restaurant branding opportunities yet.

Clearly, today’s chefs have emerged as celebrities in their own right, some presiding over mini-empires generating millions of dollars from restaurants, television work, branded products and book publishing. Ming Tsai has enjoyed success in all of those arenas — his 12-year-old restaurant Blue Ginger in Wellesley, Mass., is popular with both customers and critics; he recently published his fourth cookbook, “Simply Ming One-Pot Meals”; he is currently in the eighth season of his public TV show “Simply Ming”; and he teamed up with Kellogg’s for his healthy snack food, Blue Ginger Multi-Grain Brown Rice Chips.
Here Tsai offers some insights into the world of the star chef and the ways that leveraging one’s personality can impact the restaurant.

You began your career cooking in the restaurant business. How did you wind up on television?

Prior to opening Blue Ginger in 1998 I had done a little TV work, and I guess I was discovered. A producer said I had presence … that I smiled more than the average chef. So I wound up on a couple of shows like “Ready, Set, Cook” and “Chef du Jour,” and I subbed for Sara Moulton on her show. Then in 1998 we started doing [the Emmy award-winning] “East Meets West with Ming Tsai.” It was on Food Network three times a day. Now we’re in season eight of “Simply Ming” on public TV and in preproduction for season nine.

Does your television work help drive business at Blue Ginger?

Absolutely. No secret that if a chef is on TV cooking, it will help the restaurant. But while fame gets people in the door, you still have to make sure the quality of the food and service remains high.

What’s the hardest part of running such a diversified business?

The hardest thing is learning how to say, “No.” I used to not be able to say no to anything. You need to find a balance. You have to be able to surround yourself with great people that you can trust and that can help make decisions. I don’t want to be overextended.

How do you organize your time?

When we’re shooting the show, we generally shoot for two weeks straight. Those are really hard weeks. On those days I work a couple of lunches a week and dinner service. But I’ve got a great team — my executive chef has been with me for 12 years, the chef de cuisine for 10, the pastry chef for seven — they can run it.

How involved are you in the day-to-day running at Blue Ginger?

Right before service starts, at 5 p.m., I walk the line and try everything but raw protein — vinaigrette, soup, mashed potatoes, even water to boil pasta. I taste about 50 things. Then I expedite when service starts and after that make table visits.

Blue Ginger is your only restaurant. Any plans to open others?

I look at every deal, although I’ve got no plans to open any others right now. I’m always toying with the idea of opening some type of Asian fast-food place — healthy, tasty, inexpensive. But it’s not on the front burner. The timing is not right.

Any advice for chefs who want to diversify?

Take it one thing at a time. Finish a project in its entirety before moving on to the next one. Finally, go into negotiations with the goal of coming out with an agreement. A deal has to be good for both sides. If they make money, I make money. Short sightedness kills deals.