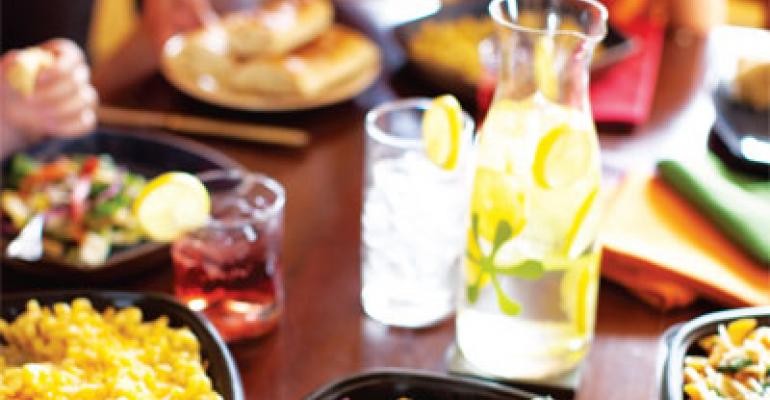 When the recession hit and consumers appeared to lock themselves in their basements, many restaurant companies shifted their emphasis to catering as one way to reach guests where they wanted to be — at home.

Now that the dark clouds are lifting, many operators are positioned to take advantage as corporate clients slowly return to catering events and meetings. Home-based catering also has increased, and many predict consumers will continue to turn to restaurants for their party platters and special occasion buffet feasts.

The recession, however, brought some retrenchment in business catering, and restaurants found that business clients became more sensitive to price, shifting meetings to breakfast when catering options would be less expensive, for example, or hosting meetings at 1 p.m. instead of noon so they could avoid offering a full meal, said Melissa Wilson, principal at Technomic.

In 2009, Technomic took a look at home catering and found that’s where demand was increasing. The research firm estimated in late 2009 that home catering accounted for $33.3 billion in restaurant sales.

“Consumers weren’t dining out as much, but they were still ordering large platters for socializing,” Wilson said. “That was a growing area of eating during the recession, and we think that will continue.”

Catering is seen as a beneficial strategy for a number of reasons, said Dennis Lombardi, executive vice president of foodservice strategies for consulting firm WD Partners. “It generally involves larger transactions, and a fair amount of preparation can be done during off hours, so it offers better utilization of labor.”

However, Lombardi noted that there are challenges to catering.

“The food has to travel and hold well. For a Bloomin’ Onion to travel well — that doesn’t happen,” he said. “And you won’t see much catering by a seafood concept.”
Lombardi added that catering must be a “zero-flaw” operation. “No one wants their lunch for 20 to show up late or with only enough food for 10.”

Still, restaurant operators continue to see an opportunity in catering.

Jill Preston, director of communications for Noodles & Company, said the move was largely the result of consumer demand.

The chain has had great success with its new family-style Square Bowls, a range of pastas available in large to-go bowls that feed four to five people, which were introduced in late 2009.

Over the past year, many customers would order 20 to 30 Square Bowls to serve food at meetings, Preston said. Some restaurant locations would even deliver such large orders, and this year Noodles is developing special “cube” packaging to make it easier to carry the larger bowls out and keep food hot.

The casual-dining Mimi’s Cafe chain also expanded its catering program last year, adding online ordering to make it more convenient, as well as offering more to-go options for breakfast. Menu items at breakfast include flatbread wraps, ham-and-cheddar croissants and ciabatta breakfast sandwiches, which are available in five- and 10-serving options along with plates, utensils and condiments.

The 500-unit fast-casual chain has made an effort to enhance the catering ordering experience, with better training for staffers to help guests select the right menu options.

One of Qdoba’s top sellers for catering is the hot bar buffet, which allows event guests to select what they want from several options. Unlike most chains at that level, Qdoba leaves customers with chafing dishes to keep the food hot. To ensure the chafing dish is returned later, the chain offers guests who return the equipment a free entrée.