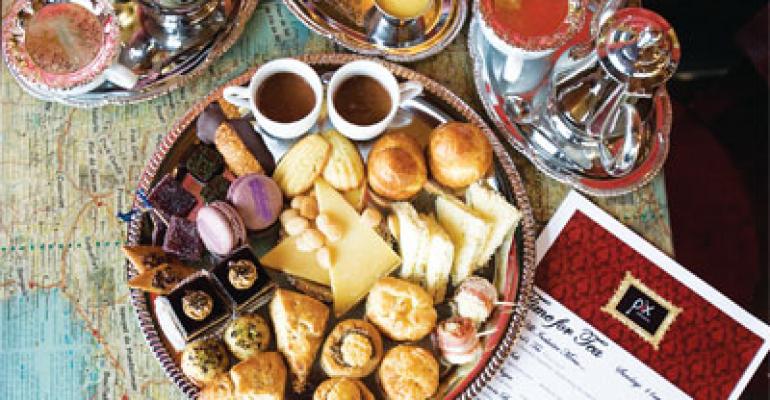 Operators entice diners with creative variations on the fixed-price meal

Whether looking to drive traffic or new product trial by underscoring a value proposition or in support of sampling menus, many operators across all segments rely on a fixed-price bundling strategy.

Beyond conventional fast-food combo meals, such prix-fixe offerings, as the French refer to them, today take several forms, including:

Michael Tuohy, executive chef at Grange in Sacramento, Calif., said the dismal economic climate when that restaurant opened in December 2008 prompted him to offer daily fixed-price specials out of the gate. The 150-seat restaurant with a primarily à la carte menu has per-person averages of $58 at dinner and $20 at lunch, he said.

“I felt it was important to convey to the public that you could get a great deal on any given day via a two-course, $17 option at lunch and a three-course, $35 option at dinner,” Tuohy said.

“The biggest challenge early on was getting the dinner service staff to get behind selling a three-course, $35 menu,” Tuohy acknowledged. “I think once they realized that it created regulars that often spent more by buying better bottles of wine and brought other people in with them, they saw the light.”

For Thierry Rautureau, chef-owner of 50-seat Rover’s in Seattle, fixed prices go hand-in-hand with the five- and eight-course degustation menus he offers nightly for $99 and $135, respectively. He also sells a four-course bistro menu for $59 and multi-course paired wine flights for $30 to $75.

As a concession to some customers, Rautureau has made all of the components of his tasting menus available à la carte, albeit at a premium of about 20 percent above the package rate. But he maintained that the sampling menus are at the heart of the Rover’s experience.

“When you come to a restaurant that does a set menu, the idea is, first of all, that you are trusting their professionalism and their capability to do something different and impressive for your evening; you’re trusting in their craftsmanship,” Rautureau said.

The hardest part of offering a fixed-price menu, he noted, “is to convince enough people every day to walk in through the front door at that price,” as it is high enough to “make the dining experience more of a commitment from the customer’s side.”