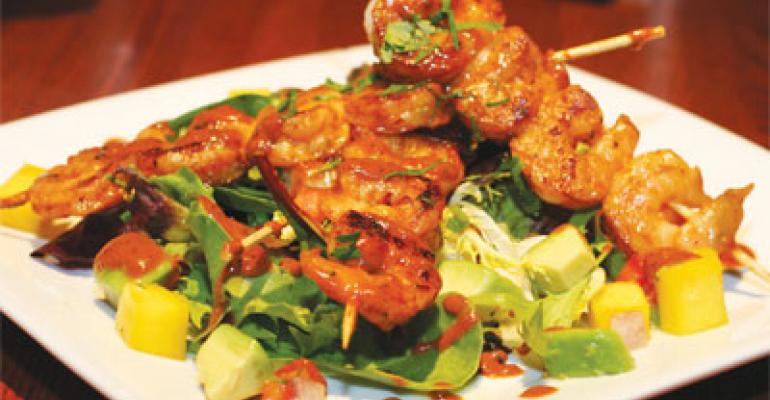 Small plates are proving to be a big attraction at restaurants around the country.
While independent operators began featuring smaller, less expensive portions years ago, recently chain operators have been stepping up to the small plate, too.

Experts note that the smaller offerings serve several purposes. On one hand, they help to attract customers concerned about spending and those worried about their diets.
At the same time, small plates provide bar menus with a new alternative to traditional appetizers and allow chefs to test drive ingredients and ideas that might be seasonal or outside of their traditional offerings.

“As we headed into the recession, all of the sudden small plates became value plates,” said Darren Tristano, executive vice president at Technomic Inc., a Chicago-based market research firm. “By allowing consumers to purchase at a smaller price point, we’re very much on track with what consumers are looking for.”

He also noted that some consumers are concerned about large portions and feeling guilty about taking home leftovers, while others want to avoid paying higher prices for what they consider to be too much food.

Smaller plates are good menu additions for operators looking to buoy sales and increase their profit margins, too, observers say.

“Operators are able to offer smaller plates at premium prices, and many consumers order multiple small plates, which can bring the average check up to a pretty consistent level,” Tristano said. “Because you’re not adding much to inventory, the food cost isn’t that high, and as result, pretty good margins can be built into small plates.”

That appears to be the case at Los Angeles-based California Pizza Kitchen, which debuted its “Small Cravings” menu early in 2010. During the company’s second-quarter conference call last year, chief operating officer Sue Collyns said average check prices were up by 20 percent — due in part to the Small Cravings menu — and that the items had boosted incremental sales.

CPK’s Small Cravings menu items are priced from $4 to $7, while the restaurant chain offers its appetizers for $7 to $11. The small plates’ portions are smaller than appetizers and can be shared by two people or act as a small meal for one. Items include grilled marinated Korean BBQ Steak Tacos, Spicy Chicken Tinga Quesadilla and an Asparagus and Arugula Salad.

One of the biggest fears about adding small plates, however, is that consumers will shun standard menu items and their higher prices and opt instead for a smaller, lower-priced plate, said Eric Giandelone, an analyst with market research firm Mintel.

Ideally, smaller plates could be used to lure consumers looking for a quick snack during off-peak hours.

“That’s the hope,” Giandelone said. “But it’s hard to know whether that actually plays out until you try it.”

“We see groups of 10 come in and have small plate parties,” Wuenschel said. “We’re the local meeting place for friends.”

Bar Louie favorites include Tempura Shrimp with a trio of dipping sauces, $9.99; Hummus, Tabbouleh and Tzatziki, $7.99; and Chicken Nachos with spicy cheese sauce, $10.49.