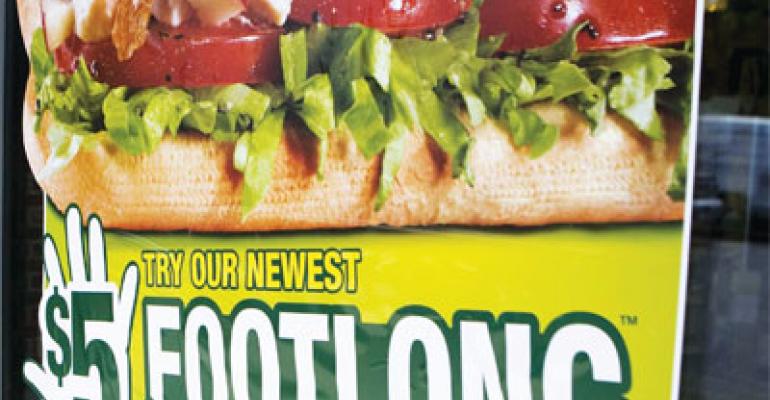 Like soldiers on the front line, restaurant franchisees often are the first to see opportunities for new menu items that can dramatically alter the product battlefield.

Many iconic menu items have been the brainchildren of franchise operators: McDonald’s wouldn’t be the chain it is today without The Big Mac and the Egg McMuffin, both of which were concocted by franchisees. And Subway’s hugely popular $5 Footlong also rose from the franchise ranks.

“Most of the great ideas we have come from franchisees,” said Michael Shumsky, chief executive of the 625-unit CiCi’s Pizza of Coppell, Texas. “We as corporate guys have to think of our role as being facilitators to get information from the franchise community.”
The franchise operators see what the guests are gravitating toward, and can often predict the direction of consumer tastes.

Domino’s Pizza said this past fall that it is closely watching sales of a new egg-cheese breakfast pizza at a 24-hour unit in Dayton, Ohio. The pizza was introduced by a franchisee to appeal to students at the nearby University of Dayton. Executives are looking to see if it is a product that can expand to other stores.

Consultants say astute chain executives pay close attention to products that franchisees might suggest, and then run the traps on bringing those products to the entire system.
That was what happened when Stuart Frankel, a two-unit Subway franchisee in Miami, noticed that sales were sagging on weekends. To remedy that, Frankel began offering a “round number” $5 Footlong on Saturdays and Sundays. He saw sales increase 17 percent to 20 percent on Saturdays and as much as 30 percent on Sundays.

Subway executives noticed the results and rolled out the $5 Footlong to the entire system in March 2008, providing a catching value message just as the nation was diving into a recession. The Footlong, according to The NPD Group consultancy, generated $3.8 billion in sales for its first full year.

Similarly, McDonald’s franchise owner Jim Delligatti first debuted the Big Mac in 1967 at a McDonald’s in Uniontown, Pa., and the company added it nationwide a year later. Delligatti and his family opened the Big Mac Museum Restaurant in North Huntingdon, Pa., on the 40th anniversary of the sandwich in 2007.

And the Egg McMuffin was created in 1972 by franchisee Herb Peterson of Southern California, who died in 2008.

Even smaller chains tap into their franchisees’ creativity. The 315-unit Pizza Inn, based in The Colony, Texas, last year introduced the Loaded Baked Potato Pizza after district manager Chris Cuthbertson of Greenville, S.C., came up with the idea.

“Nobody knows our customers and their taste buds better than team members like Chris who serve them every day,” said Charlie Morrison, president and chief executive of Pizza Inn. “The success of the Loaded Baked Potato Pizza is proof that fantastic ideas can come from within.”

Franchisees also provide input on everything from image to facility signage, cost controls and marketing.

“The idea of getting input from franchisees,” said CiCi’s Shumsky, “is a core philosophy of our business.”